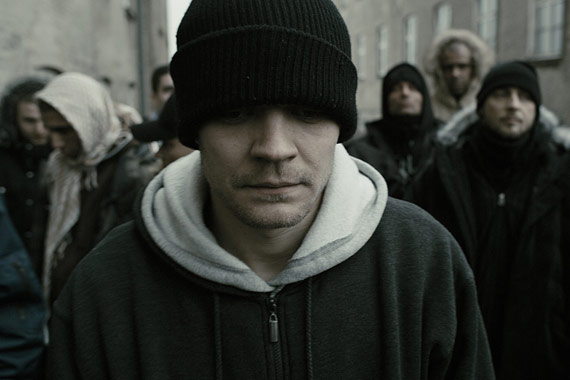 The prison drama “R” from young Danish directors Michael Noer and Tobias Lindholm will be released theatrically in the U.S. by Olive Films in early 2011. “R” premiered at LA Festival earlier this Summer.

The prisoner R arrives to Denmark’s toughest prison, where he is to serve a sentence for violent assault. R is reduced to a number, a letter, just another inmate.  The prison is a parallel world filled with rules, honor, and debts. A world, in which bars cover the windows and blood stains the floor. R is placed in the most hardcore ward. Here he must find his place in the system, learn to navigate, and fight for survival.

Shot on location in the oldest standing prison in Denmark, this powerful drama traces the intertwined fates of two newly incarcerated inmates. The R of the title stands for Rune—played in a courageous lead performance by up-and-coming Pilou Asbæk—a cocky, good-looking young inmate placed in a hardcore ward where the other cons are twice his size. R also stands for Rashid, a young Muslim prisoner who becomes Rune’s friend and accomplice, challenging the highly charged racial tension that runs through the prison’s population. Pungently physical, utterly unsentimental, R pulls no punches as it takes us deep inside the dank walls of Denmark’s most notorious prison.