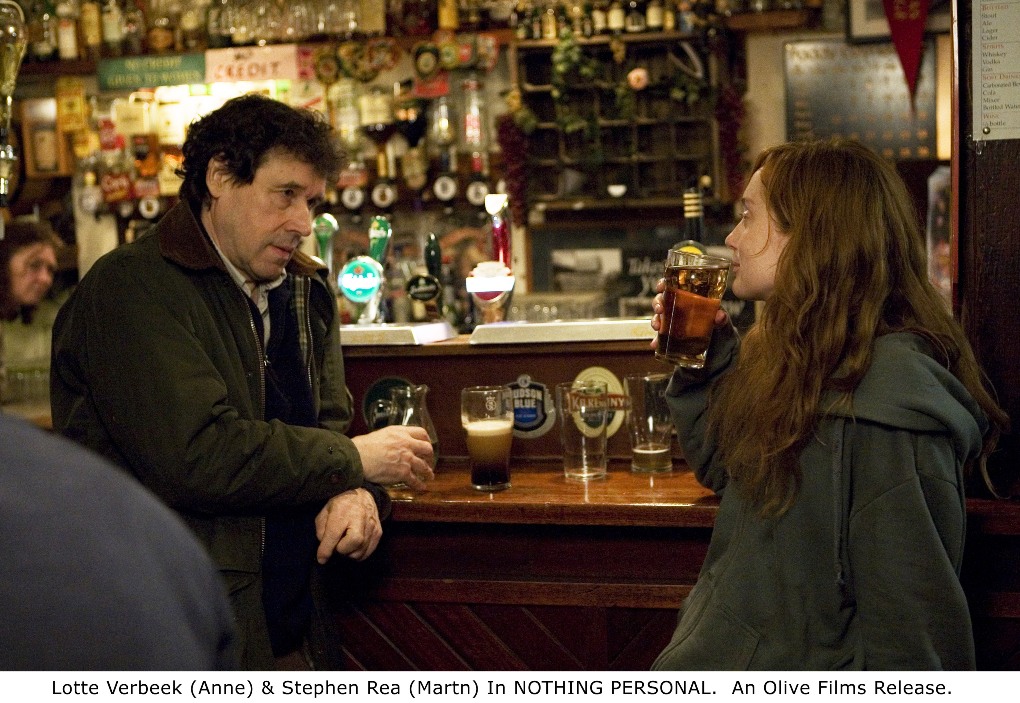 Olive Films will present the US Theatrical release of NOTHING PERSONAL, a film by Urszula Antoniak.  Winner of Best Actress Award for Lotte Verbeek at Locarno and Marrakech film festivals, as well as the Winner of Best First Feature and Fipresci Prize at Locarno, and Best Film and Best Director award at the Dutch Film Festival, NOTHING PERSONAL will open at Cinema Village in New York on November 19, and at Sunset 5 in Los Angeles on November 26.

Alone in her empty flat, from her window Anne (Lotte Verbeek) observes the people passing by who nervously snatch up the personal belongings and pieces of furniture she has put out on the pavement. Her final gesture of taking a ring off her finger signals she is leaving her previous life in Holland behind. She goes to Ireland, where she chooses to lead a solitary, wandering existence, striding through the austere landscapes of Connemara. During her travels, she discovers a house that is home to a hermit, Martin, (Stephen Rea). He is a man in his prime living a solitary life in a secluded house on a beautiful island. She is radical and uncompromising. He is wise and ironic. What connects them is solitude they both see as freedom. He proposes her to work for him in exchange of food. She agrees at one condition: there will be no personal contact between them, just work. Soon the two of them become curious about each other and want both: to keep their “nothing personal‟ deal and to break it. Their simple life follows the cycle of days and nights, work and rest but slowly brings the two of them closer to each other. Who will be the first one to break the deal?

Urszula Antoniak’s stunningly assured debut is touching, gentle and playful. But it takes a firm stand when it comes to negotiating individual freedom and the urge to still wanting be near to somebody – despite all wounds of a past we don’t get to know in detail. An enigmatic beauty and confusion underlies this character study that should leave nobody unmoved.

Holland-based Polish director Urszula Antoniak has graduated from both the Polish and Dutch Film Academies. Her film “Bijlmer Odyssey” was one of the few Dutch television productions that was sold in many territories in and outside Europe. Her comedy about integration in Holland “Dutch for Non Advanced” has drawn attention of  both audience and critics. “Nothing Personal” is Antoniak‟s feature film debut, an international co- production featuring Stephen Rea, shot in Ireland, Holland and Spain. Like Antoniak’s other pictures “Nothing Personal” combines poetic images with light irony.