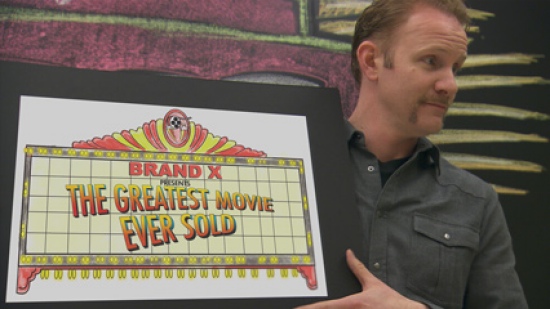 The Sundance Film Festival hasn’t even started yet and another documentary film has reportedly been acquired. Reelmovienews is reporting that the documentary The Greatest Movie Ever Sold which is set to premiere Saturday at the festival has been acquired by Sony Pictures Worldwide Acquisitions for distribution in U.S. and Canada.

We live in an age where it’s tough even to walk down the street without someone trying to sell you something. It’s at the point where practically the entire American experience is brought to us by some corporation. Utilizing cutting-edge tools of comic exploration and total self-exploitation, Spurlock dissects the world of advertising and marketing by using his personal integrity as currency to sell out to the highest bidder. Scathingly funny, subversive, and deceptively smart, The Greatest Movie Ever Sold shines the definitive light on our branded future as Spurlock attempts to create the “Iron Man of documentaries,” the first ever “docbuster”! He may very well have succeeded. | Sundance Film Festival

The film is expected to be released by Sony in April.