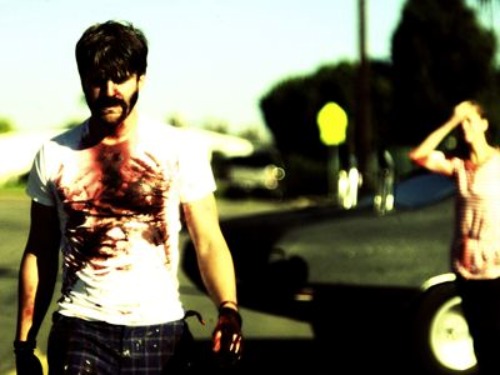 The film was written and directed by Glodell and stars Glodell, Jessie Wiseman, Tyler Dawson, Rebekah Brandes, and Vincent Grashaw, who also produced the film through Coatwolf Productions, his company with Glodell.

Bellflower follows two friends who spend their time building flamethrowers and other weapons in the hope that a global apocalypse will occur and clear the runway for their imaginary gang, Mother Medusa, to reign supreme. While waiting for the destruction to commence, one of them meets a charismatic young woman and falls in love—hard. Quickly integrating into a new group of friends, the pair set off on a journey of betrayal, love, hate, and extreme violence more devastating than any of their apocalyptic fantasies.

With highly stylized photography and editing, Bellflower is an exhilarating, character-driven joyride. Fueling this narrative with fantastic imagery and extraordinary performances, writer/director/actor Glodell elevates the ordinary experiences of friendship and romance into the stuff of legend.
Evan Glodell enthused “We’re insanely excited that Bellflower will be released by Oscilloscope, and are extremely grateful that we’re being introduced to the world with a company that is so supportive of the artists they work with.” | Sundance Film Festival

Adam Yauch, head of O-scope, said, “Everyone at The Scope is ecstatic to be working with such a talented filmmaker and release his amazing and unique directorial debut. Evan even promised to rig my Prius with a flame thrower that runs on bio-fuel.”