Screen Media Films to release ‘FUBAR: Balls to the Wall’ 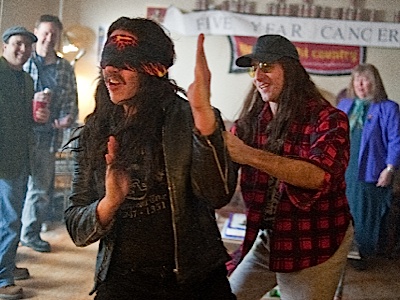 Screen Media Films has acquired North American rights to FUBAR: BALLS TO THE WALL, Michael Dowse’s hilarious look into the lives of headbangers Dean and Terry that stars Paul J. Spence and David Lawrence, prior to its U.S. premiere at the 2011 SXSW Film Festival.  The deal was announced by the company’s President, Robert Baruc, who plans to release the film on VOD and home video on April 19, 2011.

Headbanger relics, Terry (Dave Lawrence) and Dean (Paul J. Spence), are tired of trying to give’r while barely scraping by, so when their old buddy, Tron (Andrew Sparacino), hooks them up with jobs they head up North to make sweet cash working on the pipelines during the holidays.  Flush with money and confidence, Terry starts dating Trish (Terra Hazelton), a local waitress, and things get serious in a hurry. Meanwhile, Dean is playing up the part of ‘cancer survivor,’ and upon hearing about the glories of Worker’s Compensation, purposely injures himself in an attempt to qualify.  When Terry then moves in with Trish, Dean does his best to save his buddy from swapping the banger life for domestic captivity, but his own life starts to spiral out of control when the Workers’ Compensation Board denies his claim and his doctor shows up out of the blue with some fateful news.  Completely broken by his own self-destruction, Dean must rise to take control and fight for the things that mean the most: his family, his friends, and Christmas.

“We were immediately drawn to the fun nature of the film and think Dave and Paul have created indelible characters that appeal to the headbanger in all of us,” says Screen Media president Robert Baruc.  “SXSW is the perfect festival for the film as it embodies everything ‘Dean’ and ‘Terry’ stand for – good times, good beer, and good friends.”

Adds director Michael Dowse, “I am thrilled to be slapping FUBAR’s ball to American walls this spring, a partridge will be shotgunning beers in a pear tree.  We couldn’t have a better partner than Screen Media to bring FUBAR: BALLS TO THE WALL out to American audiences with.”