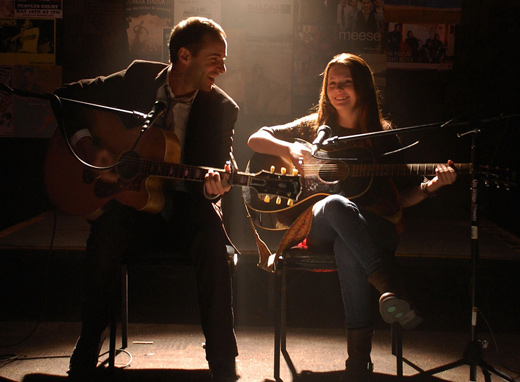 Tribeca Film has acquired all U.S. rights to Unified Pictures’ Janie Jones and will release the film theatrically in multiple U.S. markets, as well as on video-on-demand and other platforms in the summer of 2011. The authentic and charming rock ‘n’ roll road trip drama about a father and daughter finding their way to each other through music stars Academy Award® nominee Abigail Breslin (Little Miss Sunshine), Alessandro Nivola (Coco Before Chanel), Academy Award® nominee Elisabeth Shue (Leaving Las Vegas) and Brittany Snow (Hairspray). Janie Jones was written and directed by David M. Rosenthal, whose own life experiences inspired the story.

Janie Jones, which drew praise following its world premiere at the 2010 Toronto International Film Festival, follows a 13-year old girl left in the custody of her burned-out rock star father, Ethan, whom she has never met, when her mother checks into rehab. With no feel for fatherhood, Ethan’s drug and booze-fueled antics on tour take their toll on and off stage as his band deserts him one by one. As Ethan’s self-destructive spiral threatens to derail his career, Janie uses her own surprising musical talents to help guide him along the rocky road to redemption.

“Janie Jones is especially notable as a showcase for the extraordinary talents of Alessandro and Abigail, whose on-screen musical performances are nothing short of revelatory,” said Geoffrey Gilmore, Chief Creative Officer of Tribeca Enterprises. “David Rosenthal has brought to life an inspiring and warm-hearted story that we are proud to present to audiences through Tribeca Film along with our founding partner, American Express.”

“This film is incredibly dear to me,” said director David Rosenthal.  “I didn’t meet my daughter until she was eleven years old and it was perhaps the most profound moment in my life. Janie Jones captures that emotion. So, knowing Tribeca Film is treating the release of the film with such care is a great comfort to me – not to mention very exciting.”

The film was produced by Unified Pictures Founder and President Keith Kjarval and Eric Bassett and is rounded out by an impressive indie cast including Peter Stormare (The Imaginarium of Dr. Parnassus), Frances Fisher (Titanic), Frank Whaley (Swimming with Sharks) and Joel Moore (Avatar). The film’s vibrant original music is by Eef Barzeley of the acclaimed alt-country band Clem Snide.

“It became evident to us very early on that Tribeca Film is the right home for Janie Jones,” said Kjarval. “We’re really impressed with the Tribeca team and the creative strategy they’ve outlined for the release of the film and excited to introduce Janie Jones to viewers across the country.”

Nick Savva, Director, Acquisitions for Tribeca Film, negotiated the deal with Keith Kjarval along with CAA.