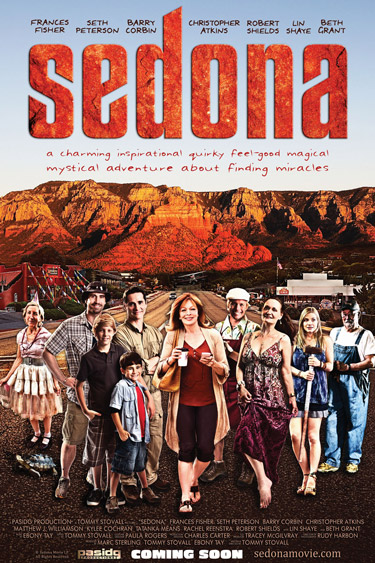 With the strongest field of foreign films in its 17-year history and a diverse lineup of shorts, documentaries, animations and full-length features, the Sedona International Film Festival will screen 145 films – including “Sedona, The Motion Picture” – at three venues from Feb. 20-27.

Comedian Jonathan Winters will receive the Lifetime Achievement Award at the Festival — following a screening of a film featuring the renowned funny man, “Certifiably Jonathan” — in a presentation by fellow comic Rita Rudner. Rudner will also be honored when her new film screens. She and her husband, Martin Bergman, will screen their newest film, “Thanks”, at the Festival.

A tribute to the career of character actor Rip Torn is planned as is a screening of a selection of his films. Actors Nicholas Cage, Gary Sinise, Francis Fisher, Beth Grant and David Rasche, among others, are scheduled to be in Sedona as is director Phil Rosenthal (“Everyone Loves Raymond”) with his documentary about producing a similar show in Russia.

Turner Classic Movies’ Robert Osborne has selected three classic films for screening at the event including “North by Northwest,” “The Heiress” and “The Third Man.”

The Festival also will feature seven environmentally focused films as well as films that deal with border issues, inspiration through the arts, games and sports, gay and lesbian themes, indigenous cultures, family, women’s issues, war and politics, spiritual and metaphysical, inspirational stories of mentally or physically challenged individuals, education, the issue of aging, Jewish interest, animal interests and the worlds of children.

Foreign films from 18 countries have been accepted into the Festival.

“We are reaping the benefit of some incredible buzz out there about our Festival,” said Executive Director Patrick Schweiss.  “Filmmakers from countries around the world are thinking of Sedona as a very viable place to show their films.”

A special preview premiere screening of “Sedona:  The Motion Picture” will kick-off the festival one night early on Saturday, Feb. 19.   The film, starring Francis Fisher, Barry Corbin and Beth Grant, was shot in and around Sedona and features a score by Ebony Tay (“Hate Crime”) performed by musicians from The Juilliard School.

The soundtrack was recorded in natural settings throughout Sedona, including in caves, to capture the indigenous sounds of the region. A live, pre-film concert will kick-off the festivities featuring music and musicians on the soundtrack.

Among the other 145 films to be screened:
• “The First Grader” (United Kingdom), the true story of an 84-year-old Kenyan villager and ex Mau Mau freedom fighter who fights for his right to go to school for the first time to the education he could never afford.
• “Healing:  Miracles, Mysteries and John of God” (Brazil), the story of João Teixeira de Faria, also known as John of God, who channels the spirits of more than 30 dead doctors and saints for spiritual and physical healing at his spiritual center in Brazil.
• “Exporting Raymond,” director Phil Rosenthal’s experiences making “Voroniny,” the Russian-language version of “Everybody Loves Raymond.”
• “Lt. Dan Band:  For the Common Good,” a documentary about Gary Sinise’s band, named after the character he played in the film “Forrest Gump.”
• “Blue Eyes” (Brazil), David Rasche’s gripping drama about immigration.
• “100 Voices: A Journey Home,” by Ed Asner’s son, Matthew, who will be in Sedona.  The film follows 72 cantors visiting Poland where cantorial music started and was decimated by the Holocaust.
• “Forks Over Knives,” a documentary examining whether our “diseases of influence” can be controlled, or even reversed, by rejecting our present menu of animal-based and processed food.
• “Arpaio’s America,” a documentary by the Stanford University Law School which examines immigration enforcement in Maricopa County.
• “A Marine Story,” which looks at the military ban on gays through the personal story of one courageous woman.
• “Under the Boardwalk:  The Monopoly Story,” about how the classic board game has become a worldwide cultural phenomenon by following the colorful players who come together to compete for Monopoly World Champion.

Films will be screened at the Harkins Sedona 6 Theatres, in a special theater at the Sedona Rouge Resort where patrons can enjoy food and cocktails during the films and at the brand new Sedona Performing Arts Center at Sedona High School in West Sedona, a 750-seat theater.

Priority Platinum and Gold Passes and 10 and 20-ticket packages are on sale now.  Priority Pass holders are the first to be able to select tickets to the individual films as well as other benefits.

Platinum Passes are $695.  Sedona Film Festival members pay $525 for advanced purchase.  Platinum Passes include priority tickets and seating, access to the Filmmaker/VIP Lounge and all receptions, parties, the Awards Ceremony on Sunday, Feb. 27 and “Oscar on the Rocks,” a live Academy Awards telecast and celebration that evening.

Gold Priority Passes are $395.  Members pay $295 in advance. Gold Passes include priority tickets and seating to all films.

Packages, other than for full-time students, can be purchased online at www.sedonafilmfestival.com or through the Festival Box office at (928) 282-1177.  Student packages must be purchased through the Box Office and student ID’s are required.

Individual film tickets will go on sale in February.

FEATURES
1981, The 5th Quarter, Among Us, Anita, Blue Eyes (Olhos Azuis), Boy Wonder, Cast Me If You Can, Certifiably Jonathan, The Choice, Close to the Sun (Yun Shang Tai Yang), Desert Flower, Face to Face, First Dog, The First Grader, The Happy Poet, The Heiress, Illegals (Illegales), John Rabe, The Last Lions, Made in Dagenham, A Marine Story, Monogamy, Necessities of Life, North by Northwest, Poetry, Poppies: Odyssey of an Opium Eater, Queen to Play, The River Why, Sasha, Sedona, Snowmen, The Tender Hook, Thanks, The Third Man, The Vintner’s Luck, Vision: From the Life of Hildegard von Bingen, Ways to Live Forever, Who Am I, The Yankles.