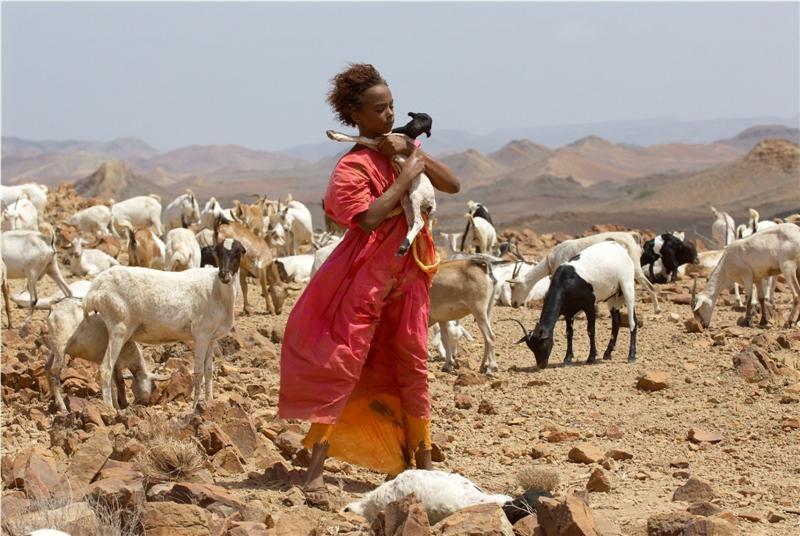 Sherry Hormann’s film Desert Flower is the true story of the life of supermodel Waris Dirie, and a very important one to be told. The film is based on her autobiography and brings us through the amazing journey from her life in Somalia as a child to her shift into modeling stardom in London and eventual women’s rights activism. The execution of this story, however, is less than impressive. It follows pretty conventional modes of narrative, with some obvious and sentimental scenes and plot devices. But it is saved from being a predictable made-for-TV type of film by a very strong cast and moments of poignancy.

We begin in Somalia, glimpsing Waris’s rural childhood (the first shot being a rather obvious close-up of a flower in the desert), and then we shift into modern day London (being the late 1980s, although we are never given a date) and see the 18 year-old Waris, played by the striking Liya Kebede,  now a lost and homeless African immigrant. The narrative continues to jump back and forth between her childhood in Somalia and adulthood in London and New York, so at least we’re saved from a completely prosaic chronological timeline; the cuts into flashbacks help change up the scenery. In London where the main story begins, Waris meets Marylin, her first friend (played by the ever wonderful and boisterous Sally Hawkins), who helps her to get a job, encourages her to enjoy life, and becomes her confidant for revelations of her painful past. Waris is soon discovered by a kind-hearted fashion photographer (Timothy Spall) in the fast food restaurant where she works and is then on her way to becoming a supermodel, after getting a snooty modeling agent (Juliet Stevenson), learning how to walk in heels, and overcoming some immigration obstacles. As a subplot, there is a small and weak love story—Waris briefly meets a handsome New Yorker, Harold (Anthony Mackie), in a London club and finally, years later, goes to find him in New York.

The important and most powerful part of Waris’s story, however, is not her modeling career but how she deals with her painful experiences of being circumcised and nearly sold into marriage, which leads to her activism with the UN against Female Genital Mutilation. The subject of FGM comes up early in the story when she is shocked to find that Marilyn and the majority of other British women have not been “cut”, and she shows Marilyn how she has. The treatment of much of the story can be sentimental and obvious, but this sensitive and difficult subject is handled very well in the film. The scene between Waris and Marilyn is natural and affective, and the gradual explanation of Waris’s experience is also well done.  She eventually gives a full account of her memory of the procedure in a magazine interview, and we are given the last and most powerful flashback, a straightforward and agonizing scene of the three-year-old Waris subjected to what millions of girls around the world go through every year.

The significance of the subject matter in this film made me wish it was made by more capable hands. The director/writer Hormann is a well regarded German director, but I found the direction and writing of the overall film rather weak. There are countless shots and montages that are artificial and obviously rendered—from a shot of Waris’s little brother hopelessly looking up at the sky after Waris has left her family and we’ve just seen her get on a plane for England, to the montage of Waris being photographed nude in which Harold suddenly appears, a sensual figment of her imagination, and a jarring and silly idea. The plotline also falls short, with many rushed and unbelievable scenes. This can be attributed to the large amount of information being communicated in the film; it’s a very full life being portrayed, so pieces of her story are often squished together into a series of messy scenes. A different director could have perhaps handled the many aspects of Waris’s life more naturally, while still being effective.

The cast helps save this film, however, as well as some lovely cinematography by Ken Kelsch (especially for the scenes in Somalia) and a great musical score by Martin Todsharow. Kebede is a perfect choice for Waris—she is graceful and awkward at once, believable as both a lost African immigrant and a supermodel turned activist, perhaps because she herself has had a very similar life to Waris’s. She also handles the dramatic scenes very well, from her heartbreaking narration of the final flashback to the moving speech given at the UN. The supporting cast gives us an array of excellent British actors who deliver spot-on performances, and often add welcome comedy to the film. Desert Flower should be seen, if only for its powerful true story and presentation of extremely relevant global issues, as well as for its superb cast, however clumsy the narrative may be at times.

In English and Somali with English subtitles.
Opens Friday, March 18, 2011.