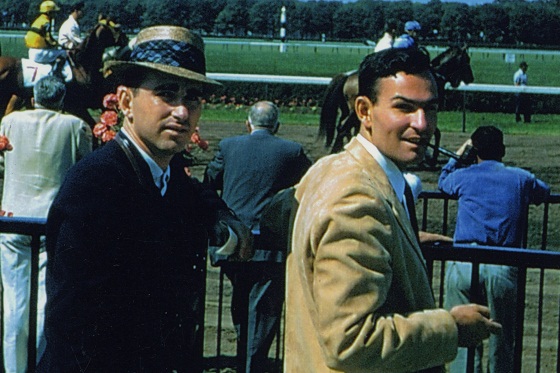 The documentary Renée world premiere at the 2011 Tribeca Film Festival. Directed by Eric Drath, the film documents the transsformation of all-American boy Richard Raskind to Renée – the first transsexual player in the women’s US Open.

Despite his alpha-male reputation, tennis ace Dick Raskind always felt different from other guys. But it wasn’t until his 40s, after getting married and having a son, that Dick was reborn as Renée Richards. Renée was still dynamite on the tennis court, but being the first transsexual player in the women’s US Open would put her in a spotlight she—or her troubled son—couldn’t escape. This fascinating doc is a testament to both personal and athletic perseverance.

VIMOOZ: What brought you to make a documentary on this subject?

ED: I’d heard of the story– in New York City growing up, my family was big on tennis; the US Open was always on, etc. And in 1973, my sister actually went to Dr. Richard Raskind because she had an eye problem– that was before the change. So I knew about the story and followed it.

VIMOOZ: When and how did you first meet Renee Richards?

ED: Well I started looking more into the story and tracked her down two years ago, when my previous film was being released by HBO.

VIMOOZ: Was she and her family on board with the project right away, or did it take some convincing?

ED: She was reluctant at first, but then she was on board. Various members of her family cooperated; not all of them, but some. We interviewed her son, and sister, but not her ex-wife.

VIMOOZ: How long did the film take to make?

VIMOOZ: Have the subjects of the film seen it yet? If so, what was their reaction?

ED: No one has seen it yet, so it will be interesting at the premiere (at Tribeca) to see what their reaction is.

VIMOOZ: What draws you to making documentaries about sports and athletes?

ED: The sports world is the perfect place for real drama– the stories behind sports are just as exciting as the sport itself. There are very rich storylines.

VIMOOZ: Is this your first time at Tribeca? How do you feel about having your film here?

ED: Yes. I’m not sure how I feel yet– we’ll see how it goes. We were excited to get in; it’s an important festival, so it was nice to be accepted.

VIMOOZ: What has the experience been like, getting the film distributed?

ED: There’s always a time when you have a moment of “Oh no, who’s going to buy this film?” You have no idea where it will end up. There’s a  scary point after making a film when you’re not sure what you’ll do with it, and creatively, you don’t know who will be interested in seeing it. So you have to be honest and ask yourself “Who’s going to watch this?” But I have a great feeling about this film, like I did about my last one.

This is a true independent film. My friend and I had this idea, and we just went out and did a film, like we did with our last one (Cornered: A Life Caught in the Ring), which won an Emmy for Sports Documentary. We came up with our own money for Renee, and submitted it to IFP (Independent Filmmaker Project), and they accepted it, and then we met up with ESPN, and sold it. ESPN has been a fantastic partner– they really know how to work with directors.

VIMOOZ: Which other festivals will the film go to?

ED: Frame Line Festival, in San Francisco, and we’re looking into other festivals, but nothing is official.

VIMOOZ: Are you working on any new projects?

ED: I am, but we can’t release the information yet. It’ll be exciting when we do release it.