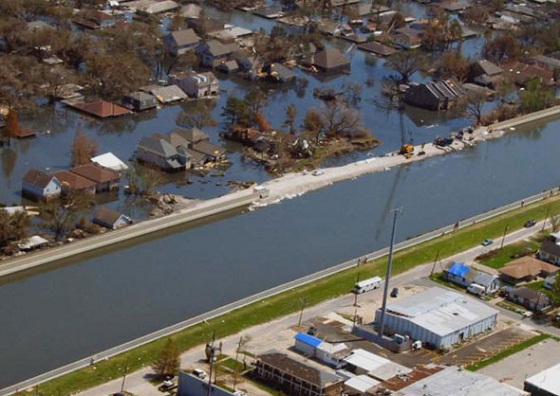 There have been some important documentaries about Hurricane Katrina, including Spike Lee’s epic When the Levees Broke, and the very personal Trouble the Water, but Harry Shearer’s The Big Uneasy is worth seeing for a whole new perspective on the disaster, one that was far from “natural.”

Shearer (an actor and comedian, as well as New Orleans resident) presents a wealth of data and evidence proving undoubtedly that it was the many engineering and design flaws, largely the work of the US Army Corps of Engineers, which led to the flooding of the city. He interviews three main figures, two academic scientists and an Corps engineer, whose expertise and knowledge in the field is indisputable, and whose findings have led to one losing his job, and the others being ostracized. The two scientists, Robert Bea and Ivor van Heerden, were part of two separate scientific investigations examining the levees, and how, why, and when they broke. Their investigations were largely ignored and led to big lawsuits with little results. The engineer Maria Garzino worked with the Corps prior to Katrina testing the pumps that were meant to keep flooding water out of the city, but that were defective and “temporarily” installed anyway. She released a memo warning of these defects, and hit wall after wall of federal and governmental authorities.

These three testimonies make up the core of the film’s argument, but some other enlightening aspects of the film’s investigation include the debate about the wetlands surrounding the city, which provide a natural defense against hurricanes but are severely depleted, and a new design option for New Orleans, mimicking the use of water in places like Holland, where the water running through cities has been designed into tributaries rather than damned off. The documentary also goes back decades in time to the “Mr Go” project in the late 50s– the first huge engineering mistake made in New Orleans, never repaired, and part of the reason for the flooding.

The Big Uneasy gives an almost overwhelming amount of new information that has not fully been released to the public before, and although it is in some ways a conspiracy, it is rooted in fact, and the cover up is simply abominable. The film certainly incriminates the Army Corps and the US Congress, but the interviews with Corps employees and soldiers speak for themselves. The cinematic style of the documentary is something to be desired; it’s mostly talking heads, documents highlighted onscreen, and some celebrity voice-overs, as well as animated sequences mapping out the flood, but an original style isn’t the goal of the film. Rather, like An Inconvenient Truth, it seeks to give crucial information to the public in an effective manner. One hopes that it will escape the controversy of the former film; unless you work or endorse the Army Corps, I don’t see how you could have mixed feelings about the information given. To balance the scientific talk, Shearer attempts to provide some sardonic wit and a more personal perspective on the subject with an appearance by John Goodman, and input from regular New Orleanians about their city. And, so as not to fully depress the audience, the film attempts ends on a hopeful note for the future.

Opens Friday, May 20th in NYC