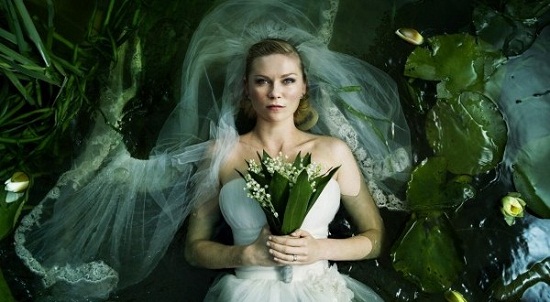 Lars von Trier was banned from Cannes this year, after a ridiculously off-handed remark about “understanding Hitler” blew up to epic proportions.

“Melancholia,” the latest film in the bratty bad boy’s ever-expanding oeuvre, is truly epic in its own right.

The film opens with a bolt of sound that is Wagner and a truly mesmerizing and lush montage of gorgeous set pieces, which play themselves out later in the film. From there, we dive jumpily right into the wedding day of Kristin Dunst’s Justine, who is marrying an aw-shucks guy who still can’t believe his great luck (Alexander Skarsgard) and is contending with simmering guests and relatives -sharky but cordial boss Stellan Skarsgard, hilariously pissed off wedding planner Udo Kier, truly viperous mom Charlotte Rampling, exasperatingly careless and adorable dad John Hurt, had-it-up-to-here brother-in-law John played by Kiefer Sutherland, (neatly carrying the film on his back at one point,) and ready to explode, and weary, martyrish sis Claire, played by Charlotte Gainsbourg. Justine is also battling, we see as the day wares thin to evening, severe manic depression.

Claire and John are throwing this wedding for Justine on their estate which could be in England, (Denmark) could be somewhere in the US, we have no idea- one thing we learn right away- that there is a mysterious, new planet called Melancholia is due to pass right by Earth, and the entire wedding party seems entirely disconnected from what could be the end of the world.

Seeing as John and Claire have no discernable occupation and are simply “filthy rich,” and seeing that weeks after the wedding, which melted down to ashes by the end of the night, Justine can barely make it into a cab to go and visit her sister, she is so entrenched in her own sadness, it is easy to see this film as some sort of statement on the vapidness and futility of our time spent on earth, or depth of the human condition as we know it now. It is said that von Trier has and was battling his own depression when making this film. It really doesn’t matter hat his bad boy antics or state of mind is- he has made an honest to goodness masterpiece, both visually and emotionally, and one which relies heavily on American narrative filmmaking-without the morality injected into practically all of it today.

Because as the inhabitants of this tiny family come together, in their own way, we are to ponder not “what we do, and how would we do it?” How would we survive knowing, as Claire’s young son says at one point, “there is nowhere to hide?” But rather, we are allowed to bear witness to the strange voluptuousness of giving entirely into one’s own emotions, rather than being tousled by the gridlock of despair itself.

Justine, even near paralyzed with what looks like grief, has the upper hand when the end of days grows near. Why? Well, it is curious that her nephew calls her “Auntie Steel-Breaker,” but it is really the fact that she is able to languish, and languish so beautifully (there is even a scene, shot long, with a nude Dunst prostrate on the bank of a small river, as she looks at the approaching, gloriously CGI-ed Melancholia approaching Earth, that looks like a far-out, breath-taking version of an Old Master portrait) that draws even her fed-up, patient sister into muttering “You have it so easy, don’t you?” Because Claire is only and always in a general state of anxiety and mild despair. The type most of us are in point or another. The kind that takes energy, that takes willpower to overcome, that takes an earnest desire to change. All traits which are vividly anti-death. All traits which are, as well, rather exhausting, after awhile. Even at the the end of the film, as Justine not only is able to face death with a calm serenity, but soothes her nephew over her hysterical sister’s ultimately useless cries of anguish, she is the strong one. She “knows,” ultimately, that we are alone, and we must deal with our imminent demise alone.

It is the very voluptuousness of both Justine’s “sickness” and Dunst’s performance, which one simply cannot say enough about, which gives the film a strange vitality I can never recall experiencing before when watching a film. Actually, the closest thing would be the last half of “2001, A Space Odyssey”- when image, narrative (and in this case truly beguilingly perfect and spot-on performances by Dunst, Gainsbourgh and Sutherland) combine to allow the viewer to feel something is being fed into the head and soul by entirely different channels. As Justine says at the end of the film, “I know things.” Well, I’m not quite what von Trier really knows, but there is nothing of the fable, parable or moral to this film. It’s a meticulously orchestrated slate to appear clean, although it’s quite loaded at the same time. As Justine is able to do, von Trier seems to be encouraging us to give in to whatever feelings we may too frightened of releasing. But not for any particular reason, of course. Just because, as Dunst’s Justine inflicts her own sorry state on everyone who knows her, he can.Go and see this film, which plays at this week’s upcoming New York Film Festival. It’s a marvel of image, idea and performance.