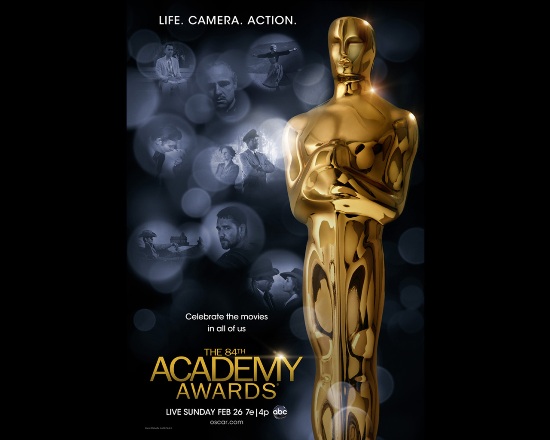 The Academy of Motion Picture Arts and Sciences unveiled the poster for the 84th Academy Awards®. The art features the iconic Oscar statuette alongside memorable images from eight films spanning eight decades: “Gone with the Wind” (1939), “Casablanca” (1943), “Giant” (1956), “The Sound of Music” (1965), “The Godfather” (1972), “Driving Miss Daisy” (1989), “Forrest Gump” (1994) and “Gladiator” (2000). All the films featured on the poster won the Academy Award® for Best Picture, except “Giant,” for which George Stevens won the Oscar for Directing.

Supported by the tagline “Celebrate the movies in all of us,” the design is meant to evoke the emotional connections we all have with the movies. “Whether it’s a first date or a holiday gathering with friends or family, movies are a big part of our memory,” said Academy President Tom Sherak. “The Academy Awards not only honor the excellence of these movies, but also celebrate what they mean to us as a culture and to each of us individually.”

The artwork was created by award-winning graphic designer Anthony Goldschmidt, and Mark and Karen Crawford of the design firm Blood&Chocolate.