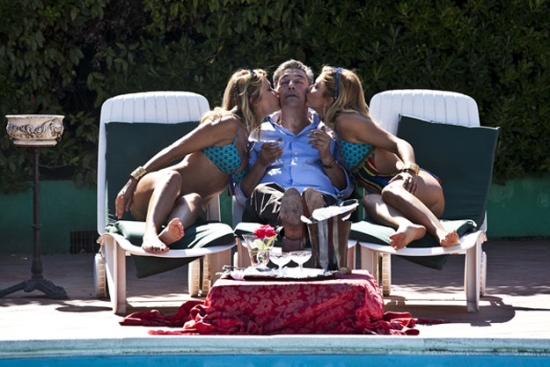 “The Salt of Life” is a charming film by Italian actor and filmmaker Gianni Di Gregorio, who plays an aging man trying to come to grips with the fact that he feels like a “discarded engine on the side of the road.” Treated like with condescension by his wife, dealing with a petulant and spoiled daughter, and with an aging mother who treats him like a servant. Gianni (also the character Di Gregorio plays in the film), recently retired, soon begins to watch his older compatriots embark on affairs with younger women, and conspires to do the very same.

This is a sweet, adorable little movie, and a perfect anecdote for those mid-Winter blues. Di Gregorio (most recently of the 2010 hit “Mid-August Lunch”) is a terrific performer, and everyone in the film plays this light comedy to perfect and enlivening pitch. Watching Gianni tear his hair out, as well as soon his old black book (bearing up very few phone numbers) looking for the woman who will save him, one feels the poignancy that certain longings can never quite be satisfied.

Especially the great and endless desire to once be young once again.

Please go and see this delightful film at the IFC Center in NYC this weekend and next week, and soon at the Laemmle’s Theaters in Los Angeles.