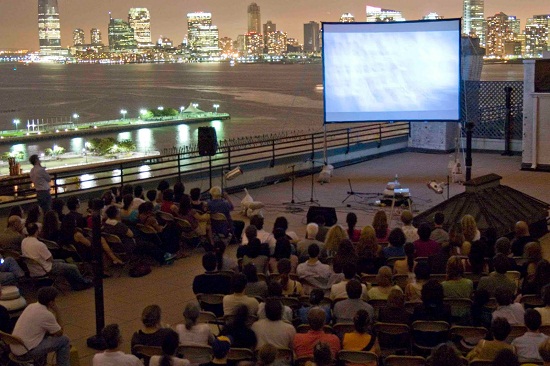 Rooftop Films announce the feature film lineup for the 16th Annual Summer Series presented by AT&T, featuring over 45 outdoor screenings with huge crowds, live music, spectacular venues and the best in new, independent, and foreign films. This year’s edition kicks off with some of the greatest new short films from all around the world on Friday, May 11th at Open Road Rooftop at New Design High School in the Lower East Side, and a special preview screening of Think of Me, starring Lauren Ambrose, on Saturday, May 12th also at Open Road Rooftop.

Rooftop Films has continued to experience remarkable growth since their initial single screening on the roof of founder Mark Elijah Rosenberg’s tenement building in 1997 and the focus remains on leveraging their grassroots popularity to bring out big crowds and shine a spotlight on new independent films that might otherwise never get the attention they deserve.

Acting as innovators and leading an event-based film marketing revolution, Rooftop Films has helped enable the success of many alumni, including Wasteland, Trouble the Water, Holy Rollers, Winnebago Man, and numerous others. In addition, through their Rooftop Filmmakers’ Fund, they help more powerful, understated films not only be seen, but made; films such as Beasts of the Southern Wild, Martha Marcy May Marlene, The Patron Saints, Nancy, Please, and The Tsunami and the Cherry Blossom have received production or post-production support via the Rooftop Filmmakers’ Fund and gone on to have tremendous success at festivals and reaching wide, appreciative audiences.

However, the popularity and longevity of Rooftop Films comes primarily from the fact that their events take audiences beyond the average multi-plex movie going experience. This year is no different.

“Our aim at Rooftop Films,” says Founder and Artistic Director Mark Elijah Rosenberg, “is to immerse our audiences in new worlds, to bring them places they wouldn’t otherwise go, to provide intimate looks into unique lives. I’m excited about our feature film programming in 2012 because it includes daring and personal films on a wide range of subjects, from a diverse collection of filmmakers, and with every film we’ll be providing a unique cinematic experience.”

During the weekend of June 6-8, Rooftop Films will be presenting three films from the SXSW Film Festival to New York City: Caveh Zahedi’s (I am a Sex Addict) political documentary The Sheik and I, Matthew Lillard’s (Scream, SLC Punk) comic feature debut Fat Kid Rules the World, and Amy Seimetz’s dramatic thriller Sun Don’t Shine, about a road-trip gone bad.

Please find below the full line-up for the 2012 Summer Series listing of feature films. All shows include live-music before the screenings and most include filmmaker Q&As and after parties with complementary open bars. The Summer Series will also include over 20 programs of short films. The full schedule including locations and dates will be announced in the coming weeks.

Friday, May 11, 2012
This is What We Mean by Short Films
Opening Night of Rooftop Films 16th Annual Summer Series will feature grand stories in little packages, with some of the greatest new short films from all around the world.
Venue: Open Road Rooftop (350 Grand Street, LES)
Tickets, films and more info at: www.rooftopfilms.com

Additional 2012 Feature Selections will include: (in alphabetical order)

An Oversimplification of Her Beauty (Terence Nance)
http://oversimplification.mvmt.com
Terence Nance’s explosively creative debut feature documents the relationship between Terence and a woman as it teeters on the divide between platonic and romantic.

Bovines (Emmanuel Gras)
In the fields, one sees them, wide in grass or grazing peacefully. Large placid animals which one believes to know because they are livestock. Lions, gorillas, bear have all our attention, but did one ever really look at cows?

Detropia (Heidi Ewing, Rachel Grady)
http://lokifilms.com/DET_newspress.html
Detropia is a cinematic tapestry of a city and its people who refuse to leave the building, even as the flames are rising.

Dicke Maedchen (Heavy Girls) (Axel Ranisch)
http://www.dickemaedchen.com/Home_engl.html
Sven shares his entire life, the apartment, even the bed with his mother, who is suffering from dementia. But when she takes off, Sven goes on a journey that turns his life upside down.

Gayby (Jonathan Lisecki)
http://www.gaybyfilm.com/gayby.html
Jenn and Matt, two best friends from college who are now in their 30s and single by choice, decide to fulfill a youthful promise to have a child together… the old-fashioned way. Gayby will screen during Gay Pride weekend.

Grandma Lo-Fi (Louise Johansen)
At the tender age of 70 Sigríður Níelsdóttir started recording and releasing her own music straight from the living room. 7 years later, she had 59 albums to her name with more than 600 songs – an eccentric myriad of catchy compositions mixing in her pets’ purrs and coos, found toys, kitchen percussion and Casio keyboards.

Her Master’s Voice (Nina Conti)
Internationally acclaimed ventriloquist Nina Conti takes the bereaved puppets of her mentor and erstwhile lover on a pilgrimage to ‘Venthaven’ the resting place for puppets of dead ventriloquists.

I Think It’s Raining (Joshua Moore)
http://ithinkitsraining.com/
Starring and featuring original songs written and performed by Alexandra Clayton, I Think It’s Raining is a music-infused San Francisco portrait of a young woman at odds with who she once was and who she will become.

Inocente (Sean Fine, Andrea Nix Fine)
http://fine-films.com/inocente.php
At 15, Inocente refuses to let her dream of becoming an artist be undermined by her life as an undocumented immigrant forced to live homeless for the last nine years. Rooftop and the Fledgling Fund present a series of screenings and art workshops for adults and youth alike.

Kid-Thing (David and Nathan Zellner)
A fever-dream fable about a rebellious girl who spends her time roaming the land, leaving destruction in her wake.

Kumaré (Vikram Ghandi)
Kumaré is a documentary about a man who impersonates a wise Indian Guru and builds a following in Arizona. At the height of his popularity, the Guru Kumaré must reveal his true identity to his disciples and unveil his greatest teaching of all.

Love Story (Florian Habicht)
A chance encounter between a man and a woman on a train leads to a day of adventure and discovery in this romance written on the streets of New York.

Only the Young (Jason Tippet & Elizabeth Mims)
Kevin and Garrison are boyhood friends in a sleepy California suburb. They share a love of skateboarding, an evangelical Christian faith and a sense of confusion about romantic relationships.

The Imposter (Bart Layton)
A documentary centered on a young Frenchman who convinces a grieving Texas family that he is their 16-year-old son who went missing for 3 years.

The Patron Saints (Brian Cassidy & Melanie Shatzky)
http://www.thepatronsaintsfilm.com
The Patron Saints, a recipient of the Rooftop Filmmaker’s Fund grant, is a disquieting and hyperrealistic glimpse into life at a nursing home. Bound by the candid confessions of a recently disabled resident, the film weaves haunting images, scenes and stories from within the institution walls.

The Sheik and I (Caveh Zahedi)
http://thesheikandi.com/
Commissioned by a Middle Eastern Biennial to make a film on the theme of “art as a subversive act,” independent filmmaker Caveh Zahedi (I Am a Sex Addict) goes overboard when told that he can do whatever he wants except make fun of the Sheik.

The Tsunami and the Cherry Blossom (Lucy Walker)
http://thetsunamiandthecherryblossom.com/
Survivors in the areas hardest hit by Japan’s recent tsunami find the courage to revive and rebuild as cherry blossom season begins. Supported by the Rooftop Filmmakers’ Fund.

The Waiting Room (Peter Nicks)
http://www.whatruwaitingfor.com/
The Waiting Room is a character-driven documentary film that uses extraordinary access to go behind the doors of an American public hospital struggling to care for a community of largely uninsured patients.

Think of Me (Bryan Wizemann)
http://www.thinkofmemovie.com/
“Trembling with vulnerability, Lauren Ambrose is positively devastating” (The New York Observer) as a young single mother doing her best not to fall apart.

Welcome to Pine Hill (Keith Miller)
http://welcometopinehill.com/
A recently reformed drug dealer working as a claims adjuster receives earth-shattering news that compels him to make peace with his past and search for freedom beyond the concrete jungle of New York.