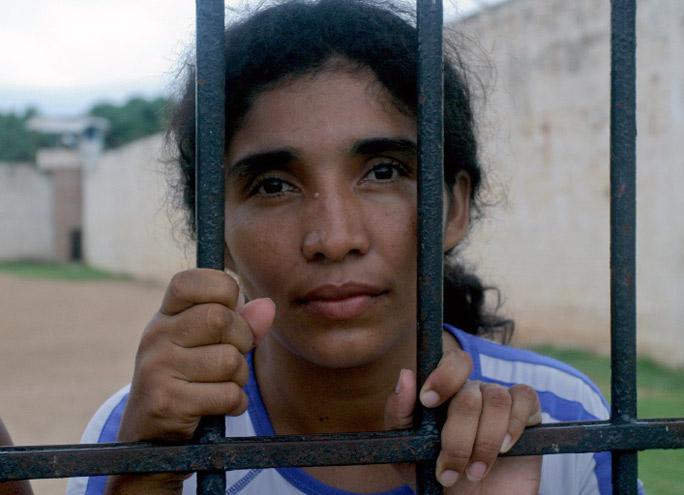 Please don’t forget to check out the remaining two weeks of the  Docuweeks 2012, the incredible film festival of the International Documentary Association, playing at NYC’s IFC Center through August 30th. There are some great, new, Oscar-worthy documentary films playing there now, and VIMOOZ will be giving you capsule reviews throughout the festival. (Docuweeks started in Los Angeles today, August 10th, at the Laemmle Noho 7 Theater.

One wonderful documentary is We Women Warriors, which “follows three native women caught in the crossfire of Colombia’s warfare who use nonviolent resistance to defend their peoples’ survival. Colombia has 102 aboriginal groups, one-third of which face extinction because of the conflict. Trapped in a protracted predicament financed by the drug trade, indigenous women are resourcefully leading and creating transformation imbued with hope. We Women Warriors bears witness to neglected human rights catastrophes and interweaves character-driven stories about female empowerment, unshakable courage, and faith in the endurance of indigenous culture.”

Nicole Karsin, the director the doc of We Women Warriors, speaks with VIMOOZ:

Vimooz: One of things that I love about We Women Warriors is your incredible dedication to the film and its mission. Can you outline briefly, from start to finish, how you became first involved in the film?

Nicole Karsin: I lived in Colombia for seven years and shot this film mostly during 2006-2009. Using my hard-earned access as a journalist, I traveled between several villages during three years to chronicle a few exceptional native women using the wisdom of words and the tribal tradition of collective actions to defend themselves amid ongoing combat. Fluent in Spanish, and savvy about traveling in Colombia’s conflict zones, I sometimes became a one-person production team, shooting alone in the Colombian countryside. At other times, I traveled and worked with a small, committed Colombian crew.

I moved to Los Angeles in 2009 with my film’s first rough-cut in hand. The following three years were dedicated to post production: re-editing, seeking funding and feedback. I participated in fellowships offered by Film Independent and the National Association for Latino Independent Producers, both of which were tremendous sources of support and helped me craft my film to the best of my ability. In May, I completed a successful Kickstarter campaign that raised $50,000 and enabled me to complete the film. From June until present I have been securing archival footage and music rights and undergoing final post.

Vimooz: Can you tell us a bit of your background? Was it primarily academic, or always film/media-based?

NK: I never studied film, but I got my Masters in Journalism, which was a great training for reporting and interviewing, very important skills for docs.

Vimooz: What kept you going back to Colombia? I know you have a few heavy stories to tell! It wasn’t the safest of areas you were shooting in, is that correct?

NK: I actually lived there for seven years, so it wasn’t a case of returning. Though I did return to do a couple pick up interviews after I returned to LA in 2009. But yes, it was difficult. In a three-month period in 2005, I covered the brutal massacre of someone I knew and respected, as well as intense combat that ravaged northern Cauca forcing entire communities to evacuate. I also was affected at the time by assassination attempts against Colombian journalists, who were colleagues and friends.

Vimooz: Two part question: What would be the dream result of this film getting distribution in the theatres, or a venue like HBO: For the film’s mission itself, and for your own career as a doc director?

I’m delighted that my film is participating in DocuWeeks, which I’ve attended over the past couple years. It’s been a showcase of incredible documentaries and a source of inspiration. I did not expect my world premiere to be an Oscar-qualifying screening, but I’m grateful for this opportunity. Currently, I’m focusing on these two weeks of screenings. But the film will screen in Mexico in November, which thrills me because it’s a critical audience to reach.

Of course I would love to secure distribution in all territories, theatrical releases worldwide and to have HBO pick up my film along with my post tab. But right now the film’s life is just about to begin, and I’m excited to see how it unfolds. We’ll see what the distribution gods have in mind. In terms of my own career – I want to make more documentaries, and I’ll be appreciative to have graduated from the first-time filmmaker status.

Vimooz: Did you self-fund a majority of the film yourself? Was Kickstarter a huge help?

NK: I did. I got several grants, a couple large anonymous donations, and did years of funding appeals & events using my fiscal sponsor to offer tax-deductible donations. My Kickstarter campaign was to secure finishing funds and it succeeded.

Vimooz: For the fledging documentarian, where can they go with the seed of an idea? Should they try getting grants for their project? Or is going through Kickstarter and their friends the best bet?

NK: They should submit to all grants and funding opportunities, as well as conducting their own fundraising campaign, which includes but should not be limited to Kickstarter. Also, it’s important to actively seek out feedback and support, attend workshops & discussions like those organized by the International Documentary Association and apply for fellowships like those offered by Film Independent and the National Association for Latino Independent Producers, all of which were tremendous sources of support and helped me craft my film to the best of my ability.

Vimooz: What are some of your favorite docs and directors?

NK: WHEN THE MOUNTAINS TREMBLE directed by Pamela Yates was the film I most tried to emulate while making my film. I also love Yate’s subsequent GRANITO: HOW TO NAIL A DICTATOR. Other films I love include Jennifer Fox’s REINCARNATION, Bernardo Ruiz’s El REPORTERO, and THE LIGHT IN HER EYES by Julia Meltzer and Laura Nix. Yes, I am citing most of POV’s 25th season because it’s amazing and fresh in my mind. There are so many fabulous films that move and inspire me, perhaps too many to name. Ah, Lucy Walker’s WASTELAND was wonderful, as was CALL ME KUCHU by Katherine Fairfax Write and Malika Zouhali-Worrall.

Vimooz: Can you tell us about your next, upcoming project? We can’t wait to hear!

NK: I have another short documentary I shot in Colombia and a short I shot In Chiapas, Mexico, both of which require post funding to complete. I have a strong desire to shoot a documentary in a region other than Latin America. Southeast Asia really enthralls me. For the moment, I am going to enjoy the premiere and life of my first film, deal with distribution and develop the film’s engagement campaign so it can be used as a tool for social change. But I will definitely continue to make films, and I’m happy to keep Vimooz in the loop.

Thank you so much, Nicole, and great luck with the film!

You can hear Nicole speak at a Q&A TONIGHT, August 10th,  at the IFC Center in New York after the 9:45 pm showing of We Women Warriors, or please be sure to catch it this weekend and all next week at IFC NYC for Docuweeks.