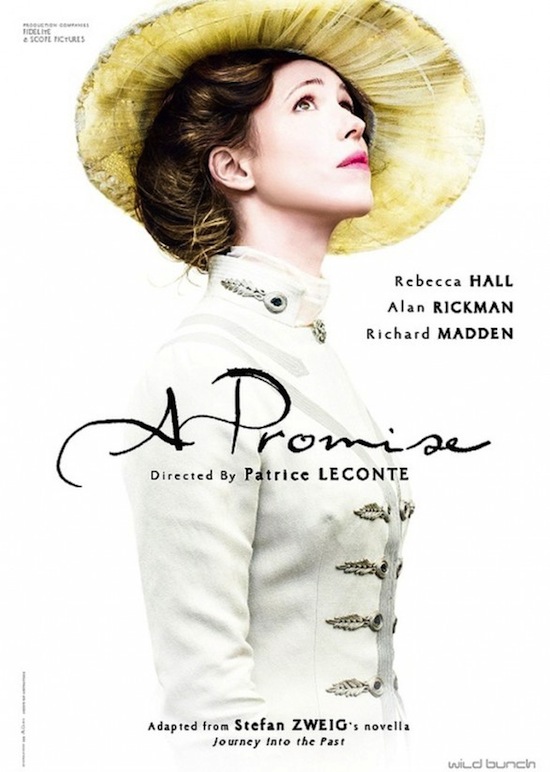 A PROMISE (UNE PROMESSE), by French director and scriptwriter Patrice Leconte, starring Rebecca Hall, Alan Rickman, and Richard Madden, as well as 4 new films in the Out of Competition and Venezia Classici sections, will complete the program of the 70th Venice International Film Festival, taking place 28 August to 7 September 2013.

Finally, the collective film “Venezia 70 – Future Reloaded”, composed of 70short films lasting between 60 and 90 seconds, made by 70 directors from all over the world to celebrate the 70th anniversary of the Festival, will be the second opening film at the inaugural ceremony.

UNE PROMESSE, written (with Jérôme Tonnerre) and directed by Patrice Leconte, will have its world premiere screening at the 70th Venice Film Festival. Based on a novel by Stefan Zweig, the film takes place in Germany, in the period preceding World War I, and hinges on a woman who falls in love with the young assistant to her husband, a rich and powerful industrialist. Earlier films by Patrice Leconte include Monsieur Hire (1989), based on a novel by George Simenon, the well-known Le mari de la coiffeuse (The Hairdresser’s Husband, 1990), starring Jean Rochefort and Anna Galiena, Ridicule (1996), which received an Oscar nomination for Best Foreign Film, L’homme du train (The Man on the Train), which earned public acclaim at the Venice Film Festival in 2002, and Confidences trop intimes (Intimate Strangers, 2004).

Three new documentaries have been added to the programme of the 70th Venice International Film Festival: