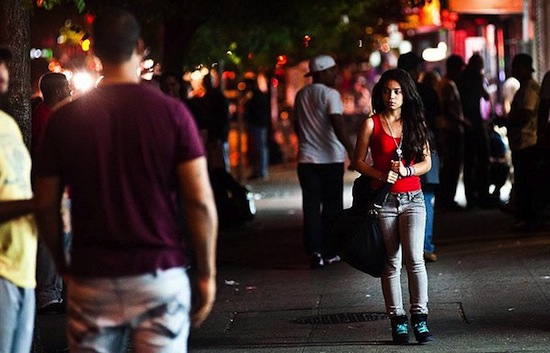 Growing pains may easily be one of the things that mostly all human beings can relate to. I can speak for myself assuredly when I say that life’s lessons come in all shape, sizes, and consequence.  For Lead actress Yainis Ynoa, better known as Lena AKA “Babygirl” it seems like they come all too frequently.  Already dealing with. being a 16-year-old latina in the Bronx which comes with many an obstacle economically, and socially there are expectations of her; her complex homelife is a constant theme throughout the film, documenting a relationship that seems like she is the parent most of the time.  Their bond is undying, of course, but their relation to each other is awkward at times, as you witness the responsibilities of the home and in guiding each other too often fall in the lap of Babygirl.

At times she is a crutch, others a confidant, and at the most important moments she is her mothers conscience. Lena has taken on the burden of holding the fort down as some would say as Lucy struggles with her demons, and promiscuosity.  Falling head over heels for whom she believed would be Mr. Right has quickly turned into another heartache.  When learning that Mr Right, Victor, secretly covets the company of her daughter not her, Lucy loses it in a reaction that almost costs the two (mother and daughter) their relationship

Outside is no relief for the Lena; as an after thought, her closest friends like Daishan are really jealous, instead of suppportive. Judgemental in time when what Lena needs is consolation; her intrigue with a neighborhood sweetheart named Xavier who innocently wants nothing more than to share moments of puppy love, a stark contrast to the creepish desires of Victor.  What was overwhelming at first, becomes a place of comfort for Lena as she quickly learns what trying to grow up too fast can amount to.

From backstab to backlash, tribulation, to exhilaration ( a first kiss, or first alcoholic beverage at a time when she does not even know how to order except from the kids menu ) follow the maturation of Lena AKA Babygirl in this very candid portrayal of what unfortunately is the life of boriqua teenager in the mean streets of Fordham Heights.

SYNOPSIS: Set in the Bronx, BABYGIRL is about Lena (Yainis Ynoa), a fifteen-year old Nuyorican girl, who has watched her heart-broken single-mom (Rosa Arredondo) fall in love with one man after another.  When Victor (Flaco Navaja), the latest boyfriend, starts hitting on Lena, she sets out to expose him.   But the plan backfires, and Lena finds herself trapped in an impossible love-triangle.  The only way out is for her to stand up and confront some bitter home truths. BABYGIRL is the second feature by Irish director, Macdara Valley, who moved to Bronx, New York seven years ago.