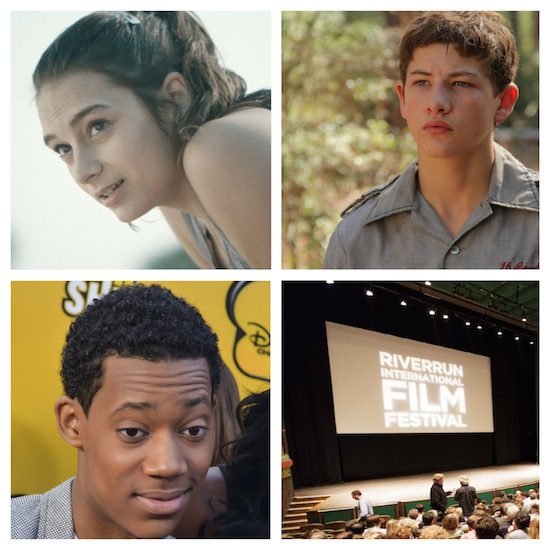 We’re really excited about this year’s Spark Award recipients,” said RiverRun Executive Director Andrew Rodgers. “These three emerging talents have each really impressed us over the past couple years and are well on their way to even bigger roles and greater recognition.”

Sophie Desmarais is a blossoming young Canadian actress and the star of Sarah Prefers to Run, which is screening in this year’s Narrative Features Competition program at RiverRun. Desmarais plays Sarah, an avid runner with a chance to join the track team at a top Quebec university despite her sheltering mother’s refusal of any financial support. Her lovelorn roommate suggests they get married instead to secure a grant and she agrees, only to discover that her true heart lies elsewhere. She recently won Best Actress in a Canadian Film at the Vancouver Film Critics Circle Awards for her role in this film.

At 26 years old, Desmarais is still a relative newcomer, and her first brush with international visibility came with a role in Xavier Dolan’s Heartbeats, which premiered at Cannes in 2010. Desmarais’ other film credits include Head in the Clouds (2004), where she was featured alongside Penelope Cruz and Charlize Theron, and a memorable supporting role in Denis Côté’s Curling, which premiered at the 2010 Locarno Film Festival and was a RiverRun selection in 2011. In 2009 she appeared in the Théâtre du Nouveau-Monde’s production of Shakespeare’s Much Ado About Nothing. Indiewire recently named her one of the 10 actors to watch this year at the Cannes Film Festival.

At just 17 years old, Tye Sheridan is our youngest Spark Award honoree. Before his debut film he had acted in only a handful of school plays before being chosen out of 10,000 boys to play the youngest son of Jessica Chastain and Brad Pitt in the peerless Terrence Malick’s The Tree of Life (2011). RiverRun fans will recognize Sheridan from his role in the 2013 Festival pick Mud, playing the role of Ellis opposite Matthew McConaughey and Reese Witherspoon. Sheridan plays Gary Jones in our 2014 special screening film Joe, alongside Nicolas Cage. For this role he received the Marcello Mastroianni Award for best upcoming young actor at the 70th Venice International Film Festival.

In 2013 he joined the cast of Grass Stains, a new film written and directed by Kyle Wilamowski.His upcoming roles include a spot in Dark Places, alongside Charlize Theron, Chloë Grace Moretz and Nicholas Hoult as well as a part in The Forger, starring John Travolta and based on a script by Richard D’Ovidio.

Tyler James Williams is best known for his starring role on the Emmy Award-winning series Everybody Hates Chris, for which he won the 2007 NAACP Image Award for Best Actor in a Comedy Series. Williams made his return to primetime network television last year co-starring in the NBC comedy Go On alongside Matthew Perry. Last summer, Williams was seen on the big screen in the Tyler Perry comedy Peeples with Kerry Washington and Craig Robinson.  He also starred in the Disney Channel Original Movie Let It Shine as Cyrus DeBarge, a gifted rapper full of self-doubt, and was nominated for an NAACP Image Award for his performance. He began acting at the age of four on Sesame Street and later co-starred in the animated series Little Bill.  Additional television credits include Law & Order: SVU and numerous appearances in sketches on Saturday Night Live. His most recent film, Dear White People, had its world premiere at the Sundance Film Festival in January.  Born in New York, Williams currently resides in Los Angeles with his mom, dad, brothers Tylen and Tyrel, and their silky terrier, Benny “Ruff-Neck” Williams.