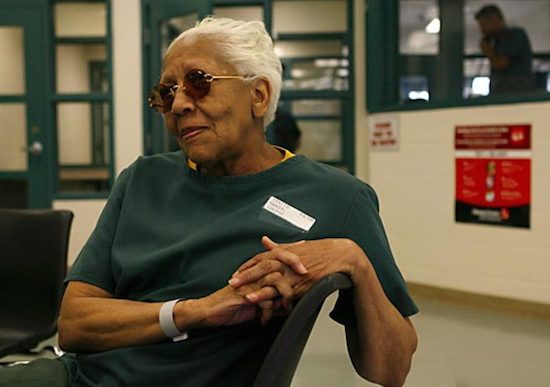 The Life & Crimes of Doris Payne

The Roxbury International Film Festival (RIFF) which ran from Wednesday, June 25 to Sunday June 29 at the Museum of Fine Arts, Boston, announced the jury and audience award winners.

“This year the Roxbury International Film Festival broke new ground with 30 stellar, high quality films and great audience participation for the record number of filmmakers present to discuss their films,” said festival director Lisa Simmons.  “It was so difficult to name the awardees because of the incredible work that was screened over the five days. Congratulations to all the filmmakers!”

The Festival’s top honor The Audience Favorite Award was given to filmmakers Matthew Pond and Kirk Marcolina for their film The Life & Crimes of Doris Payne, a riveting story of an 83 year old African American international jewel thief.

The juried awards are the Narrative Feature and Narrative Short Award, the Documentary Feature and Documentary Short Award, and The Henry Hampton Award for Documentary Filmmaking.  The award is based on the award winning filmmaker Henry Hampton who created the Eyes on the Prize series among many others before his untimely death in 1998, and The Kay Bourne Emerging Filmmaker Award for a local filmmaker who has shown great promise in the film presented.

The Narrative Feature Award recognizes the top narrative film in competition at the Festival and went to Darius Britt for his film Unsound, which made its New England premiere at the Festival and screened at the American Black Film Festival prior to screening at RIFF.   Narrative Short Award was bestowed upon Moon Molsen for his film The Bravest, The Boldest which screened at the Sundance Film Festival in 2014.

The Documentary Feature Award recognizes the top documentary film in competition at the Festival and went to Raouf J. Jacob and Lara Moreno for A Culture of Silence.  An honorable mention was also bestowed upon Chris Wilson and Stephen Witte for their film, You Have His Eyes, which also made its world premiere at the Festival.

The Documentary Short Award recognizes the film that like the feature informs audiences of an unknown and compelling story. This award went to Coy Poiter for Cowboys of Color:  A Multi-Cultural Legacy, which made its world premiere at the festival.  An honorable mention was bestowed upon Gabriela Lozada Pozo for La Marea, a touching story about love and life on a small island.

The Henry Hampton Award for Documentary Filmmaking was given to Noube Rateau for his film The Culture.  The award is named after the award winning filmmaker Henry Hampton who produced such films as Eyes on The Prize and I’ll Make Me A World.

The Kay Bourne Emerging Filmmaker Award was given to Sam Powell and Peter Neudel for their film Good Fences, (also a world premiere at RIFF).  The award is named on behalf of Kay Bourne, a beloved writer who has been covering arts and entertainment in Boston for over 45 years.

Just completing its 16th year, the Roxbury International Film Festival showcases films that incite action, educate, and share distinct and diverse images of people of color from across the world. Touted as a filmmaker’s festival, the festival prides itself on providing the best filmmaker experience with state of the art screening venues and a deeply dedicated audience base.