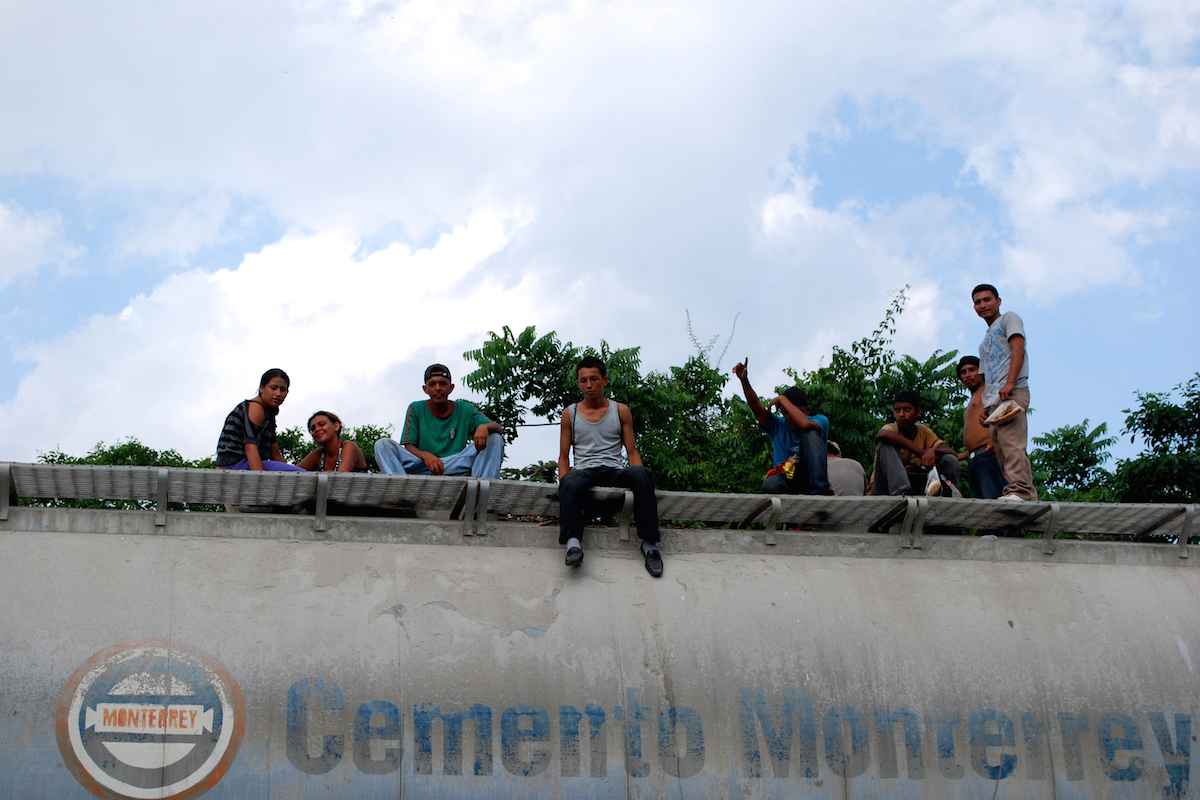 Each film will become available to stream online starting the day of its final Festival screening, through May 31. For more information and to browse the lineup, visit the SFIFF Online Screening Room at watch.sffs.org.

“We are grateful to our partner FORA.tv for providing a great reward for the loyal members of the Film Society, with this second chance to see some of the world’s finest films,” said Noah Cowan, Executive Director of the San Francisco Film Society. “This pilot program will let us measure interest in the Bay Area for a highly curated, short-window online look at a range of global cinema. Many of these films will not be returning to play in theaters, nor will they be readily available on traditional streaming services, so the opportunity really is something special.”

All of Me – directed by Arturo González Villaseñor (pictured above)
Since 1995, the Patronas, a group of women in southern Mexico, prepare food and drinking water in large quantities to hand out as the train known as “The Beast” speeds by carrying men and boys from Central America to the US border. This deeply moving documentary allows the women to tell their stories, reluctantly at first, then eloquently and with enormous heart. (Mexico 2014, 90 min)

Beats of the Antonov – directed by Hajooj Kuka
Filmed in the civil war-ravaged region between South and North Sudan, Beats of the Antonov paints an inspiring portrait of the Blue Nile and Nuba Mountain refugee communities and their reliance on music-making not only as a healing force in the face of devastating loss and displacement, but also as a vital instrument to keep their cultural heritage alive.

Bota – directed by Iris Elezi and Thomas Logoreci
Populated by charming oddballs, quirky café/bar Bota (literally “the world” in Albanian) is a silent witness to the lives and secrets of people living in the shadow of the past. Long after the end of Albania’s harsh dictatorship, the locals’ lives have stagnated, most too poor to seize the opportunities liberty has offered them. But progress, in the form of a highway construction project, prompts change and new decisions for this very special café society. (Albania/Italy/Kosovo 2014, 104 min)

El Cordero – directed by Juan Francisco Olea
Domingo is a devoted family man and Christian missionary gliding through a dutifully modest if unexceptional life. He’d happily keep it that way, too, but for the fact that a fatal accident leaves him, disturbingly, without a sense of guilt. Shot through with a subtle, sardonic humor and beautifully acted, this exceptional feature debut is an engrossing dramatic thriller reverberating with deeper questions about our innermost natures and our ties to one another. (Chile 2014, 90 min)

Fidelio: Alice’s Odyssey – directed by Lucie Borleteau
Working in the macho world of sailors, ship engineer Alice is an expert in her field and fully in command of her sexuality as well. When she comes up against the classic double standard after an affair with the ship’s captain, she risks the taunts of her peers and reprimands of her superiors. First-time director Borleteau offers a compellingly acted portrait of a woman who dares to subvert conservative notions of female behavior in a male-oriented workplace. (France 2014, 95 min)

Murder in Pacot – directed by Raoul Peck
Grappling with the aftermath of Haiti’s devastating 2010 earthquake, a formerly well-to-do husband and wife rent their crumbling house in a tony Port-au-Prince neighborhood to a European aid worker. When his brash young Haitian girlfriend shows up, an emotionally fraught game of sexual intrigue and class warfare ensues in this tense and provocative film from acclaimed director Raoul Peck. (Haiti/France/Norway 2014, 130)

NN – directed by Héctor Gálvez
A team of forensic investigators in the Peruvian countryside digs up the remains of persons who were murdered during the brutal Fujimori Era of the 1980s and ’90s. The process of identifying one particular set of bones becomes an agonizing experience for the woman who claims they belong to her husband and for the investigator who has to go by the facts. Suffering, injustice and peace of mind are pitted against scientific truths with no easy answers in this engrossing, expertly paced drama. (Peru/Colombia/Germany/France 2014, 95 min)

Of Men and War – directed by Laurent Bécue-Renard
Winner of the 2014 IDFA award for Best Feature Documentary, Of Men and War is director Laurent Bécue-Renard’s multiyear account of the residents of The Pathway Home, an innovative treatment center for PTSD and related war traumas in Yountville, California. This quietly intense film bears witness to Iraq and Afghanistan veterans as they revisit the brutalities of combat, process the traumatic memories that haunt them and search for meaning in the psychological wreckage of war. (France/Switzerland 2014, 142 min)

Red Amnesia – directed by Wang Xiaoshuai
Deng, a retired widow, tries to care for her family, though her sons protest her “intrusions” into their personal lives. When mysterious phone calls and other strange occurrences disrupt her daily routine, she wonders, who-if anyone-might be coming after her. In this unsettling thriller set in contemporary China, Wang Xiaoshuai explores the political and personal consequences of memory, and traces the blurred lines between those who remember their past, and those who choose to forget. (China 2014, 110 min)

T-Rex – directed by Drea Cooper and Zackary Canepari
In the new Olympic sport of women’s boxing, 17-year-old Claressa Shields bursts out from the total obscurity of a small Flint, Michigan, gym to compete for a coveted gold medal. T-Rex beautifully captures her rapid ascent, her battle to overcome a damaged home life, the culturally ingrained bias against women’s boxing, the spellbinding thrill of her bouts and the indomitable willpower that shows, in its purest and most powerful sense, the meaning of warrior spirit. (USA 2015, 87 min)

Two Shots Fired – directed by Martín Rejtman
Argentine filmmaker and short story writer Martín Rejtman’s first feature in 10 years is a slyly funny low-key existential comedy for fans of films like Stranger than Paradise and Slacker. As the film’s ever-evolving story follows an intersecting group of teenage and adult characters, it upends narrative expectations about the significance of individual events and offers instead careful, amused observation of how we all get through life, one thing after the other. (Argentina/Chile/Germany/Netherlands 2014, 104 min)

Western – directed by Bill Ross IV and Turner Ross
This intimate, observational documentary portrait of the US-Mexico border focuses on two Eagle Pass, TX, residents-cattleman Martin Wall and Mayor Chad Foster-and follows the strains in the border town’s relationship to its sister city, Piedras Negras, Mexico. As drug cartel violence moves into the region and threatens to spin out of control, US Federal policies made a thousand miles away shut down commerce and further test an already delicate balance. (USA 2015, 93 min)

Art – directed by Adrian Sitaru
A 19-year-old girl auditions for a sexy film role while the director tries to convince her mother of the artistic rationale behind the provocative part. A wry look at the machinations of filmmakers from the director of Hooked (SFIFF 2009). (Romania 2014, 19 min)

Bang Bang! – directed by Julien Bisaro
An auto accident leads to a chance encounter in the woods in this moody suspense tale. (France 2014, 12 min)

* Big Head – directed by Jairo Boisier
The bond between humans and their pets is often difficult to express with words. In this charming documentary, a Chilean artist finds his own way to immortalize his beloved mastiff Domingo. (Chile 2014, 25 min)

* The Box – directed by Michael I Schiller
Created as part of a journalistic story by the Center for Investigative Reporting, this story centers on juvenile imprisonment in New York’s Rikers Island jail. (USA 2014, 6 min)

* Hotel 22 – directed by Elizabeth Lo
Hop onboard a unique Bay Area bus route that becomes an unofficial shelter for the homeless. (USA 2014, 8 min)

No ID – directed by Emnet Mulugeta
A lonely stretch of desert road becomes the scene of a dance battle where an unexpected occurrence yields surprising results. (Sweden 2014, 3 min)

* Rain – directed by Johannes Stjärne Nilsson
Stormy weather literally follows a young woman through her day in this whimsical new work from the Sound of Noise (SFIFF 2011) co-director. (Sweden 2014, 9 min)

Sormeh – directed by Azadeh Ghochagh
During the 1979 Iranian revolution, a woman getting ready for a marriage ceremony has to make a quick decision when confronted by a rebel hiding in her building. (Iran 2014, 10 min)

image: Photo credit: Courtesy of San Francisco Film Society.
Description: A scene from Arturo Gonzalez Villasenor’s All of Me, playing at the 58th San Francisco International Film Festival, April 23 – May 7 2015