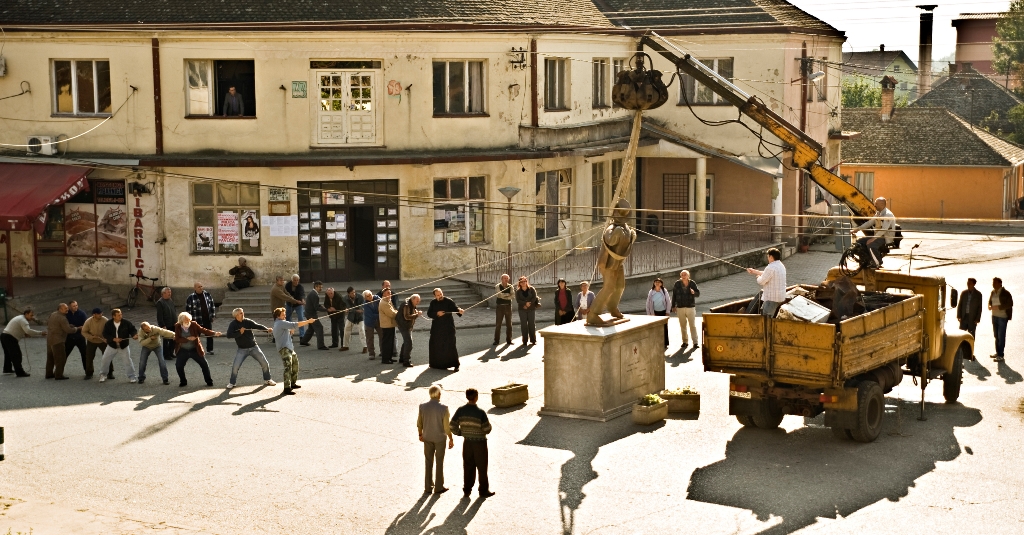 The Nashville Film Festival (NaFF) 2015 announced the 46th Annual Competition Award winners, including Grand Jury Prizes to Monument to Michael Jackson (pictured above), Orion: The Man Who Would Be King and other notable films. Best Original Song went to Brian Wilson for “One Kind of Love” fromLove & Mercy.

According to the jury, its palpable portrayal of a child torn between two worlds earned Daytimer the Live Action Short Grand Jury Prize. Bear Storyset itself a very high bar both stylistically and narratively and delivered across the board, which garnered it the Grand Jury Prize for Animated Short. La Vie en rose comme dans les films provided a humble glimpse into the complicated world of memory; the short received the Grand Jury Prize for Documentary Short. Each of these three shorts will be automatically qualified for Academy Award® consideration.

The Bridgestone Narrative Competition Grand Jury Prize went to Monument to Michael Jackson. The film was, “at times a political farce, a relationship drama and an inspiring tale of tenacity in the face of adversity.”The jury also awarded Geraldine Chaplin from Sand Dollars the Best Actress award, while Boris Milivojevic from Monument to Michael Jackson received the Best Actor award. Best Screenplay went to Shonali Bose for Margarita, with a Straw, and the Film Musicians Secondary Market Fund Award for Best Music in a Feature Film went to Ramon Cordero, Benjamin De Menil and Edilio Paredes for Sand Dollars. The Special Jury Prize for Cinematography was awarded to Tony Mirza for Eadweard.

The jury said Orion, “hits every note… and then some. It was a completely unpredictable yet always entertaining and moving documentary.”The jury awarded the Special Jury Prize for Best Import to Tomi Fujiyama in Made in Japan.

“Frame by Frame is a fascinating look into life in Afghanistan that celebrates its growing photography culture, with unprecedented access and interviews,” the jury said. “The film is beautifully crafted and we’re so honored to present these first time filmmakers with the Documentary Grand Jury Prize, and hope that they will continue to make inspiring films.”The Special Jury Prize for Direction went to Jimmy Chin and E. Chai Vasahelyi forMeru.

Songs She Wrote About People She Knows received the Grand Jury Prize, “for its quirky plot, high production values, and unique yet relatable characters, the New Directors Jury awarded its Grand Jury Prize to Songs She Wrote About People She Knows. Lead actress Arabella Bushnell delivers a particularly strong performance as an aspiring pop singer, complete with highly original and hilarious songs. Writer/director Kris Elgstrand is a strong new voice in independent cinema and we are excited to see what he comes up with next. “

The jury awarded Krisha Fairchild with Best Actress for Krisha and Daniel Cerqueira with Best Actor for Radiator. The Special Jury Prize for Direction went to Sarah Adina Smith for The Midnight Swim.

“The jury found itself unable to determine a hierarchy between exquisite works of passion, madness, human bonds and inhuman horror.”The jury awarded for Best Actress to Amy Everson in Felt and Best Actor to MacLeod Andrews in They Look Like People. The Special Jury Prize for Outstanding Use of Music went to Rain the Color of Blue with a Little Red in It.
Ground Zero Tennessee First Competition
Grand Jury Prize – The Keepers, directed by Joann Self Selvidge and Sara Kaye Larson

Frame by Frame Monument to Michael Jackson Naz & Maalik Orion: The Man Who Would Be King Songs She Wrote About People She Knows Sweet Micky For President The Keepers (2015) Welcome To Leith WILDLIKE