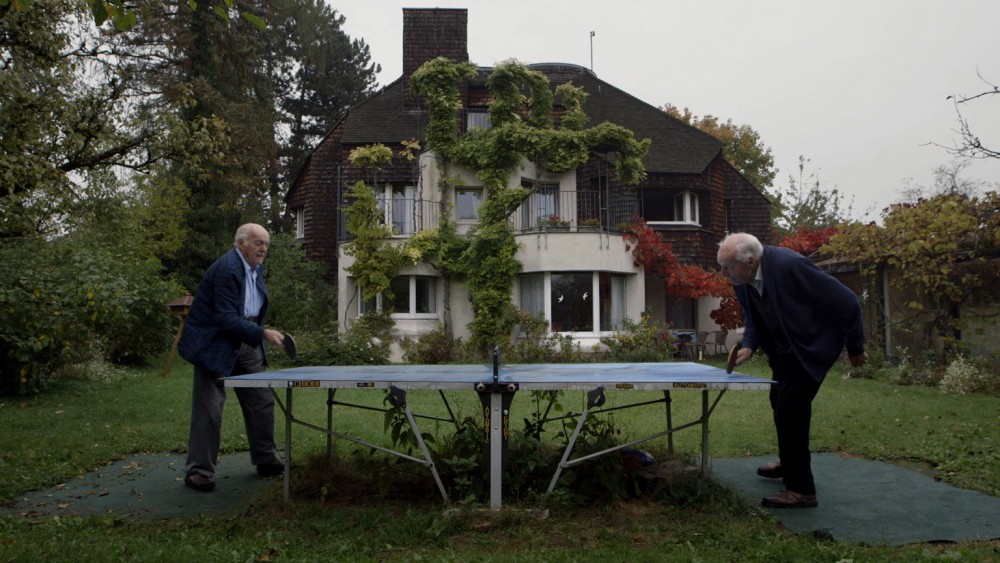 In addition to the program of shorts, Chicago Film Archives program and feature-length films (all listed below), the Spotlight features a discussion with architect Helmut Jahn on Sat, Oct 17 at 6:00pm at the AMC River East 21.

Rounding out the Spotlight: Architecture+Space+Design program, on Wednesdays throughout the Chicago Architecture Biennial (Oct-Dec 2015), local and visiting architects and designers will present Architects on Film.

Concrete Love – The Bohm Family (pictured above)
CHICAGO PREMIERE
Country: Germany, Switzerland
Director: Maurizius Staerkle Drux
Synopsis: Prominent German architect Gottfried Böhm is celebrated for his buildings of concrete, steel, and glass. His three sons are also highly acclaimed. When the family matriarch, an architect herself and source of inspiration for all Böhm men, dies, their emotional foundation is shattered. Sensitive to form and emotion, Concrete Love lays bare the blueprint of a family.

Double Happiness
CHICAGO PREMIERE
Country: Austria, China
Director: Ella Raidel
Synopsis: This surreal, exquisitely framed documentary looks at the construction of a near-exact replica of a scenic Austrian town-cobblestone by cobblestone-in an undeveloped Chinese tract of land. In a style both entrancing and playful, the film questions the difference between real and imagined, model and reality, raising thought-provoking questions about the nature of authenticity and happiness. Features insightful interviews with urban planners, designers, and trailblazing Beijing architect Ma Yansong.

Greater Things
USA PREMIERE
Country: UK, Japan
Director: Vahid Hakimzadeh
Synopsis: In this stunningly composed meditation on space and human relationships, an adrift Iranian architect, a disengaged Japanese couple, and a Lithuanian mixed martial arts fighter search for connection in modern Japan. From the stylishly designed shops of Tokyo to a minimalist glass suburban home to a mysterious tree house in the woods, Greater Things reveals the strange places we inhabit, and how they can both unite and divide us.

Helmut Jahn: An Architect’s Life
Country: N/A
Director: N/A
Synopsis: World-renowned for his progressive architecture and constant innovation, Helmut Jahn has designed 16 buildings in Illinois, including Chicago’s own United Airlines Terminal. He has also designed skyscrapers in major cities around the world, from Brussels and Rotterdam to Bangkok, Shanghai, and Berlin, which boasts his celebrated Sony Center. Jahn will discuss his remarkable 49-year career in architecture and his unique vision, using clips from modern and classic films that showcase his designs and reflect his philosophy.

Illegal Portraits (Ritratti Abusivi)
NORTH AMERICAN PREMIERE
Country: Italy
Director: Romano Montesarchio
Synopsis: Welcome to Parco Saraceno, a derelict neighborhood in southeast Italy. Built in the 1960s, its run-down houses once held the promise of suburban coastal bliss. Now home to a community of squatters, the development is a portrait of both poverty and resilience. Without power or resources, the residents persevere, finding new ways to live among the ruins and maintain their way of life-and their dignity.

The Infinite Happiness
CHICAGO PREMIERE
Country: France, Denmark
Director: Ila Beka, Louise Lemoine
Synopsis: Copenhagen’s “8 House,” an ultramodern loop of apartments created by architect Bjarke Ingels, reinvents the concept of “home.” Its 500 residents can traverse all nine floors by bike while their kids attend kindergarten on the ground floor. This exuberant documentary profiles the (mostly) happy residents, including a group of children who experience the best scavenger hunt ever, offering a hopeful, inspired picture of communal living by design.

Invention
USA PREMIERE
Country: Canada, France
Director: Mark Lewis
Synopsis: A meditative sensory experience from Canadian avant-garde artist Mark Lewis, Invention intimately explores our relationship to the physical space around us. Long, luxurious tracking shots take the viewer through museum works and modern cityscapes in Toronto, São Paolo, and Paris, panning and tilting at improbable angles to give a fresh perspective on the everyday. Echoes of Koyaanisqatsi and Man With a Movie Camera infuse this poem of modern life.

Milano 2015
NORTH AMERICAN PREMIERE
Country: Italy
Director: various
Synopsis: From subways to skyscrapers, from antique monasteries to ornate mansions, from shuttered old theaters to the inimitable La Scala, this stunning omnibus feature captures the soul and majesty of the northern Italian city. Six Italian directors explore different facets of contemporary Milan. The result is a rich and eclectic portrait of urban life and spaces-both rooted in history and bursting with a diversity of architecture and humanity.

Modern Metropolis: Mid-Century Chicago On Film
Note: This is a FREE event at the Chicago Cultural Center
Country: N/A
Director: various directors
Synopsis: Chicago’s rich architectural tradition has long been a hallmark of the Windy City. In this evocative collection of shorts culled from the Chicago Film Archives dating from 1962 to 1976, go back in time to witness its urban glories. The films include dynamic “city-symphonies,” an ode to stainless steel, and an admiring portrait of Louis Sullivan’s Stock Exchange building and its woeful demolition.

Obra
CHICAGO PREMIERE
Country: Brazil
Director: Gregorio Graziosi
Synopsis: When a complacent young architect in São Paulo discovers a burial ground at the site of his first construction project, he must reckon with hidden secrets that make him question the very foundation of his heritage. An entrancing meditation on urban alienation and repressed national memory filmed in stark, exquisitely composed black-and-white, Obra is a haunting portrait of contemporary Brazil in flux.

Under Electric Clouds (Pod elektricheskimi oblakami)
USA PREMIERE
Country: Russia, Ukraine
Director: Aleksey German Jr.
Synopsis: In 2017 Russia, exactly 100 years after the Bolshevik Revolution, the world is on the verge of a new great war. An unfinished skyscraper looms on the horizon, casting an emblematic shadow over a society about to collapse. With breathtaking sci-fi imagery, this wildly strange magical realistic film interweaves the stories of seven individuals, from an architect to a Kyrgyz laborer, as it explores a dystopian dreamscape.

Underground Fragrance (Di Xia Xiang)
USA PREMIERE
Country: China, France
Director: Di Xia Xiang
Synopsis: On the rapidly urbanizing outskirts of Beijing, Yong Le spends his days scouring homes scheduled for demolition for furniture to pawn and his nights in the sub-basement of a high-rise apartment building. After an accident blinds him, a nightclub dancer, hoping to secure a day job with a real estate developer, nurses him back to health. Produced by Tsai Ming-Liang, the film adapts his signature meditative social realism, revealing a world in which everyone, literally and figuratively, is looking to move up.

Why a Film About Michele De Lucchi? (Perché un film su Michele De Lucchi)
CHICAGO PREMIERE
Country: Italy
Director: Alessio Bozzer
Synopsis: A portrait of the famous radical Italian designer and progenitor of the Maker Movement, this informative, playful documentary traces Michele De Lucchi’s personal experiments and provocations. With De Lucchi serving as his own narrator, the film examines his pioneering achievements with the design movement Memphis, including the stripped-down “First Chair,” the Oceanic Lamp, and a spectacular LED-lit bridge in Tbilisi, Georgia.

The Hawks and the Sparrows
Country: Italy (1966)
Director: Pier Paolo Pasolini
Featured Architect: Xavier Wrona, founder of the architecture office Est-ce ainsi, a structure working to refocus the architectural practice on its political consequences and its possible participation in the reform of “vivre ensemble.”
Synopsis: In this whimsical fable from the legendary Italian director, an old man (played by the famous Keaton-esque clown Toto) walks along the dusty road of life with his empty-headed son. Joined by a philosophical crow, who asks probing questions about existence, father and son witness the complex contradictions of Italian life, from Christianity vs. Marxism, Church vs. State.

Hearts of Darkness: A Filmmaker’s Apocalypse
Country: USA (1991)
Directors: Fax Bahr, George Hickenlooper
Featured Architect: Eric Ellingsen is currently teaching at the School of the Art Institute (SAIC) and has a practice called species of space.
Synopsis: This eye-opening documentary examines the outrageous behind-the-scenes making of Francis Ford Coppola’s 1979 classic Apocalypse Now. With rarely seen archival footage shot by Coppola’s wife, the film recounts how events on the Philippines-set production soon resembled the madness recounted in the story. Over-budget, with cast and crew bordering on the edge of insanity, the film is a revealing look at the extraordinary lengths that some will go to make their art.

Waste Land
Country: USA (2010)
Director: Lucy Walker
Featured Architect: Emmanuel Pratt, Co-Founder and Executive Director of the Sweet Water Foundation and founding member of axilL3C. He is also Director of Aquaponics for Chicago State University and teaches courses within the College of Arts and Sciences.
Synopsis: This Oscar-nominated documentary follows renowned artist Vik Muniz as he journeys from his home base in Brooklyn to the world’s largest garbage dump in his native Brazil. There, he photographs an eclectic band of “catadores”-people who scrounge for recyclable materials. As he collaborates with these inspiring characters to recreate photographs of themselves, Waste Land offers stirring evidence of the transformative power of art and the alchemy of the human spirit.
Screening 1: Wed, Nov 18; 6:00pm
Note: This is a FREE event held at the Chicago Cultural Center

My Winnipeg
Country: USA (2007)
Director: Guy Madden
Featured Architect: Design With Company’s co-founders Stewart Hicks and Allison Newmeyer, who are also assistant professors at the University of Illinois at Chicago
Synopsis: A self-described “docu-fantasia,” this rollicking cinematic poem charts the not-exactly-true goings-on in the birthplace of Canadian filmmaker Guy Maddin (The Saddest Music in the World). Brazenly blurring the borders of nonfiction and dream, Maddin recounts his return to his childhood home, revisiting key moments from his adolescence and his city’s history (from a semi-nude civic pride event to a jazz-age séance ballet!) My Winnipeg is a wild ride of remembrance, place, and imagination.
Screening 1: Wed, Nov 4; 6:00pm
Note: This is a FREE event held at the Chicago Cultural Center

The Wiz
Country: USA (1978)
Director: Sidney Lumet
Featured Architect: Amanda Williams whose work centers on color, race, and space. She uses vivid, culturally derived colors to paint abandoned houses on Chicago’s South Side, marking the pervasiveness of undervalued Black space. Accolades include a 3Arts Award, a Joyce Foundation scholarship, and a Robert James Eidlitz Fellowship in Ethiopia.
Synopsis: The film version of the popular Broadway musical retells the events of “The Wonderful Wizard of Oz” through the eyes of Dorothy, a young African-American kindergarten teacher (Diana Ross) who’s “never been below 125th Street.” On her journey down the yellow brick road of ’70s Manhattan, she encounters a garbage-stuffed scarecrow (Michael Jackson), a broken-down tin man (Nipsey Russell), and a cowardly lion (Ted Ross) posing as a stone statue outside a museum. Together, they seek out the Wiz (Richard Pryor), a powerful wizard living in Emerald City who may be able to help Dorothy get home.
Screening 1: Wed, Dec 9; 6:00pm
Note: This is a FREE event held at the Chicago Cultural Center; featuring a conversation with Jacqueline Stewart, Professor in the University of Chicago’s Department of Cinema and Media Studies. Stewart’s research and teaching explore African American film cultures from the origins of the medium to the present, as well as the archiving and preservation of moving images, and “orphan” media histories, including nontheatrical, amateur, and activist film and video. She directs the South Side Home Movie Project and is co-curator of the L.A. Rebellion Preservation Project at the UCLA Film and Television Archive. She also serves as an appointee to the National Film Preservation Board. She is currently researching the racial politics of moving image preservation and is also completing a study of the life and work of African American actor/writer/director Spencer Williams.

Voices of Cabrini
Country: USA (1999)
Director: Ronit Bezalel
Featured Architect: Andres Hernandez, an artist-designer-educator who works with youth and adults to interpret, critique, and re-imagine the physical, social and cultural environments we inhabit.
Synopsis: Shot over a four-year period, this gripping documentary chronicles the demolition of Cabrini Green, Chicago’s most infamous housing development. Told sympathetically from the perspectives of the people being uprooted, the film shows the startling evictions of longtime residents from the city’s mid-city ghetto. A sobering look at “city planning” at work, Voices of Cabrini is a valuable historical look at a city in transition-and those left behind.