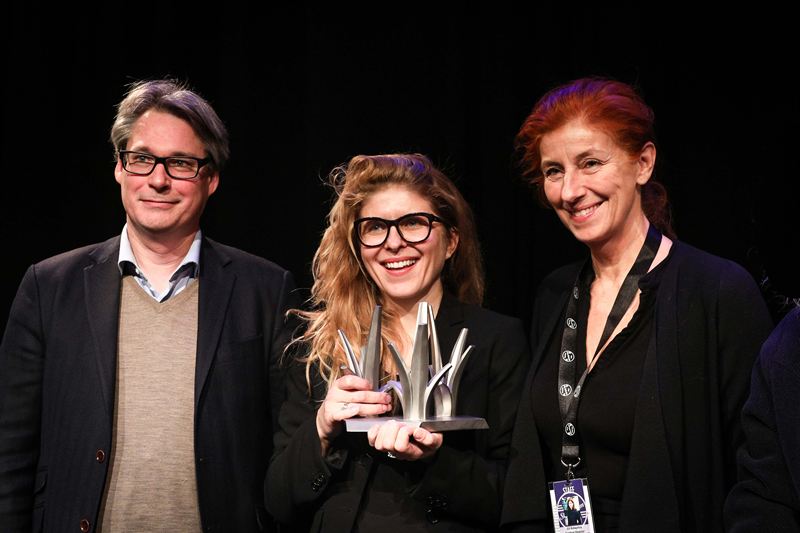 One of the world’s biggest cash prizes for film – the Stockholm Impact Award at Stockholm Film Festival went to Anna Jadowska for her film Wild Roses.  Jadowska won the prize worth one million SEK and the award designed by the Chinese artist Ai Weiwei.

Ana Jadowska won “For the sensitive depiction of a mother who refuses to abandon her true self, for the portrait of a revolting child that questions an utterly conservative society, for the visually exquisite style that contrasts with a world plunged in prejudice and moral coercion, the Stockholm Impact Award goes to Anna Jadowska for Wild Roses, a metaphor for human resilience.”

“Thank you so much for this award, I’m very honored. A special thanks to the Stockholm International Film Festival, the festival director, organizers, the city, of Stockholm and members of the jury. I had a long and difficult journey with this movie and to receive this award means a lot to me since it will give me the opportunity to do another film” says winning director Anna Jadowska.

Director Anna Jadowska presents a powerful story about a woman facing the difficulties of following her own desires in a small, conservative and gossip-filled village. With striking forest imagery that beautifully captures light drizzling through branches, the film is an exceptional portrayal of a woman and her environment. While examining the plights of women in a conservative society, however, Wild Roses is also a touching depiction of the relationship between mother and daughter.

The other nominated movies and directors were:

The Last Verse by Ying-Ting Tseng

My Pure Land by Sarman Masud

The section Stockholm Impact Award is a collaboration between the Stockholm International Film Festival and the City of Stockholm with the purpose to highlight the possibility of film to create change and debate through the depiction of contemporary subjects. The prize amount of one million SEK will help the winner in the development of new film projects.

2015 the director Leena Yadav (India) won the award for Parched.