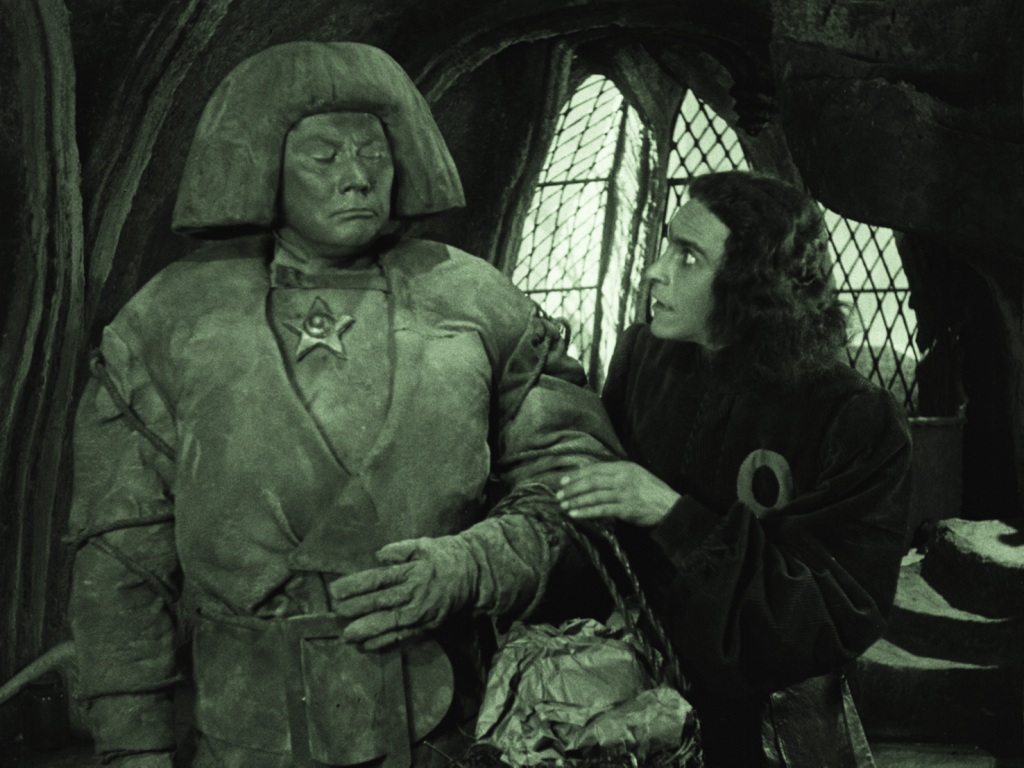 The silent film classic The Golem – How He Came Into The World (Der Golem – Wie er in die Welt kam, 1920), written and directed by Paul Wegener, is the film chosen for the Pre-opening event of the 75th Venice International Film Festival of the Biennale di Venezia, to be shown in the Sala Darsena (Palazzo del Cinema) on the Lido on Tuesday August 28th.

The Golem – How He Came Into The World will be screened from a new digital copy made from the original negative that was thought to have been lost, restored in 4K and supervised by the Friedrich-Wilhelm-Murnau-Stiftung in Wiesbaden (Germany) and by the Cinémathèque Royale de Belgique (Cinematek) in Brussels, to be shown in its world premiere screening. The digital restoration was done by Immagine ritrovata in Bologna.

The 75th Venice International Film Festival will be held on the Lido from August 29th to September 8th 2018, directed by Alberto Barbera and organized by La Biennale chaired by Paolo Baratta.

The Golem – How He Came Into The World by Paul Wegener

Set in ancient Prague of the 16th century Der Golem – Wie er in die Welt kam (1920) recounts the Jewish tale of the clay-made creature brought to life by a rabbi’s occult ritual. Foreseeing the upcoming expulsion of the Jews from the city, Rabbi Löw (Albert Steinrück) creates and awakes the mythical Golem in order to protect his people.

Through a turn of events the Golem saves the emperor’s (Otto Gebühr) life, convincing him to lift the ban. But due to a jealous servant (Ernst Deutsch) and his selfish plans the Golem runs out of control and turns against his creator…

Director Paul Wegener, who also performs the Golem, already adapted the story twice before, once in 1914 and again in 1917. But only his third attempt, driven by great artistic ambition, earned him broader appreciation. Its outstanding mise-en-scène with architecture by Hans Poelzig and cinematography by Karl Freund made Der Golem – Wie er in die Welt kam one of the most recognized and widely-cited films of Weimar Cinema.

The film turned out to be a great international success for the German silent film industry with sold out screenings for months – even in the US and China. Its emblematic expressionist style influenced Hollywood’s classical horror movies as well as popular culture up to this day.

No German version has survived of the silent classic Der Golem – Wie er in die Welt kam. A photochemical restoration from the 1990s bases on export versions.

The discovery of an original negative at the Cinematek (Royal Film Archive of Belgium) gave cause for a new digital 4K restoration of the lost German version by the Friedrich-Wilhelm-Murnau-Stiftung and the Cinematek (Royal Film Archive of Belgium). This negative is edited of different takes than the export version. The takes for two negatives were filmed with two cameras in parallel. The Cinematek`s negative is superior with respect to camera angle and montage.

A duplicate negative from the US release version at the George Eastman House proofs that at some point this negative was used for the US market. It is likely that it was originally the negative for German release. As a result of cuts for the US release, several shots were abridged.

Today the original negative lacks few scenes. Some of them have survived in the material of the George Eastman House. Another source for completion will be a black-and-white print of the Cinémathèque française made from the export negative.

The original negative contains many intertitles in the original Expressionist font that had not been accessible for the previous restoration. Together with the titles that the Filmmuseum München obtained from the Gosfilmofond of Russia, the new restoration will present almost all titles in the famous original font.

Digital restoration of the image includes removal of excessive white dirt, defects of the negative that were created by wear and tear, and adjustment of the completing sources as close as possible to the original negative. The digitale restoration is carried out by L`Immagine Ritrovata.

Reference for colours and grading is the only known vintage print of this film, an Italian release version from the Fondazione Cineteca Italiana to restore the original gray scale and typical colour effect of the original tinting.

With regard to the original music which will accompany The Golem – How He Came Into The World on the evening of August 28th, maestro Admir Shkurtaj has written:

“Scoring Wegener’s film engaged the composer, for the many latent or hidden metaphors that he feels driven to identify and to develop in his own language. And so just as the wise man-wizard Löw uses his own hands to shape out of clay the instrument destined to save the community he feels responsible for, the ensemble of instruments selected for this work was asked to make, by hand, the instruments that would be needed to perform it.

The Cupafon used by the percussionist is an original instrument arising from his own research into the stick friction idiophone, an instrument popular in the regions of Puglia and Basilicata; moreover, playing it requires constantly dipping the hands in water, exactly like you would to shape clay. The midi trumpet is also the result of a handcrafting process, even if to make it requires applying electronic circuits onto the instrument. Here the role of water in shaping the sound as the musician plays the Cupafon is again an artisanal process of the electronics. And so on for the rest of the musicians who were asked to make constant reference to the modus operandi of the maker who does not intend to passively follow academic and canonical performing methods.

The entire work is based on a non-homogeneous musical vocabulary, which reflects the fleeting nature of form which is inherent to clay; a blend in which one can recognize elements of jazz, of contemporary music, of melodic and rhythmic modules typical of the Eastern European musical tradition and of electronic music.

Geometry and the material impression of the buildings in which the scenes are set are mirrored by the concrete sounds recorded in the real environment and played through the synthesizer. The use of electronics, which initially appear unsuited to the scoring of a 1920s silent film, is justified by analogy with the unpredictable nature of the fate of every human creation: once technique has left the hands of its maker, it is destined to live a life of its own. Just as the Golem intends to do.

Along with the score and as a complement to it, the performers must follow the photograms of the film to underscore, as if they were additional dynamic markings, its emotional developments.

Another analogy that more specifically involves the composer of contemporary music in this scoring effort, is his spasmodic search, just like Rabbi Löw, to give life to an inanimate material which for one is the clay, for the other the sounds. Both must also make an effort to avoid incurring the disapproval of the social context for which, all things told, they both work. The Golem is taunted and feared when he is presented to the public, just like a sound production that seeks to break through established conventions and canons. If the rabbi had used his clay to make vases or pots he would undoubtedly have earned more immediate approval, but he would not have convinced the emperor to save his people. His attempt to overstep the boundaries and to attempt the impossible, is identical in nature to the attempt that a manipulator of sound materials makes in his own field when he tries new combinations and new alchemies in the language of sounds”.

Admir Shkurtaj (Tirana, 3 December 1969) began his musical studies in 1984-88 at the arts and music high school “Jordan Misja” in Tirana, in Accordion playing. In 1989 he began his studies in composition at the Conservatory, and pursued them in Italy in 1991 at the Conservatorio statale “Tito Schipa” in Lecce, from which he graduated in 1999. He continued his studies with Sandro Gorli (1994 -1996) and then with Alessandro Solbiati (1999-2002), in courses that would be important for his training as a composer. He earned a diploma in Electronic Music in 2009 and works as a composer, instrumentalist and improviser. He writes music for chamber and full orchestras, theatre and film.