NAME OF FILM: WALKING ON WATER

SYNOPSIS: After the passing of his wife and collaborator Jean-Claude, inimitable environmental artist Christo (he of The Gates in Central Park) finally commences work on a long-gestating project that will invite visitors to Italy’s picturesque Lake Iseo to experience the sensation of walking on water. An epic undertaking that involves building floating walkways spanning over 1.9 miles, the process of bringing this magnificent vision to life is chronicled in director Andrey Paounov’s documentary that delightfully reveals an irascible genius at work—tantrums and all. Taking you behind the scenes of this daunting feat of logistics and planning, you’ll enjoy a taste of what it was like to see this impermanent artwork in person—to not only behold the surreal and transfixing beauty of this remarkable achievement, but to also feel a bit of the joy. And it is the joy that will most stay with you—the joy of creation, of artistic expression, and of a dream realized. 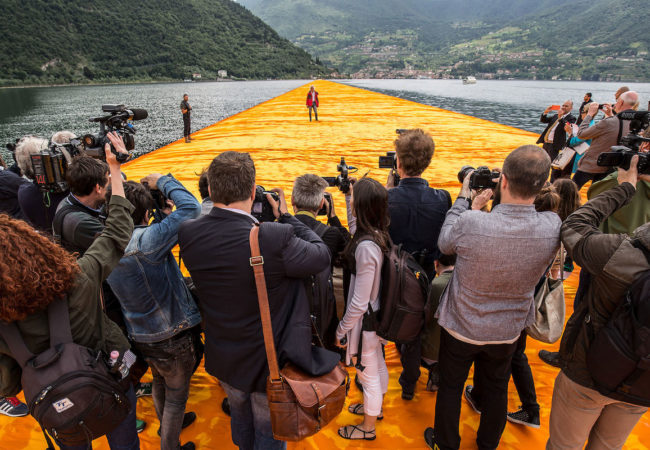 WALKING ON WATER, A Window Into the Creative Process of Artist Christo, Opens May 17

Documented with uncensored access to Christo and his team, Walking on Water is a cinema vérité look at the artist and his process, from inception to completion of 2016’s most visited art event—The Floating Piers.

The 2019 Las Vegas Film Festival will spotlight a mix of feature films and documentaries including a documentary about The Amazing Johnathan, and Robin Greenspun’s personal portrait of local businesswoman Amy Ayoub.