BROTHERHOOD – a gay neo-Nazi drama opens in US 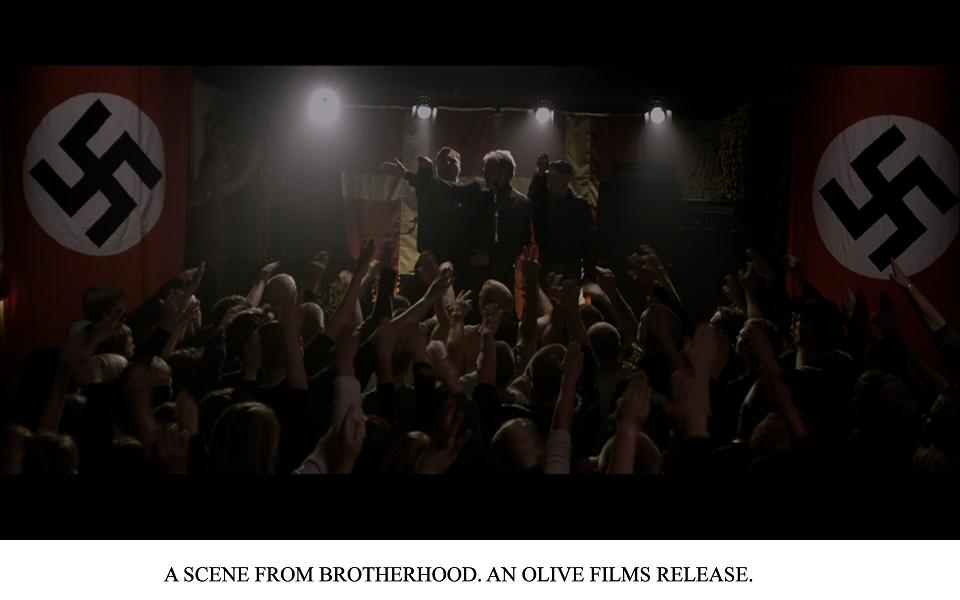 Nicolo Donato’s feature film debut) and winner of the Best Film prize at the 2009 Rome Film Festival, BROTHERHOOD, a gay neo-Nazi drama, will open in the US at the Cinema Village in New York on August 6 and at Laemmle Sunset 5 in  Los Angeles on August 20.  Other cities will follow.

When Lars (Thure Lindhardt) is cheated out of promotion to a sergeant, following rumors about his unbecoming behavior towards some of his men, he decides to leave the army.  Back home, his overly proper suburban parents succeed in driving him nuts in record time, as they do everything in their power to sweep the embarrassing incident under the carpet.

By chance, Lars runs into a small radical group of neo-Nazis led by the charismatic Michael ‘Fatso’ (Nicolas Bro).  Initially, Lars distances himself from their ideology and methods, but fuelled by defiance against the system in general – and his parents in particular – Lars decides to join the group. Fatso immediately spots the potential in the intelligent and eloquent Lars, even though his right-hand man, Jimmy (David Dencik), does not agree. Lars rapidly advances through the ranks and is nominated as an “A” member, despite the fact that this promotion should really have gone to Jimmy’s younger brother, Patrick (Morten Holst).

Lars moves out of his parents’ house and into board chairman Ebbe’s remotely situated summer cottage, which Jimmy is in the process of renovating.  Despite their initial dislike of each other, the attraction between the two men soon becomes too strong to ignore, and even though they feel torn between ideology and emotions, they begin a secret relationship.
Lars finally tires of all the ‘Sieg Heil’ greetings, false ideology and nightly attacks, and when he discovers the group’s views on gays are also about to reach boiling point, he tries to pull out. Jimmy now finds himself caught in a painful dilemma, for no matter what he does he will either end up betraying his younger brother, his ideology and his neo-Nazi ‘brethren’ – or his relationship with Lars.

The price of betraying the group is high, but when Lars and Jimmy make their final decision, destiny deals them one last fateful hand…