VIMOOZ recently conducted an interview with Bill Morrison, director of The Miners’ Hymns. The film has its world premiere at the 2011 Tribeca Film Festival.

In The Miners’ Hymn, experimental filmmaker and frequent TFF alum Bill Morrison combines newly shot aerial scenes that he filmed himself with historic found-footage images of the mining communities of Northeast England that he culled from the British national archives. Morrison creates a moving and formally elegant tribute to this vanished era of working-class life, enriched by an original score by avant-garde Icelandic composer Jóhann Jóhannsson.

VIMOOZ: What brought you to make a film on this subject?
BM: This project came to me as a proposal from the producing company Forma to make a film about coal mining in Northeast England as a collaboration with the composer Jóhann Jóhannsson. I frankly didn’t know much about the industry other than reports during the Strike of 1984. As we began to research it, I realized that it told a story that was both timely and universal. Unions are threatened everywhere. Detroit’s population is now less than 800,000 people.

VIMOOZ: How long did the film take to make?
BM: It took over a year. We began research in May of 2009 and we had an edit ready for the performance premiere in July 2010. The master recordings of the soundtrack were not completed until late 2010, and the film was re-edited and finished in January 2011 to match those recordings.

VIMOOZ: What was the experience like compiling footage?
BM: At times I felt like a miner – I spent a lot of time underground picking through mounds of carbon. I spent a couple weeks visiting regional archives in Northern England in Spring 2009, as well as the BFI in London, and then again exclusively at the BFI in December 2009. We also excerpted from independent documentaries that were held by Amber Films, a film cooperative in Newcastle. In May 2010, we shot original aerial footage from a helicopter above the site of former collieries.

Over time I started to see patterns in what was filmed over the years. There were shots of miners attending rallies, going to work, in the mines, getting out of work, at play, at the Big Meeting in Durham  – these shots remained essentially unchanged from decade to decade, and they set up an interesting dynamic in edit.

VIMOOZ: Were you able to meet any of the subjects of the film or their relatives?
MB: I met with one of the key union organizers, a guy named Dave Douglass, who talked with us at his house over the course of an afternoon, and made his extensive video collection available to us to peruse for research. A really fascinating guy.

VIMOOZ: How did you come to collaborate with Johan Johannsson?
MB: Again, Jóhann was brought on board the project by Forma so I became familiar with his music after that. I feel very fortunate that Forma had the foresight to put us together.

VIMOOZ: How did your experience making this film differ with your past film projects?
MB: In most of my projects I choose the subject matter of the film and then go about developing it. In this case, I was brought on board a very exciting project with a rich visual history. And while it is not a straight doc, the specificity of time, place, and subject matter are a departure for me. In the region, it is still a very emotionally charged subject, and we are seeing how the same decisions that were made in the 1980s in the UK and all over the world–to break with local production, and to outsource labor and import products–has led to the economic climate we find ourselves in today.

VIMOOZ: Although you’ve been to Tribeca before, is it still exciting to have your film shown here?
MB: Much more so this year. In the past I have been to Tribeca with short films that are part of a program of other shorts. “The Miners’ Hymns” is my first documentary feature, and a world premiere as a finished film at the festival, so it is somewhat more visible.

VIMOOZ: How do festivals abroad differ from American festivals? Do you feel foreign audiences are more open to experimental filmmaking?
MB: I won’t try to generalize about all US film festivals or all foreign film festivals. But I have observed that many US cities require a car to get around in. That changes the dynamic of a festival, as venues and hotels tend to be more spread out, and meetings become less spontaneous. The best festivals are ones where the festival takes over a part of the town, and people stumble around on foot.

I also can’t speak for all audiences regarding their acceptance of experimental filmmaking. Firstly, I don’t consider “The Miners’ Hymns” to be particularly experimental work in nature. True, it is image and music driven, and it doesn’t have much text or any spoken words. But it really just tries to tell a “story” in a way that is appropriate to the subject matter. And that’s what any film should try to do, regardless of what category it is put into. I do feel like my previous work is more widely embraced abroad than it is in the US, but I’m not sure if that can be seen as a reflection of how much audiences embrace experimental filmmaking.

VIMOOZ: Has this film been to many festivals thus far/ will it?
MB: Tribeca is the film’s world premiere. We are certainly hopeful that there will be others to follow.

VIMOOZ: Any new projects?
MB: I am working on another music-driven film about a specific historic event, “The Great Flood”, which is a collaboration with the guitarist Bill Frisell. It’s about the Mississippi River flood of 1927 and how it influenced the emigration of the Delta Blues up north. We will premiere it at the Krannert Center in Urbana, IL in September 2011 before touring it. It will come to Zankel Hall here in NY in November 2011. 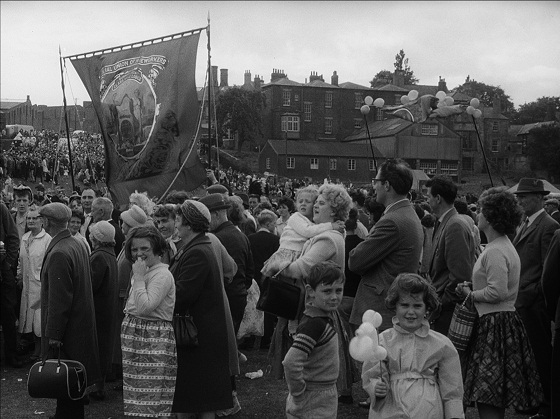