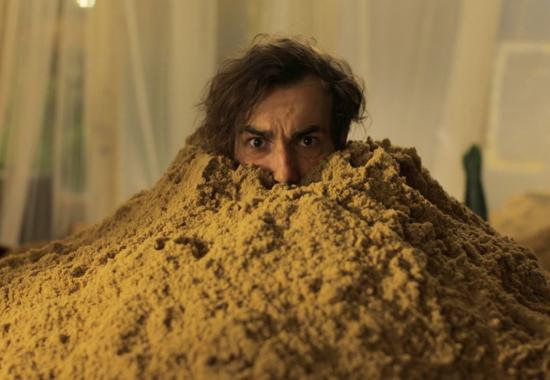 The San Joaquin International Film Festival will open its 5th Anniversary with the Valley Premiere of the Swiss comedy “The Sandman (Der Sandmann)” with the honorable presence of Director-Screenwriter Peter Luisi on Thursday, January 12, 2012 at 7:00pm at the Stockton Empire Theatre (1825 Pacific Avenue). Mr. Luisi will participate in a post-film Q&A following the film’s screening.

• From Director Peter Luisi: “I am delighted that my film ‘The Sandman’ has been chosen to open this year’s festival and that I have been invited to attend. Independent film festivals such as San Joaquin have become an increasingly important meeting point for us filmmakers and us film enthusiasts.”

• From SJIFF Founder Sophoan Sorn: “We are honored to welcome director and screenwriter Peter Luisi all the way from Zurich, Switzerland to Stockton. His original and sensational comedy ‘The Sandman’ – along with his presence and delightful behind-the-scenes stories – will make the Opening Night of the 5th Anniversary San Joaquin International Film Festival an unforgettable experience!”

Synopsis: “One morning, Benno finds sand in his bed. While he tries to ignore this, he soon realizes that he himself is the source of the sand. Day after day the sand increases, and time is running short. Finally, left with no choice, he asks Sandra the neighbor who runs a coffee shop under his apartment for help. Although Benno hates her with a passion, he starts having dreams of her each night. What could Sandra and the dreams have to do with the sand?” Starring Fabian Krüger, Irene Brügger, Beat Schlatter, Florine Elena Deplazes. (88 minutes; in Swiss German with English subtitles; produced in Switzerland in 2010-2011)

“The Sandman” held its World Premiere at Film festival Max Ophuels Prize in Saarbrücken, Germany in January 2011, where it won the Audience Award. The film was nominated for three Swiss Film Awards, including Best Picture and Best Screenplay. It won over 20 awards around the world and screened at festivals in Solothurn and Locarno in Switzerland, Newport Beach and Berlin & Beyond in San Francisco.