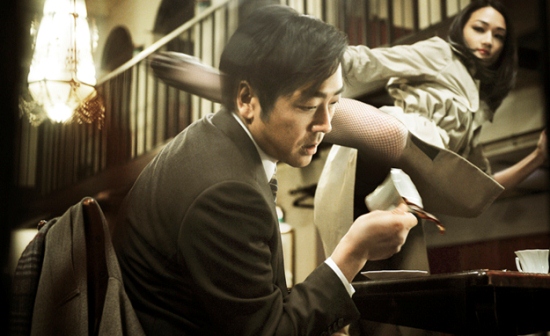 Hitoshi Matsumoto, one of Japan’s leading comedians returns to the 2013 Toronto International Film Festival with R100, following earlier TIFF premieres of his previous films BIG MAN JAPAN (2007) and SYMBOL (2009). The title of R100 is a word play on the Japanese ratings system, suggesting that the viewer should be at least 100 years old to see the film. Mr. Matsumoto thought of the title while doing publicity for his previous film SCABBARD SAMURAI. With R100, he wants to challenge the concept of rating, or any kind of judgment, of films–which he explores in a tongue-in-cheek subplot about the filmmaking process.

The universe that Mr. Matsumoto created for R100 is decidedly kinky. He dives headlong into the world of sexual fantasies, bypassing the usual fetish clichés. In a hilarious performance as a dead-pan, no-nonsense police officer, Matsumoto gets to ask the pivotal question: “What happens if you get what you asked for?”

A very ordinary man (Nao Omori) who takes care of his son while his wife lies in a coma, enters a very ordinary building. Following a seductive ride on a merry-go-round, he signs up with an exclusive club. Membership is one year only and cannot be cancelled under any circumstances.