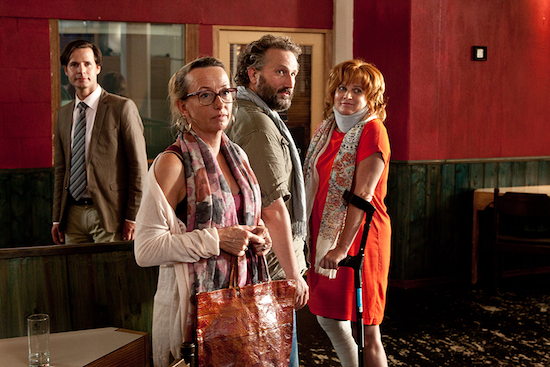 FOCUS ON A NATIONAL CINEMA: NETHERLANDS

Each year the festival shines the spotlight on one particular country in order to illuminate its range of cinematic treasures. Dutch cinema, for the most part, does not find its way onto the screens of U.S. Theaters. However, the Netherlands hosts two of the most important film festivals in the world: the International Film Festival Rotterdam and the International Documentary Film Festival Amsterdam. The EYE Film Institute on the banks of the IJ waterfront in Amsterdam is a film exhibition, collections, and education wonder. Dutch cinema is wildly diverse: popular comedies dominate the local box office, off-kilter narratives punctuate major film festivals’ competition sections, and lush dramas find their way around the world. We’ve brought some of all of that to you.

The Resurrection of a Bastard – DIRECTOR Guido Van Driel

Queer voices. Queer visions. Queer lives. Experience the best in films that convey every angle of the Lesbian, Gay, Bisexual, Transgender and Queer rainbow through our Cinema Q program during the festival, as well as year-round.

In The Name Of – DIRECTOR Malgorzata Szumowska

Will You Still Love Me Tomorrow? – DIRECTOR Arvin Chen

Women + Film is a year-round program of the Denver Film Society that not only celebrates the art and achievements of women filmmakers around the world, but also brings together an array of scholars, civil- and human-rights advocates, community leaders, and concerned members of the public to shine the spotlight on social issues through cinema and the dialogue it stimulates.

The One Who Loves You – DIRECTOR Katharyn Grant

Colorado’s filmmaking scene continues to grow at an unprecedented pace. More often than not, filmmakers are choosing to stay and work in the state rather than moving to Los Angeles or New York. This year’s Starz Denver Film Festival features a host of locally produced feature-length films and shorts, including an amazing 3-D documentary, and six shorts from the Denver Actor Project.

The One Who Loves You – DIRECTOR Katharyn Grant

Brought to life by producer, writer, and director Brad Stabio, the Denver Actor Project showcases the talents of local actors as they perform a variety of monologues from films and plays juxtaposed with scenes of their own creation. Beautifully shot and wonderfully acted, find six of these works scattered throughout the festival screening in front of these films:

Jordan Leigh – screening prior to A Field in England

Tracy Shaffer – screening prior to The Truth About Emanuel

Paul Page – screening prior to In the Name Of

Amie MacKenzie – screening prior to Northwest

Jeff Kosloski – screening prior to The Resurrection of a Bastard

Environmental advocacy has become a powerful cultural touchstone; as such, it is a core concern for the 2013 Starz Denver Film Festival. The Environment in Focus program features seven cutting-edge documentaries that have the ability to inspire audiences to make a difference through their interactions with the natural world.

If You Build It – DIRECTOR Patrick Creadon

New to the festival this year, SDFF presents a selection of the best new music videos from around the world. This compilation features funny, provocative, and mesmerizing videos with a wide range of genres, featuring local, international, indie, and industry-staple talent. These beg to be seen on the big screen and heard at full volume in surround sound. You might just find yourself dancing in your seat. Highlights include Placebo, “Too Many Friends,” narrated by Bret Easton Ellis; The Epilogues, “The Fall Out”; MGMT, “Your Life Is a Lie”; and Nine Inch Nails, “Came Back Haunted,” directed by David Lynch. Tuesday, Nov. 12, 6:45 p.m., Sie FilmCenter & Thursday, Nov. 14, 8:45 p.m. at Sie FilmCenter.

From the ’60s to the 80s, numerous TV stations across the country showed late-night movies under the moniker “Million Dollar Movies.” From Night of the Living Dead to The Night of the Hunter. From House of Wax to House of 1000 Corpses. From Holy Mountain toHoly Motors. From The Princess Bride to Princess Mononoke. It is in this tradition that we bring back “Million Dollar Movies” as a part of SDFF’s midnight programming.

So, you want to make a movie, but have no idea how to raise the money. Crowdsource fundraising has opened a world of new possibilities. Many Denver filmmakers have funded their projects through Kickstarter, and the Denver Film Society used Kickstarter to help finance the purchase of digital projectors for the Sie FilmCenter, the Ellie Caulkins Opera House, and Film on the Rocks. Panel moderator Robert Denerstein will lead a nuts-and-bolts, in-depth conversation covering the basics of running a successful crowdsource campaign. How promising is crowdsource funding? What are the keys to success? The road to fundraising success has taken a new turn, but it’s best traveled with good directions and an awareness of pitfalls. Our panel will help. Saturday, Nov. 9, 11:30 a.m. at Sie FilmCenter.

Animal rightsactivists hold the idea that all animals are entitled to the possession of their own lives, and that one of their most basic interests, that of not suffering, should be championed by all. SDFF 36 presents two thought provoking films on the subject. Lion Ark,features the world’s most ambitious and daring animal rescue, in which 25 lions are airlifted to freedom to a preserve in Colorado. American Mustang, is an artful blend of documentary and a character-driven narrative about the majestic wild horses of the American West-revealed as never before in stereoscopic 3D. Both stories present the intricate interplay between animals and man, providing insights and lessons for us all. These films will stir you into action by raising awareness of the issues these animals face. Join our panelists and festival guests as they talk about their passions and fierce dedication to making a difference in the lives of animals world over. Saturday, Nov. 9, 12 p.m. at Sie FilmCenter.

The Land That Feeds Us Presented by Hanna Ranch

Hanna Ranch, an “Environment in Focus” documentary selection, introduces us to holistic ranching pioneer Kirk Hanna. Dubbed the original “eco-cowboy,” his legacy lives on in the sustainable ranching movement – which is up against grim statistics. Over the last 30 years, half a million ranchers have quit or gone out of business due to relentless encroachment of development and misuse of land. Moderated by Culinary Director of Root Down and Linger Daniel Asher, this in-depth discussion over brunch will tackle the issues facing the agriculture industry in our country today – how can it withstand continual loss? Who will be at the forefront of the sustainable agriculture movement? Who will be the stewards of the land that feeds us? Panelists: Eric Schlosser (Fast Food Nation, Food Inc., Command and Control), Chris Pague (The Nature Conservancy), Matthew Jones (Slow Food USA), Dale Lasater (Lasater Grasslands Beef); Brunch by: Linger & Root Down Sunday, Nov. 10, 12 p.m. at RedLine.

How To Package And Sell Your Film

Join the best film agents in the business as they discuss what is often the hardest part of making a film: the financing. Robert Denerstein moderates a conversation about best practices for packaging, financing, and selling a film, and how to navigate the ever-changing marketplace. This is the third in a quarterly series of Industry Panels supporting professional development in the Colorado filmmaking community. Saturday, Nov. 16, 12 p.m. at Sie FilmCenter.

Lines along various parts of the entertainment/arts continuum seem to be blurring on a daily basis. Long gone are the days when watching a movie meant buying a ticket and sitting in a Theater. But over the past decade or so, series-most aired on premium cable channels-have accomplished what many criticize the movies for not doing: focusing on characters, developing compelling stories, and dominating the national conversation. Long- form storytelling even has spread to services such as Netflix, which provide on-demand streaming as well as disc rentals. Panel moderator Robert Denerstein leads a discussion about whether the best of television now rivals and possibly surpasses movies in both relevance and artistry. Our panelists also will consider which form penetrates more deeply into the national consciousness. Were you more likely to hear watercooler talk about such cable series asBreaking Bad, Homeland, and Game of Thrones than about Argo, last year’s Oscar winner for best picture? Our panel will examine seismic shifts in the entertainment business, and chime in on whether movies are keeping pace. And, yes, we’re talking content, not just delivery systems. Sunday, Nov. 17, 12:15 p.m. at Sie FilmCenter.

Medicine And The Movies: An Eye-Opening Look At America’s Health-Care Crisis

Two vitally important festival documentaries-Code Black and Remote Medical Area-provide revealing looks at different aspects of the U.S. health- care system, emergency-room treatment and medical care for underserved rural populations. These films-both accompanied by their directors-will serve as a springboard for a wide-ranging discussion about health care from the perspective of those who have witnessed the front-line dedication of physicians who serve highly stressed communities. Amid often-acrimonious arguments over Obamacare, it’s essential to learn from the people who’ve seen the system at its best and at its worst. Local health-care officials also will join the filmmakers and panel moderator Robert Denerstein for a discussion that reminds us that documentaries can bring important issues into sharper focus while keeping us in touch with the human face behind the policy and politics that typically tend to dominate public debate. Sunday, Nov. 17, 2:15 p.m. at Sie FilmCenter.

2013 Savannah Film Festival Runs Oct 26 to Nov 2; HANK AND ASHA, THE PRETTY ONE Among Lineup