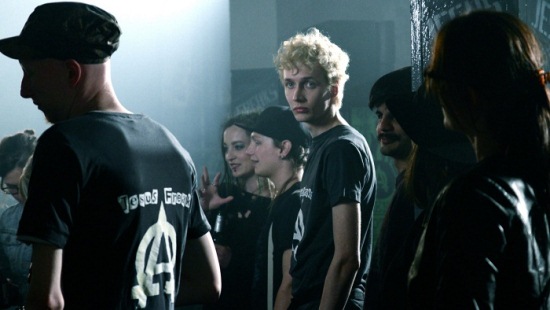 NOTHING BAD CAN HAPPEN

A dark, mischievous, and unsettling fable about a strange vagabond, Borgman takes the concept of home invasion to captivating new levels. Driven by the authorities from his underground hideout, the enigmatic Camiel Borgman is on the run. Covered in dirt, he arrives at Marina and Richard’s large suburban home asking to use their shower, thus beginning a game of sly calculation as he insinuates himself into their lives. He soon starts to manipulate the family with almost preternatural charisma as his more sinister plans make themselves known in chilling fashion. Filled with nasty humor and demonic imagination, van Warmerdam’s film shows that “evil comes in everyday form, embodied within ordinary, normal, polite men and women…enacted not just on cold winter nights but in the optimistic summer, beneath a warm and comforting sun.”—Alex van Warmerdam. (113 mins.)

A shocking tale of devotion gone horribly wrong, The Sacrament offers a disturbing vision of the power of groupthink. Patrick is a photographer whose once drug-addicted sister Caroline is a member of an isolated sober-living community in Mississippi. Patrick discovers that the program is closer to a communal-living collective and that there is a strange and charismatic leader of the group, known only as “Father.” When his sister leaves the country to start a new utopian society in the jungle, he enlists two co-workers to shoot a documentary on their whereabouts. Based on detailed research of the infamous Jonestown massacre, The Sacrament provides a terrifying examination of modern religion, charismatic influence, and the exploitation of power as West explores the horrific idea of a man who can talk people into killing themselves. (95 mins.)

“Folman’s follow-up to his strikingly rotoscoped Waltz with Bashir is a bold, metaphysical sci-fi satire: a live-action set-up that goes down the rabbit hole of loony animation partway through. Based on a novel by Solarisauthor Stanislaw Lem, The Congress sees Robin Wright playing Robin Wright, an actress with diminishing options in a savage and surreal movie business. When her agent (Harvey Keitel) delivers an ultimatum, Wright’s only choice is to sell her very identity. Plunged into a lurid Orwellian future, she must rediscover herself with the help of her personal animator (Jon Hamm) and human doctor (Paul Giamatti).”—London Film Festival. “[A] visionary work…it’s lyrical and mysterious, contemplating age-old sci-fi questions (of artificial intelligence, of perception versus reality) while grafting them onto a commentary about the changing nature of movies.”— RogerEbert.com. (120 mins.)

Young Tore belongs to the fervent Jesus Freaks, a fundamentalist Christian punk movement rebelling against established religion whilst at the same time following Jesus’s precepts of love. One day, in what appears to be a miracle, Tore manages to repair a car that has broken down and gets to know the driver, Benno. Before long, Tore moves into a tent in Benno’s garden and gradually becomes part of his family. But Benno can’t resist playing a cruel game, designed to test Tore’s faith. As the violence become more and more extreme, Tore’s capacity for love is pushed to its limits. “Intense and gripping…a robust and compelling first feature…deserving of a special Palme d’Horreur.”—Variety. (110 mins.)

“As a pregnant Esther (Alexia Rasmussen) walks home, she is viciously attacked by a hooded assailant. In the wake of this traumatic event, she finds some consolation and normalcy in the kindly Melanie (Alexa Havins), whom she meets at a support group. But a chance encounter makes it clear that nothing—and no one—in Esther’s life is as it appears. Setting off a chain reaction of increasingly shocking revelations, Proxytwists and turns its way through loss, grief, and death. The surprise standout is auteur Joe Swanberg in a supporting role as Melanie’s husband. Be warned: Proxy begins with some deeply disturbing content, but this immensely challenging thriller will reward audiences who stick with it as it delves into very dark territory and confronts our every assumption and belief about what we have seen.”—Toronto International Film Festival.(120 mins.)

A group of friends and ex-lovers learn why you should not throw a dinner party the night a mysterious comet is passing close to Earth in this mind-bending science fiction thriller. The first glasses of wine have barely been poured when tensions start to rise. None of that matters, however, when the lights go off throughout the neighborhood, all except for one house a few blocks over, lit up like a beacon in the darkness. “Coherence is a cerebral low-budget sci-fi that dives headfirst into a pool of quantum mechanics and theoretical physics. It’s a tightly focused, intimately shot film that quickly ratchets up the tension and mystery.Coherence is relationship drama turned on its head, giving you plenty to think about without spoon-feeding you any answers.”—Fantastic Fest. (89 mins.)