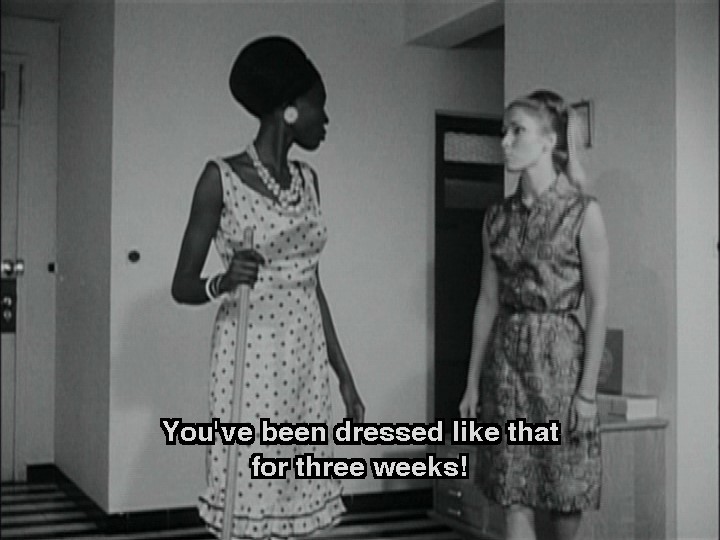 Eight classic films from Martin Scorsese’s The Film Foundation will screen at this year’s 2015 Seattle International Film Festival running May 14 through June 7, 2015. Taking place during the final week of the Festival are the North American premieres of two restored films: 1966’s Black Girl (La Noire de…) (pictured above) from “the father of African cinema” Ousmane Sembène on June 1 and 1978’s Alyam, Alyam from Moroccan master Ahmed El Maanoui on June 7.

Established in 1990 by Martin Scorsese, The Film Foundation is dedicated to protecting and preserving motion picture history and has helped to restore over 620 films in the last 25 years.

Carl Spence, SIFF’s Artistic Director, says, “Martin Scorsese has been shining a light on the urgent work of film preservation through The Film Foundation for 25 years. Through his efforts, we are able to publicly showcase these films from around the world that audiences would not otherwise have a chance to see projected on a big screen. The enthusiastic response from SIFF audiences is a testament to our belief that movie lovers from all walks of life want to experience films in cinemas. It is also fitting that we are presenting the North American premieres of two films from Africa – it pairs nicely with the 12 contemporary features being presented in our African Pictures spotlight.”

Jennifer Ahn, Managing Director of The Film Foundation, says, “We are delighted that the Seattle International Film Festival is focusing on the importance of film preservation with its tribute to The Film Foundation’s 25th Anniversary. We’re especially pleased that the festival is presenting two remarkable works of global cinema: Black Girl (1966), directed by Senegal’s Ousmane Sembène and Alyam, Alyam (1978) by Moroccan filmmaker Ahmed El Maanouni. These films were restored through The Film Foundation’s World Cinema Project, and we welcome this opportunity to collaborate with SIFF on their international premieres.”

Following his father’s death, Abdelwahad is expected to provide for his mother and his seven brothers. But faced with the cycle of poverty that rural farmers seem doomed to repeat, he dares to hope for something better. Restoration by The Film Foundation’s World Cinema Project at Cineteca di Bologna/L’Immagine Ritrovata laboratory.

A model (Barbara Bel Geddes), a sociopathic millionaire (Robert Ryan), and a sympathetic pediatrician (James Mason) engage in a fraught romantic power struggle in Max Ophüls’ 1949 noir, only one of four movies the esteemed director made in the United States.

The Color of the Pomegranates
Armenia | 1969 | 77 minutes | Sergei Parajanov

Sergei Parajanov’s empirical masterpiece loosely follows the life of Sayat Nova, “King of Song,” an Armenian poet and musician born in the 18th century, through vibrant sets and costumes and hypnotic shots. This colorful and avant-garde masterpiece provides an utterly transformative cinematic experience.

Robert Siodmak’s 1946 psychological thriller follows a pair of identical twins with dueling personalities, one of which is a suspect in the murder of a doctor. The Dark Mirror dips into terrifying evil doppelganger territory, while at the same time hitting all the disturbing aspects of an effective melodrama.

Long thought a lost film, this cult masterpiece from director James Whale (Frankenstein) is a twisted gothic thriller, equal parts macabre nightmare and camp farce, about three lost travelers who seek shelter in a crumbling Welsh manor. 35mm restoration by the Library of Congress with funding provided by The Film Foundation.

Moira Shearer stars in this seminal 1948 drama from Michael Powell and Emeric Pressburger, one of the most highly regarded dance films in cinema history, about a young woman who works her way up the ladder of a prestigious ballet company.