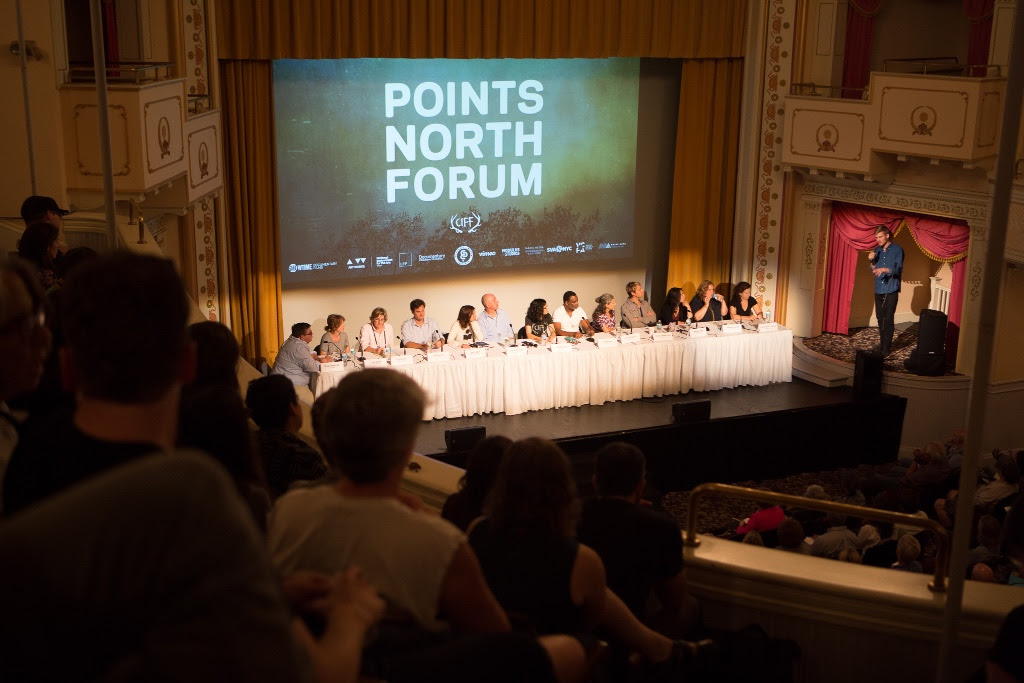 The Points North Forum has long been a top festival destination for filmmakers to find creative inspiration and professional development. Accessible workshops and panel discussions feature some of the documentary film industry’s most accomplished storytellers and influential decision makers.

This year’s program takes a deep dive into the evolution of the documentary arts in the digital age and tackles the changing conditions for nonfiction storytellers in a politically charged media environment. Moderated discussions with attending filmmakers, artists, funders, and industry leaders will address vital contemporary topics including race in America, press freedom, the politics of the ubiquitous documentary camera, and what’s coming up for the next generation of nonfiction virtual reality experiences.

Highlighted documentary craft panels include one on character-driven documentary with acclaimed director Steve James (Hoop Dreams, Abacus: Small Enough to Jail), which will be co-presented by Maine Media Workshops, and a session exploring the creative side of archival storytelling with director Sierra Pettengill (The Reagan Show), editor Nels Bangerter (Cameraperson, Let the Fire Burn) and writer/curator Eric Hynes (Museum of the Moving Image). An essential discussion of press freedom for the nonfiction community will feature Carrie Lozano (IDA Enterprise Fund), Katie Townsend (Reporters Committee on Freedom of the Press), Harlo Holmes (Freedom of the Press Foundation) and Sam Gregory (Witness).

One of the Forum’s most popular and beloved events is the Points North Pitch, which is celebrating its 8th year with a new Presenting Sponsorship from Showtime Documentary Films.

The pitch is part of the year-long Points North Fellowship, providing six teams of filmmakers from around the world an opportunity to work with mentors and present their feature documentary works-in-progress to a panel of influential funders, producers and broadcasters — all before a live audience at the Camden Opera House. The panel will determine one winner of the Points North Pitch and Modulus Finishing Fund, which includes an in-kind post-production package from Boston-based Modulus Studios.

“Our programming is driven by the belief that documentary storytelling is more important now than ever before,” says the Institute’s Program Director Sean Flynn. “It’s a privilege to bring together such a diverse, talented and accomplished group of filmmakers and industry leaders in Camden for urgent and inspiring discussions about the role of the documentary artist today.”

This year’s Forum expands to two new venues and features the addition of an invitation-only 1:1 Meetings program, connecting 25 additional filmmakers with works-in-progress to funders and industry representatives. Points North is also expanding its partnership with the LEF Foundation, organizing an invitation-only “Sustainability Roundtable” convening where funders, thought leaders and filmmakers from across New England will discuss the challenges of building a career and opportunities to collectively build a stronger documentary field.

Filmmakers, students and other Points North attendees will have numerous opportunities to connect with industry delegates throughout the festival weekend — formally during masterclasses and panels, and informally during CIFF parties and receptions.

10:00am – 11:30am (High Mountain Hall)
From Deep in The Archives
This conversation will take on the creative side of archival filmmaking — finding, understanding, and recontextualizing footage — then looking at how it succeeds, where it can falter, and how far is too far. Sierra Pettengill, archival researcher and director of THE REAGAN SHOW and Nels Bangerter, editor of CAMERAPERSON and LET THE FIRE BURN will join writer and curator Eric Hynes, none of whom are lawyers, to go beyond the question of “is this fair use?” to address archival’s emerging creative and ethical issues.

10:00am – 11:30am (Camden Opera House Tucker Room)
What Do Cameras Do?
Jason Fox, Editor of the new journal World Records, invites a group of CIFF filmmakers to address a seemingly straight-forward question: what do cameras do? We often assume that cameras simply represent reality. Yet, from the cameras in our pockets to the cutting edge of virtual reality technology, the choices documentarians make about the cameras they use, how to use them, and the implications of those choices have never been so varied and complex. How do the decisions these creators make inform their relationships with their subjects?  When are cameras revealing, and when are they invasive? In the age of the camera phone, is everyone a documentarian?

12:00pm – 1:30pm (High Mountain Hall)
The Subject of Interrogation
The motives of subjects for being interviewed do not necessarily align with those of the filmmaker’s. The central question of this panel bridges that divide: at what moment did these filmmakers realise the story they were telling was different from the one they were being told? How did they convey their vision to their subjects, and what information did they deliberately withhold? In which ways do they justify their creative and investigative methods? This session breaks open the assumption of objective and virtuous documentary truths and deliberately lays bare, as do these filmmakers, the messiness of pursuing a story beyond the headlines… and the below the facades people often wish to present.

12:00pm – 1:30pm (Camden Opera House Tucker Room)
Aural Histories: Three Encounters with Documentary Sound
Sound designer and artist Ernst Karel’s work is behind some of the most critically acclaimed documentaries of recent years, including MANAKAMANA and LEVIATHAN. In this masterclass, he reveals his creative process in a journey across three encounters with documentary sound — recording, listening, and editing — and the transformative potentials of each.

2:00pm – 3:30pm (High Mountain Hall)
Whose Stories?
From Black Lives Matter to Charlottesville, the stark realities of racial violence and the enduring legacy of white supremacy have become central to America’s political discourse in recent years. This moderated conversation between Sabaah Folayan (WHOSE STREETS?) and Lee Anne Schmitt (PURGE THIS LAND) explores the role of the documentary artist in helping audiences navigate and understand this historical moment. How can both white and black filmmakers confront the traumas of racism while remaining accountable to their histories, their communities and their racial identity? And how might documentary open up new frames for discourse and spaces for healing?

2:00pm – 3:30pm (Camden Opera House Tucker Room)
Real Stories, Virtual Worlds
Like other new media in their heydays, virtual reality has been greeted by both the inflated expectations of its promise as an “empathy machine” and skepticism about its viability as the “future of storytelling.” Nevertheless, the technologies that enable filmmakers, journalists and artists to tell reality-based stories in virtual worlds continue to mature each year. The groundbreaking VR creators featured in this year’s Storyforms: Remixing Reality exhibition discuss the nonfiction potentials of volumetric capture, 3D game engines, multi-sensory experience design and next generation VR platforms.

5:00pm – 6:30pm (High Mountain Hall)
Points North Reception presented by LEF Foundation
After a busy day of panels, masterclasses and screenings, join the LEF Foundation for drinks, light fare and conversation with new friends at this annual gathering of the documentary film community.

10:30am – 12:30pm (Camden Opera House Auditorium)
Points North Pitch (presented by SHOWTIME Documentary Films)
Whether you’re a film professional or not, the Points North Pitch is an invaluable chance to learn about the process of developing a documentary film and see first-hand how leading decision-makers evaluate projects. Six teams of filmmakers selected for CIFF’s Points North Fellowship will pitch their works-in-progress to a distinguished panel of funders, broadcasters, distributors and producers. Each pitch lasts exactly 7 minutes, followed by 12 minutes of critical feedback. Filmmakers will have an opportunity to win the Points North Pitch Prize and Modulus Finishing Fund, which includes an in-kind post-production package from Modulus Studios. The winner will be announced on Saturday at 5:30pm at the Dowling Walsh Reception in Rockland. This is a free, public event.

1:30pm – 2:30pm (High Mountain Hall)
The Verité Director: A Conversation with Steve James and Jeff Unay
Presented by Maine Media Workshops
Acclaimed documentary director and producer Steve James (HOOP DREAMS, THE INTERRUPTERS) has built a career on making intimate, verité films that reveal deep emotional truths about the unforgettable characters he follows. Director Jeff Unay builds on this tradition with his cinematic debut feature, THE CAGE FIGHTER. In this wide ranging discussion, the two directors explore the creative challenges of being a verité director, building deep relationships with subjects, and distilling the messiness of everyday life into a powerful character-driven story.

3:00pm – 4:30pm (High Mountain Hall)
Truth and Power: Free Expression for Nonfiction Storytellers
Telling stories that challenge powerful institutions and figures has never been easy, but in 2017, press freedom seems to be increasingly under attack in the United States and around the world. Filmmakers, journalists and media activists face hostile political leaders, well-funded legal challenges, threats of arrest and assault, difficulty accessing public records, and digital technologies that makes it harder to protect sources and source material. Leading thinkers and advocates for investigative and activist media makers will discuss the challenges and opportunities presented by this new climate, while sharing tools, techniques and strategies that independent filmmakers can use when speaking “truth to power.”

7:30pm – 9:30pm (Steel House, Rockland)
Cryptoparty! (or: The Internet Ain’t What It Used to Be)
Co-presented by Steel House
From all-powerful platforms to hackers and government surveillance, it’s a scary, confusing digital world out there — but we’re here to make fighting back with encryption a little more fun. Join security expert Harlo Holmes and other special guests for pizza, beer and an informal, hands-on exploration of principles and tools you can use to protect your privacy and your work in the age of digital communications.