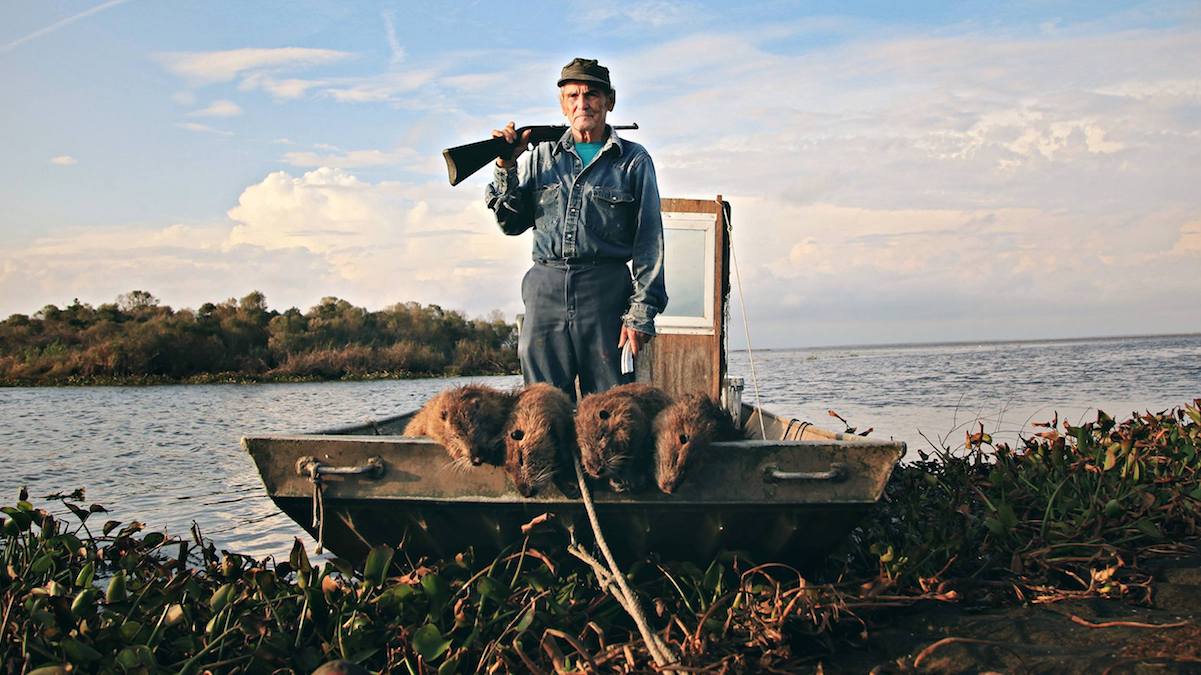 Rodents Of Unusual Size takes us up-close into a large region south of New Orleans that survived hurricane Katrina and is now facing its latest threat—hordes of monstrous 20 pound rodents known as the nutria.

The documentary by award winning filmmaking team Chris Metzler and Jeff Springer (Plagues and Pleasures of the Salton Sea and Everyday Sunshine: The Story of Fishbone) & co-director Quinn Costello. The film will screen as part of 2017 DOC NYC at the IFC Film Center on November 15th at 7:15pm.

Louisiana’s coastal wetlands are one of the largest disappearing landmasses in the world and the voracious appetite of this curious and unexpected invasive species from South America is greatly accelerating coastal erosion, which in turn makes the area even more vulnerable to hurricanes. As the coastline disappears, the hunters and trappers, fishermen and shrimpers, storytellers and musicians that makes Louisiana a country unto itself are leaving en masse. Nonetheless, a stalwart few remain and are fighting back.

Rodents Of Unusual Size tells the story of one such diehard, Thomas Gonzales, and his community of Delacroix Island, as they resist the invasion of the rodents. The state of Louisiana has started a program that pays a $5 bounty for every nutria tail collected, which has helped the effort, by encouraging former trappers to hunt the nutrias for their tails instead of the fur. Others have tried business ventures to harvest the nutria for their fur and meat, in hopes that by creating a demand for this sustainable resource, they could help protect the wetlands and fight back the rodents.

And yet despite the havoc this invasive species has wrought on Southern Louisiana, it has also been embraced by the culture. The Audubon Zoo in New Orleans has opened a nutria exhibit, the local Triple-A baseball team has a nutria as a mascot, a fashion collective designs clothing made out of nutria promoting it as “sustainable fur” and even some Cajuns have nutria as pets.

Through the offbeat and unexpected stories of the people confronting the nutria problem, the film confronts issues surrounding coastal erosion, the devastation following hurricanes, loss of culture and homeland, and the resilience of the human spirit.

LOVELESS, THE WOUND and KINGDOM OF US Win BFI London Film Festival Awards