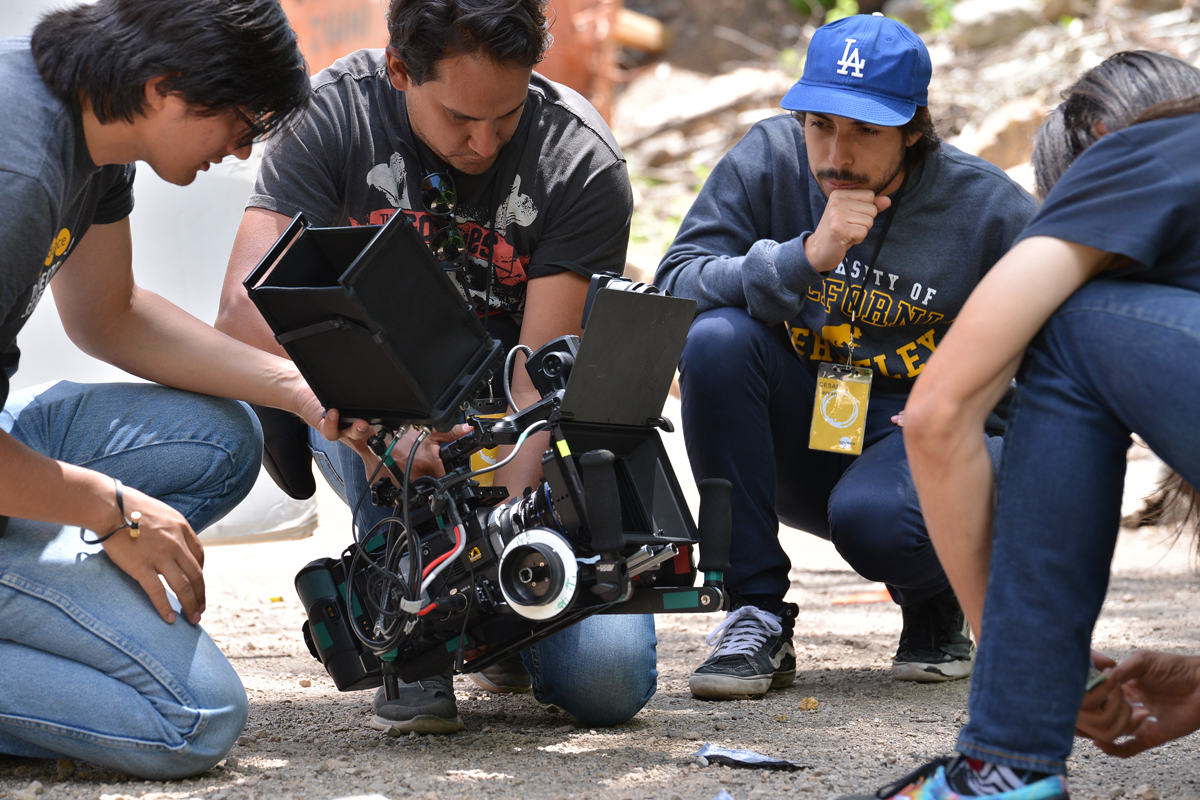 Thirteen new independent feature projects from the U.S., Cuba, Kenya, Mexico, Morocco, and Palestine have been selected for the 2018 Sundance Institute Directors and Screenwriters Labs. At the Directors Lab (May 28-June 21), filmmakers will rehearse, shoot and edit key scenes from their scripts, working closely with industry advisors, actors, and production crews to help drive creative growth via an immersive and hands-on experience at the Sundance Resort in Utah. The Screenwriters Lab from June 23-28 fosters a similar environment of dynamic inspiration as participants focus on the art and craft of screenplay writing with one-on-one support from Institute advisors . Overseen by Feature Film Program Founding Director Michelle Satter and Labs Director Ilyse McKimmie, the Labs begin a year-round continuum of customized support for Fellows, which can include creative mentorship, granting, and guidance from industry professionals.

“We’re very excited to be supporting this remarkable group of storytellers whose work is defined by their bold and singular visions,” said Satter. “Using the art form of cinema to explore contemporary issues and our essential humanity, their films are deeply personal, powerful, and timely. We look forward to continuing our partnership with these artists as creative and strategic advocates throughout their filmmaking process.”

Doha – The Rising Sun (U.S.A./Morocco) / Eimi Imanishi (writer/director): Disheartened by her deportation from Europe, Mariam is forced to return home to Western Sahara. Adrift in the very place that once was her home, she searches for the means to assert agency over her own life.

Eimi Imanishi is a Japanese American filmmaker who grew up in France. She directed two award-winning short films: Battalion to My Beat, which screened at the Toronto International Film Festival and won the Canal+ Award for Best International Short at Clermont-Ferrand in 2017, and One-Up, which won Best Narrative Short at Indie Memphis, was released online as a Vimeo Staff Pick film, and won Short of the Week. Imanishi was supported at the 2018 Sundance Institute Screenwriters Lab and the Film Independent Directors Lab of the same year.

Hawa Hawaii (Kenya) / Amirah Tajdin (writer/director): Hamedi, a Muslim drag queen, returns home to be with his dying mother. Back in Mombasa for the first time in decades, yet still facing his mother’s longstanding disapproval of his lifestyle, he decides that Taarab, the fading art of Swahili orchestral singing, may be the only way to mend their deeply fractured relationship.

Amirah Tajdin is a Kenyan artist and filmmaker of Afro Arab and Indian heritage. Her co-directed short, Marea de Tierra, premiered in Directors’ Fortnight at the Cannes Film Festival as part of the Chile Factory Residency. The film also screened at the 2016 Sundance Film Festival and went on to play at over 20 film festivals worldwide. Her short films Fluorescent Sin and His To Keep played various festivals, with Fluorescent Sin garnering Jury Special Mention awards at the Zanzibar International Film Festival and Film Africa London.

Suzanne Andrews Correa is a Mexican American screenwriter and director and a recent MFA graduate of the Film Program at Columbia University. Her latest short, La Casa de Beatriz, premiered at the 2017 Morelia International Film Festival, received awards from the Princess Grace Foundation and Directors Guild of America, and can now be seen on HBO Latino/HBO GO/HBO NOW. Andrews Correa was supported at the 2018 Sundance Institute Screenwriters Lab, where she was the recipient of the Sundance Latinx Fellowship, and a winner of the Atlanta Film Festival feature screenplay competition.

Josephine (U.S.A.) / Beth de Araújo (writer/director): After accidentally witnessing a rape in Golden Gate Park, eight-year-old Josephine is plunged into a maelstrom of fear and paranoia. Surrounded by adults helpless to assuage her and unable to understand her, she acts out with increasing violence, searching for any way to regain control of her own safety.

Beth de Araújo is a writer and director recently featured in Filmmaker Magazine’s 25 New Faces of Independent Film. Her feature screenplay, Josephine, participated in the 2018 Sundance Screenwriters Lab and is a recipient of the SFFILM Rainin Filmmaking Grant. Josephine will mark her feature directorial debut. In 2017, Araújo directed 2 episodes of television for Lifetime Movie Network and was a shadowing director within the Ryan Murphy HALF Program. Her recent short film, I Want To Marry A Creative Jewish Girl, was shot through the AFI Directing Workshop for Women, based on her Gawker essay of the same name.

The Life and Death of Cassandro (U.S.A.) / Roger Ross Williams (co-writer/director) and David Teague (co-writer): Saúl Armendáriz, a gay lucha libre wrestler, creates a powerful and popular alter ego named Cassandro to help him fight in the ring and face his personal demons. When Cassandro begins to take control, this superhero story gets turned on its head as it looks like Saúl’s alter ego may become his downfall.

Roger Ross Williams is the first African American director to win an Academy Award for his short film Music By Prudence. Williams has directed a wide variety of acclaimed documentary films including God Loves Uganda, which was shortlisted for an Academy Award, and Life, Animated, which was nominated for an Academy Award in 2017. He is on the Board of Governors for the Academy of Motion Pictures Arts and Sciences representing the Documentary branch and serves on the Diversity Committee. The Life and Death of Cassandro will mark his debut as a fiction feature director.

David Teague is a writer and documentary film editor. He has edited five Oscar-nominated documentaries, including one winner. His work includes Life, Animated, Cutie and the Boxer, The Departure, E-TEAM, Mondays at Racine, and Freeheld.

Shock Labor (Cuba) / Marcos Díaz Sosa (writer/director): Cuba, 1988. Wilma struggles to maintain a small farm in the Cuban countryside while caring for her disabled husband, but her fortunes change when she is discovered to be a talented skeet shooter who can represent her country. As Wilma rises to stardom, a tornado sweeps her away to a vast luxury resort. Though she finds herself lauded by her country’s ruling class, Wilma realizes that there is no place like home and knows she must find her way back to her farm.

Marcos Díaz Sosa is a Cuban film director and playwright. At the age of 17, he directed Fractal, a 60-minute documentary that won an award at the fifth Muestra Joven in Cuba. His short film Natural Phenomena premiered in competition at the Guadalajara Film Festival . He has worked with the State Theatre of Jena, Germany, and co-directed the play Bad Taste at the Offene Welt Internationales Festival, Ludwigshafen, Germany, in 2015.

Wild Indian (U.S.A.) / Lyle Mitchell Corbine, Jr. (writer/director): Two Anishinaabe men are inextricably bound together after covering up the savage murder of a schoolmate. After years of separation following wildly divergent paths, they must finally confront how their traumatic secret has irrevocably shaped their lives.

Lyle Mitchell Corbine, Jr. is a filmmaker whose most recent short film, Shinaab, played at the 2017 Sundance Film Festival, 2017 Toronto International Film Festival, and 2017 AFI Fest. He was supported at the 2017 Sundance Institute Screenwriters Lab and has been a recipient of numerous grants and fellowships from Sundance Institute, Time Warner Foundation, and the Minnesota State Arts Board. Wild Indian represents his feature directorial debut.

Wolf in White Van (U.S.A.) / Andrew Bruntel (director), Ben Collins (co-writer), and Luke Piotrowski (co-writer): Isolated by a disfiguring injury since the age of 17, Sean Phillips is the sole creator of The Trace Italian, a turn based, fantasy role-playing game run entirely through the mail. When tragedy strikes two of his young players, Sean is forcoed to re-examine his self-inflicted departure from the world in which most people live. Based on the novel by John Darnielle.

Andrew Bruntel was born and raised in a rural town on the edge of Pennsylvania’s rust belt. After studying experimental filmmaking and design in Baltimore, he moved to Los Angeles to work for Mike Mills at The Directors Bureau. He has since become a director and writer, creating award winning short films, commercials and music videos for artists such as Will Oldham, St. Vincent, No Age, and Liars.

Ben Collins was born in Alabama and spent the first 24 years of his life in the south. Collins and his wife moved to Los Angeles in 2009, where he worked in commercial casting for several years. He co-wrote the film Super Dark Times, which premiered at the Tribeca Film Festival and was released in 2017.

The Doubt (Palestine) / Ihab Jadallah (writer/director): After twelve years in prison, Ibrahim returns home to his wife and a son he has never met. He goes about rebuilding his life in the West Bank and begins to bond with his son, Yousef, but when he begins to doubt whether he is actually the boy’s father, his world starts to tear apart.

The Palestinian filmmaker Ihab Jadallah has written, directed, and produced several highly acclaimed short films, including The Flower Seller , which screened at the Clermont-Ferrand International Short Film Festival and the Abu Dhabi Film Festival. The screenplay for his feature The Doubt was selected for the Development Lab at EICTV in Cuba, and received a grant from the Arab Fund for Arts and Culture.

The Legend of Ochi (U.S.A.) / Isaiah Saxon (writer/director): On the Island of Carpathia, a teenage girl breaks with her Cossack father to protect a mythical species of animals who communicate using a unique, non-verbal language. In the process, she sheds new light on the mystery surrounding her dead mother, whose absence from her life is more complicated than it seems.

Isaiah Saxon is a writer-director and a founder of the film and animation studio Encyclopedia Pictura. Isaiah has directed videos for Björk, Panda Bear, Kanye West, Grizzly Bear, and others. His work explores the uncertainties of our connection to nature and technology.

Noche de Fuego (Night on Fire) (Mexico) / Tatiana Huezo (writer/director): On a remote mountain in coastal Mexico, eight-year-old Ana and her two best friends, Paula and Maria, grow up in the shadow of cartel violence. They kill snakes, and play dress up in the houses of those who have fled, creating their own world in the midst of growing violence.

Tatiana Huezo is a Mexican-Salvadorian filmmaker. Her most recent film, Tempestad, was one of the most acclaimed documentaries of 2016. Following its premiere at the Berlinale, the film was recognized by the Mexican Film Academy with four awards, including Best Director and Best Documentary Film. Her first documentary , The Tiniest Place, was shown in over 50 international film festivals. Noche En Fuego will be her first fiction feature film.

Vuk Lungulov-Klotz is a transgender filmmaker, born in New York City to Chilean and Serbian immigrants. He graduated from SUNY Purchase Film Conservatory and has been working and living in Brooklyn ever since. His debut feature, Quiltro, was part of the 2017 Sundance Screenwriters Intensive. His trans-themed short film, Still Liam, was part of the Inside Out 2017 Toronto LGBT Film Festival, the GAZE international LGBT Film Festival, and was an award-winner at the Trans Stellar Film Festival.

Righteous Acts (U.S.A.) / Alicia Ortega (writer): Homeschooled teenager Judith thinks she’s finally found her people when she joins the cast of a megachurch hell house, where evangelical teens aim to scare people into salvation. But when she doesn’t land the coveted role of the Abortion Girl, she convinces herself she’s the only player doing God’s work—and it’s her holy duty to expose the true wages of sin.

Alicia D. Ortega was born in Washington, D.C., but considers San Antonio her hometown. She holds a B.A. from Stanford and an MFA from Louisiana State University, where her novel The Ghost You Deserve won the Robert Penn Warren Award for best MFA thesis. A participant in the 2018 Sundance Screenwriters Intensive, Ortega recently returned to Texas.

image credit: Cesar Cervantes and Vincent Reyna on the set of “Hot Clip” at the 2016 Directors Lab. © 2016 Sundance Institute | Photo by Brandon Cruz.