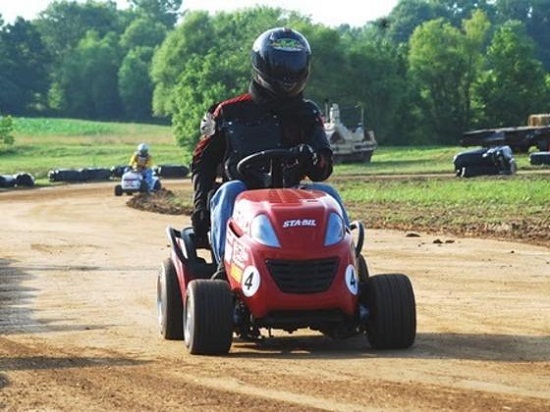 On Your Mark, Get Set, MOW! has been officially selected to screen at the 2012 DC Independent Film Festival, Saturday, March 3, 2012, 5:00pm. The documentary film which will make its world premiere, will explore the world of lawn mower racing through the eyes of a Michigan family who has lost six members to Huntington’s disease and uses the sport to raise awareness of the disease and funds for its research.

Filmmaker Mike Ratel has been following the sport of lawn mower racing for five years and will tell the story of how weekend “Turf Warriors” use their hobby to help raise awareness and funds to battle Huntington’s disease, a hereditary degenerative neurological disorder.

To offer an explanation of Huntington’s disease to a general audience Producer/Director Ratel has conducted on-camera interviews with medical professionals, US congressmen, Huntington’s disease advocates, and Arlo Guthrie who lost his father Woody Guthrie, an American folk music icon, to the disease in 1967. Ratel has also spent hundreds of hours filming, traveling and living with lawn mower racers from across the country to gain a solid understanding of the people behind the sport.

“This group of people is one of the most benevolent and kindhearted communities you’ll ever see,” said Ratel from his Washington, D.C.-based production studio. “The family we focus on in the film has lost seven members to the disease, but still finds time to travel the country racing lawn mowers, enjoying life and helping create awareness. Their annual lawn mower race fundraiser is an award-winning event that has gained acclaim far and wide. I’m proud and honored to be telling their story.”