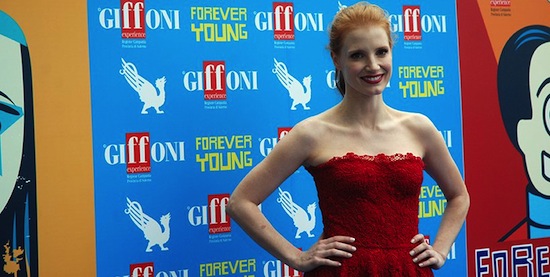 Jessica Chastain was nominated for an Academy® Award for her performance in the 2011 critically-acclaimed drama The Help and stars opposite Golden Globe®-nominee James McAvoy in Myriad Pictures’ double-feature film project, THE DISAPPEARANCE OF ELEANOR RIGBY: HIM and THE DISAPPEARANCE OF ELEANOR RIGBY: HER. Ned Benson (In Defiance of Gravity) wrote the two scripts and will direct both films.

The love story explores how a married couple in New York City deals with an emotional, life-altering experience, from the two different perspectives of the husband, Conor, (McAvoy), a restaurant owner, and of the wife, Eleanor, (Chastain), who goes back to college. Cassandra Kulukundis (A Late Quartet, In Defiance of Gravity) is producing. Kulukundis is also casting director (There Will Be Blood, Shattered Glass)