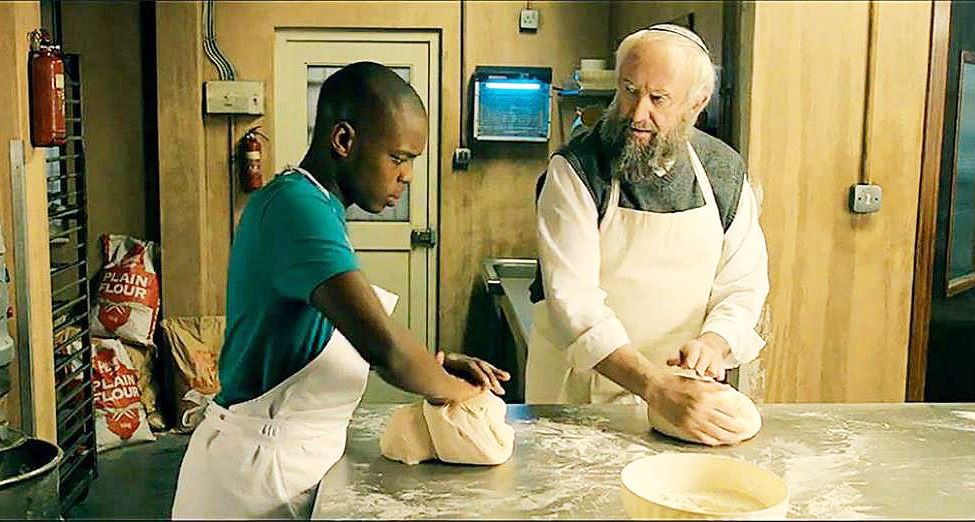 The 35th edition of the San Francisco Jewish Film Festival returns to the Bay Area July 23 to August 9, 2015, and will kick off with director Jonathan John Goldschmidt’s DOUGH (pictured above), a British dramedy about an old elderly Jewish baker (Jonathan Pryce) struggling to keep his business afloat until his young Muslim apprentice (Jerome Holder) accidentally drops cannabis in the dough.

The 2015 San Francisco Jewish Film Festival closes with Erez Miller’s EAST JERUSALEM, WEST JERUSALEM, about Israeli singer-songwriter David Broza who sets out to realize his dream of cooperation and dialog between Israelis and Palestinians through music.

The Centerpiece Narrative is MY SHORTEST LOVE AFFAIR, written and directed by Karin Albou, which follows Louisa (Karin Albou)and Charles (Patrick Mimoun), former lovers who, now middle-aged, have crossed paths at an arts festival in Paris. After a night together Louisa winds up pregnant. Together the two try to make their relationship work again.

Following its world premiere at the 2015 Tribeca Film Festival, THE ARMOR OF LIGHT will screen as the festival’s Centerpiece Documentary. Directed by Abigail Disney, the film follows the journey of Reverend Rob Schenck, a Jewish born evangelical minister who finds the courage to preach about the toll of gun violence in America.

In keeping with tradition, to highlight the programming in Berkeley, VERY SEMI-SERIOUS has been selected as the Berkeley Big Night film . Winner of the San Francisco International Film Festival Golden Gate Award for Best Bay Area Documentary, VERY SEMI-SERIOUS (former Bay Area filmmaker Leah Wolchock) is an offbeat meditation on humor, art and the genius of the single panel. The film takes an unprecedented behind-the-scenes look at The New Yorker and introduces the cartooning legends and hopefuls who create the iconic cartoons that have inspired, baffled—and occasionally pissed off—all of us for decades.

The festival will open in Palo Alto with Yari and Cary Wolinsky’s RAISE THE ROOF, a look at professor Rick Brown who works with his wife Laura to rebuild a series of now vanished synagogues as they track the labor and love that illuminate these glorious pieces of history.

PEGGY GUGGENHEIM: ART ADDICT will screen for Bay Area audiences following its World Premiere at the 2015 Tribeca Film Festival as the Oakland Opening Night film. PEGGY GUGGENHEIM: ART ADDICT offers a rare look into Guggenheim’s world: blending the abstract, the colorful, the surreal and the salacious, to portray a life that was as complex and unpredictable as the artwork Peggy revered and the artists she pushed forward.

On Friday, July 31 at the Castro Theater, the SF Jewish Film Festival will present a day of social justice films, : Take Action: Repairing the World One Film at a Time. The five-film lineup embodies the Jewish value of tikkun olam – which suggests humanity’s shared responsibility to heal, repair and transform the world. This event will screen films in collaboration with local organizations to inspire action on the issues presented in the films: Judith Helfand’s BLUE VINYL (2002); Aviva Kempner’s ROSENWALD; Berkeley based filmmaker Rick Goldsmith’s MIND/GAMES: THE UNQUIET JOURNEY OF CHAMIQUE HOLDSCLAW; Melissa Donovan’s ZEMENE and Dara Bratt’s THE SINGING ABORTIONIST.

Other new documentaries by local filmmakers working with Jewish themes, include ED & PAULINE and LOVE & TAXES. ED & PAULINE is a film about cinephiles in love…or not. Christian Bruno’s film tells how film critic Pauline Kael and Ed Landberg transformed a small storefront theater in Berkeley into a church for movie lovers. LOVE & TAXES stars Bay Area icon Josh Kornbluth in a semi-autobiographical comedy about his struggles to make ends meet as he begins a relationship during the “Haiku Tunnel” time in his life. The film is directed by his brother Jacob Kornbluth.

Additional Next Wave Films include HOT SUGAR’S COLD WORLD, WHEN I LIVE MY LIFE OVER NEXT AGAIN and DANNY SAY’S. With cameos by Jim Jarmusch and Dr. Neil deGrasse Tyson, HOT SUGAR’S COLD WORLD is a fly on-the-wall look into the life of Nick Koenig (Hot Sugar) as he creates one-of-a-kind music made entirely out of sounds from the world around him. An aging crooner played by Christopher Walken and his daughter played by Amber Heard star in WHEN I LIVE MY LIFE OVER NEXT AGAIN. A look at the life of Danny Fields, the little known Jewish godfather of punk rock is explored in DANNY SAY’S.

PLASTIC MAN: THE ARTFUL LIFE OF GERRY JERRY ROSS BARRISH follows San Francisco’s best known bail bondsman through his journey of breaking the hardworking Jewish family mold he grew up in, to diving head first into the world of art. Produced by SFJFF Founder Janis Plotkin and directed by William Farley.

PEGGY GUGGENHEIM: ART ADDICT offers a rare look into Guggenheim’s world: blending the abstract, the colorful, the surreal and the salacious, to portray a life that was as complex and unpredictable as the artwork Peggy revered and the artists she pushed forward. The film will screen for Bay Area audiences following its World Premiere at the 2015 Tribeca Film Festival.

THE ART DEALER is from renowned French director François Margolin (The Flight of the Red Balloon) and follows a Jewish woman who embarks on a journey to recover family paintings stolen by the Nazis. During her investigation, she discovers some family secrets are best kept hidden.

In honor of the 70th Anniversary of the End of the Holocaust WWII, SFJFF will present the following films:

Ordered in April 1945 by the Supreme Headquarters Allied Expeditionary Force, GERMAN CONCENTRATION CAMPS FACTUAL SURVEY is an official documentary about German atrocities and the concentration camps compiled with footage shot by combat and newsreel cameramen accompanying troops as they liberated occupied Europe. It was to be the film screened in Germany after the fall of the Third Reich – shown to German prisoners of war wherever they were held but it was never shown. Alfred Hitchcock consulted on the editing of the film.

A highly stunning, visual and emotional devastating film IN SILENCE celebrates the musicians whose lives were lost in the Holocaust. The film premiered at the 2014 Karlovy Vary Film Festival.

Hundreds of survivors from the German concentration camps arrive to the harbor of Malmö, Sweden. While they take their first steps in freedom Swedish news photographers film them. EVERY FACE HAS A NAME follows these survivors 70 years later as they watch this archive footage for the very first time and as they discover themselves, they re-experience the emotions from this special day.

An official selection of the 2015 Tribeca Film Festival, A NAZI LEGACY: WHAT OUR FATHER’S DID is the story of two sons of high-ranking Nazi officials who must come to terms with their fathers’ pasts, with different results in each son.

Before broadcasting on HBO, CLAUDE LANZMANN: SPECTRES OF THE SHOAH will be shown for festival audiences. The film is a documentary portrait of the French iconoclast, Claude Lanzmann, and the making of his masterpiece Shoah.

Immigration in Israel is addressed in MANPOWER, MUSSA and RED LEAVES. In MANPOWER, immigration police officer Meir, returns from a tour to Buchenwald concentration camp, a prize for decorated policemen, to a brutal deportation of African labor immigrants. An official selection of Hot Docs 2015, MUSSA follows a 12 year old boy who has refused to speak since his parents came to Israel from Ethiopia. In Bazi Gete’s RED LEAVES, an Ethiopian immigrant sets out on a journey through his children’s homes after losing his wife.

LGBT films include THOSE PEOPLE, PROBATION and DANNY SAYS. On Manhattan’s gilded Upper East Side, a young painter, Charlie, finds the man of his dreams in an older pianist from across the globe. If only Charlie weren’t secretly in love with his own manipulative best friend, Sebastian, who is embroiled in a financial scandal. In the wake of Sebastian’s notoriety, their tight knit group of friends must confront the new realities of adulthood in THOSE PEOPLE.

In PROBATION TIME the fragile bonds that make up a family are severely tested when our hero is faced with an intense break up and a sister who is fighting “demons”.

Since 1966, Danny Fields has played a pivotal role in music and “culture” of the late 20th century: working for the Doors, Cream, Lou Reed, Nico, Judy Collins and managing groundbreaking artists like the Stooges, the MC5 and the Ramones. An official selection of SXSW 2015, DANNY SAYS follows Fields from Phi Beta Kappa whiz-kid, to Harvard Law School dropout, to the Warhol Silver Factory, to Director of Publicity at Elektra Records, to “punk pioneer” and beyond.

Other highlights include THE GO GO-GO BOYS: THE INSIDE STORY OF CANNON FILMS (dir. Hila Madalia), an official selection of 2014 Cannes Film Festival, about Menahem Golen and Yoram Globus, who in pursuit of the American Dream turned the Hollywood structure upside down. THE MUSES OF ISAAC BASHEVIS SINGER (dir. Asaf Galay) is about the famous Yiddish writer and Nobel Prize winner who wrote with a ‘harem’ of dozens of translators behind him.