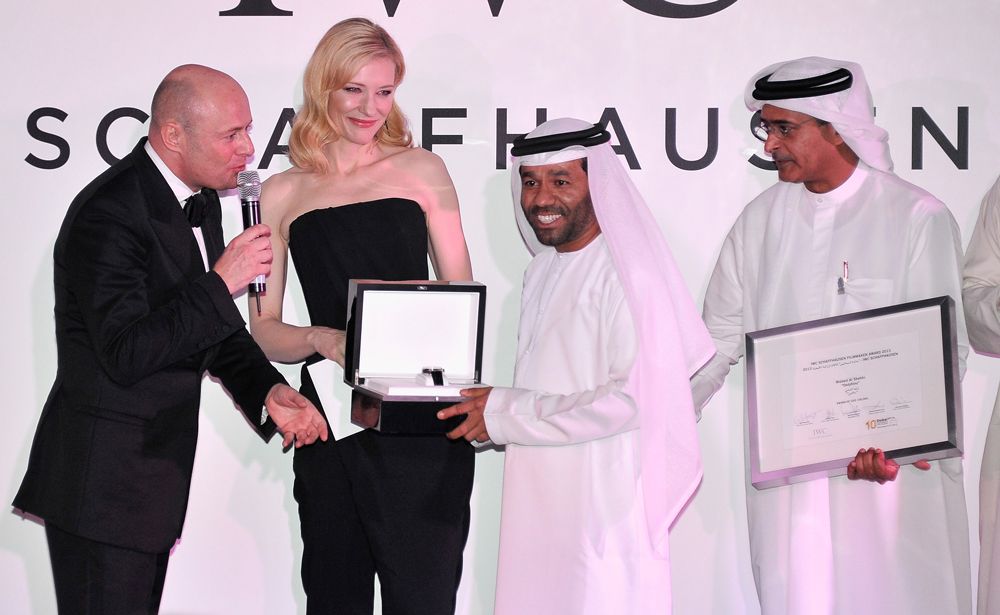 Three talented directors have made the shortlist for the prestigious IWC Filmmaker Award at the 12th Dubai International Film Festival taking place from December 9 to 16, 2015, with the winner receiving a cash prize of USD 100,000. The IWC Filmmaker Award supports filmmakers from the Gulf in taking their project from script to the big screen.

The nominees for the highly-coveted 2015 IWC Filmmaker Award are: Qatari director Khalifa Al Muraikhi, for his project “Sahaab”; Saudi director Shahad Ameen, for her feature “Scales”; and Emirati director Layla Kaylif for “The Letter Writer”. The winner of the IWC Filmmaker Award will be announced at an IWC gala event held during the festival on 10 December 2015.

THE NOMINEES AND THEIR PROJECTS:

KHALIFA AL MURAIKHI: “SAHAAB”
Renowned Qatari director Khalifa Al Muraikhi comes to the festival having already made a name for himself in the industry, winning awards at the Cairo International Film Festival 2000 and the Oman International Documentary Festival 2003 for “The Blind Girl” and “Threads Beneath Sands”, respectively. The director’s latest project, “Sahaab”, is another profound work which tells the tale of aspiring falconers preparing to take part in a race. When one of them loses his falcon, Sahaab, in the desert, the trio must face a variety of obstacles on their journey to find the lost bird in time for the contest.

SHAHAD AMEEN: “SCALES”
Shahad Ameen returns to DIFF this year, having premiered her short film “Eye & Mermaid” at the festival in 2013. The Saudi director has previously been nominated for Best Short Film at the Stockholm Film Festival but will be looking to go one better at DIFF 2015 with “Scales”, a fantasy feature that follows the story of Hayat, a pre-adolescent teen faced with fulfilling her destiny as a hunted, yet free, mermaid. Designed to capture audiences’ imaginations, the feature sees two worlds collide and sets out to explore the contradictions between belonging and freedom, and traditions and revolution, in an attempt to find reconciliation.

LAYLA KAYLIF: “THE LETTER WRITER”
Aspiring Emirati director Layla Kaylif is the founder of the Dubai-based film production company Canopus Films, and the two have joined forces to develop the director’s latest feature, “The Letter Writer”. The film is a romantic drama which tells a story of deception and lies as a young boy, Khalifa, uses his skills as a professional letter writer for personal gain at the expense of his trusting customers. One such customer is Mr Mohamed, the owner of a drapery shop, whom Khalifa befriends and assists in corresponding with his secret love, Elli. However, when Khalifa catches a glimpse of Elli for the first time, he is instantly smitten and begins a secret and forbidden pursuit of Elli’s affections behind Mr Mohamed’s back.