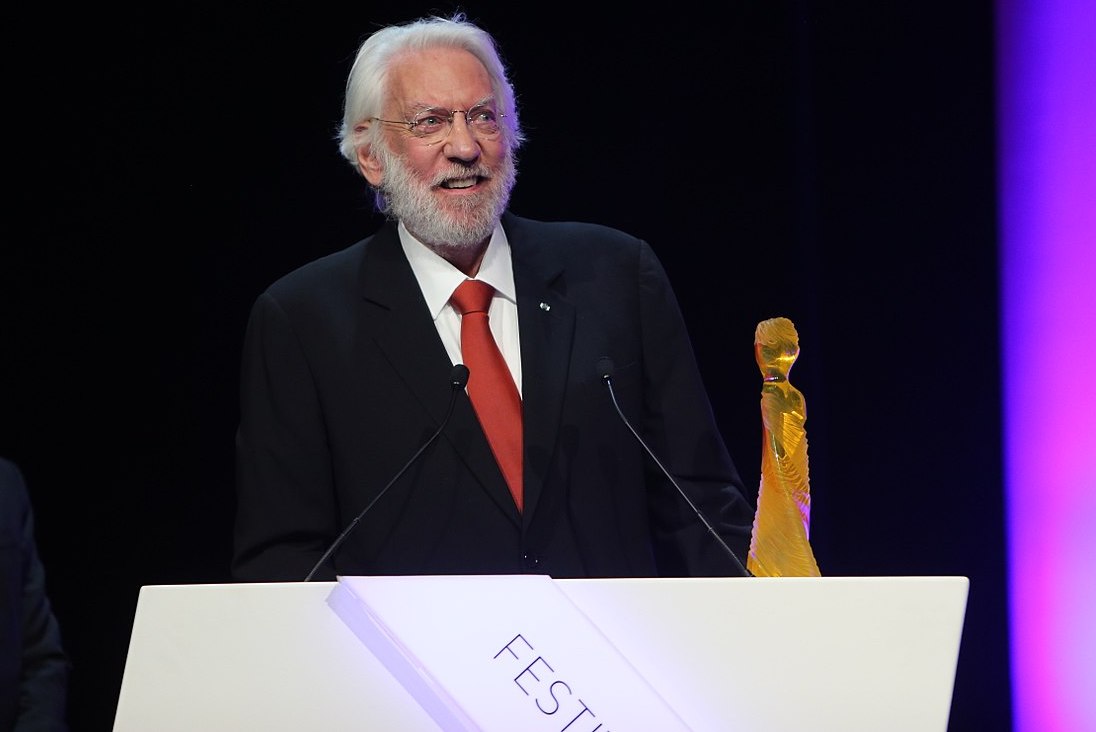 Actor Donald Sutherland, a veteran of the silver screen, with credits spanning six decades will be honored with the Lifetime Achievement Award at the 2018 Zurich Film Festival. Sutherland will also personally present his recent film ELLA & JOHN: THE LEISURE SEEKER, Paolo Virzì’s English language debut, in which Sutherland stars with Helen Mirren. The film is presented within the Festival’s retrospective of Sutherland’s work, which includes the following titles:

The Lifetime Achievement Award is one of the Festival’s most esteemed and is awarded across a range of fields within international filmmaking. Sutherland will receive his award on September 30, 2018.

ZFF Co-Directors Nadja Schildknecht and Karl Spoerri commented: “We are thrilled to welcome Donald Sutherland to Zurich and to present him with our Lifetime Achievement Award at this year’s Festival. Sutherland is an icon of, not just Hollywood but also international cinema, bringing his extraordinary presence to countless iconic roles over a truly formidable career. Sutherland’s body of work includes films that are broadly considered as classics, and re-defining, so we are extra pleased to be able to present this retrospective, including some of his best loved roles.”

Donald Sutherland is one of the most respected, prolific and versatile of actors, with a resume of well over one hundred and fifty films, including such classics as Robert Aldrich’s THE DIRTY DOZEN; Robert Altman’s MAS*H; John Schlesinger’s THE DAY OF THE LOCUST; Robert Redford’s ORDINARY PEOPLE; Bernardo Bertolucci’s 1900; Philip Kaufman’s INVASION OF THE BODY SNATCHERS; Nicolas Roeg’s DON’T LOOK NOW with Julie Christie; Alan Pakula’s KLUTE with Jane Fonda; Federico Fellini’s FELLINI’S CASANOVA and in Brian Hutton’s KELLY’S HEROES with Clint Eastwood, who later directed him in SPACE COWBOYS.

Sutherland stars as J. Paul Getty in director Danny Boyle’s current series TRUST. THE LEISURE SEEKER had its world premiere at the 2017 Venice Film Festival. He will next be seen on film in AD ASTRA, co-starring with Brad Pitt for director James Gray.

Sutherland was producer, screenwriter and star, voicing the lead character, of PIRATE’S PASSAGE, an animated movie based on William Gilkerson’s acclaimed novel, which won the 2016 international Kidscreen Award for Best Special or TV Movie.

Sutherland was President Snow in the THE HUNGER GAMES series. He has appeared as Nicole Kidman’s father in Anthony Minghella’s COLD MOUNTAIN; as Charlize Theron’s father in F. Gary Gray’s THE ITALIAN JOB and as Mr. Bennett, Keira Knightley’s father, in PRIDE AND PREJUDICE. For the latter he received a Chicago Film Critics nomination. He starred in FORSAKEN, a period Canadian Western, which premiered at the 2015 Toronto Film Festival.

He has starred as a voice in the animated feature ASTRO BOY; in Andy Tennant’s FOOL’S GOLD Gold; in Griffin Dunne’s FIERCE PEOPLE with Diane Lane; in Robert Towne’s ASK THE DUST with Salma Hayek and Colin Farrell; in AMERICAN GUN with Forrest Whitaker; in AN AMERICAN HAUNTING with Sissy Spacek; in LAND OF THE BLIND with Ralph Fiennes; in AURORA BOREALIS with Louise Fletcher and Juliette Lewis; in THE EAGLE, opposite Channing Tatum and Jamie Bell for director Kevin Macdonald; in Simon West’s THE MECHANIC with Jason Statham and Ben Foster; in Seth Gordon’s HORRIBLE BOSSES with Colin Farrell; in Mary McGuckian’s MAN ON THE TRAIN; children’s book adaptation, MILTON’S SECRET; and YA novel adaptation, MEASURE OF A MAN.