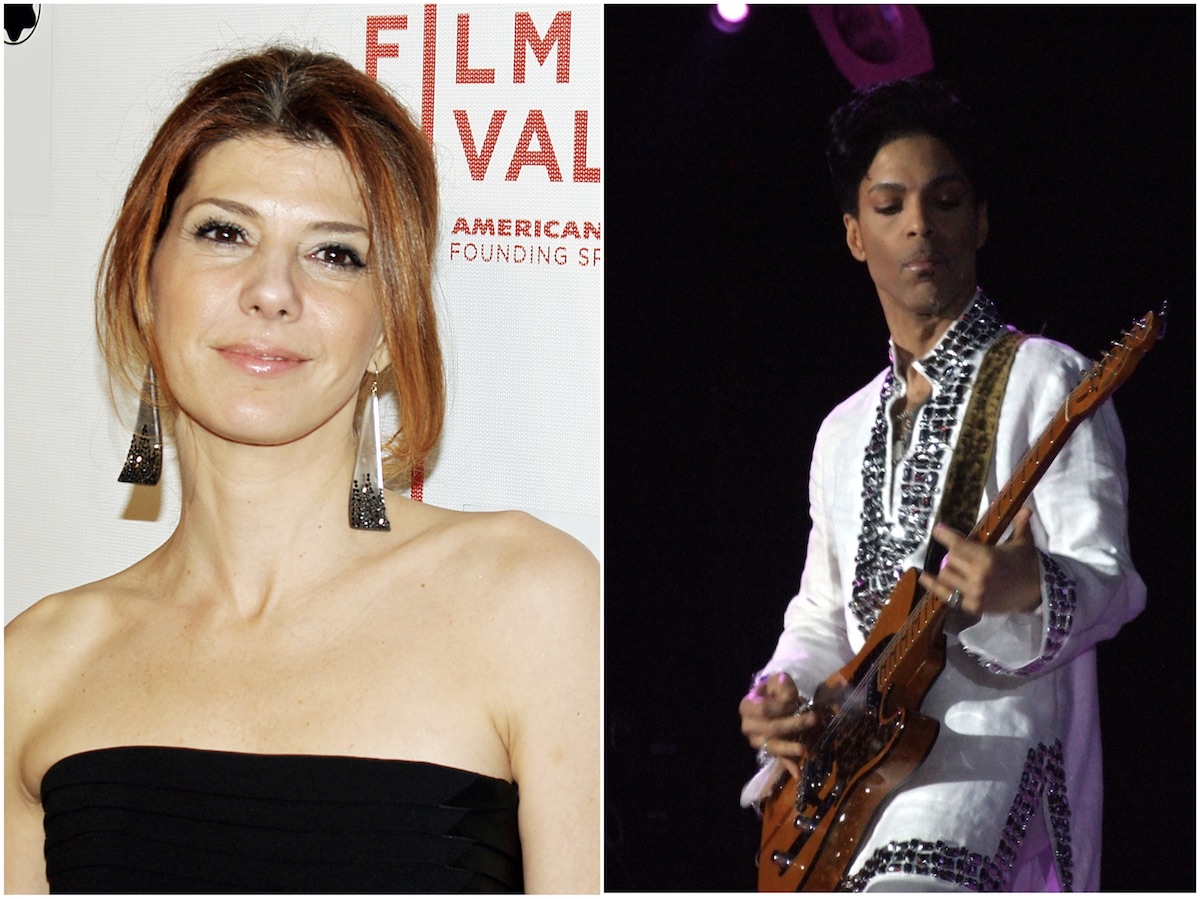 “As AFME continues its success with a fusion of movies, music and special events, we are very happy to present a stellar week of programming for the City of Albuquerque and out of town attendees,” said Ivan Wiener, AFME Executive Director. “Having filmmakers, musicians and celebrities from around the world converge at our festival has become a very cool experience for the community, especially for students of film, music and the arts who benefit through our non-profit.”

The fun and exciting lineup for 2018 includes a little bit of everything for everyone. Marisa Tomei is presenting the documentary SEED: The Untold Story which she executive produced; a special screening of Purple Rain followed by a Prince Tribute Concert with Prince’s original guitarist Dez Dickerson, musician Micki Free, Elton John and Billy Joel bass player David Santos, and the one and only Steve Ferrone, drummer from Tom Petty & the Heartbreakers; the 20th Anniversary screening of There’s Something About Mary with actor W. Earl Brown in attendance; a screening of Marvel’s The Avengers on Albuquerque’s Civic Plaza as part of AFME’s family events; and an after party celebrating the life and music of Tom Petty.

With 80 film projects from all genres screening throughout the week (highlights below), some of the other socially impactful discussions at AFME will focus on diversity and equality, gun violence and creating a safer community for future generations, combatting heroin addiction, the environment, and dementia and Alzheimer’s Disease.

Highlights of the 2018 Lineup Include:

Opening Night Movie: The Bikes of Wrath – 7:30pm at the KiMo Theatre. Oklahoma to California: 1600 miles, $420, 30 days, 5 bikes, 3 cameras, 2 guitars and one of the most influential novels of the 20th century — The Bikes of Wrath is a story of adventure, human connection, and an in-depth look at today’s America through the lens of John Steinbeck’s seminal novel, The Grapes of Wrath.

Killing Games: Wildlife in the Crosshairs – 3:00pm at the KiMo Theatre. In Killing Games, a groundbreaking exposé, actor, conservationist and Project Coyote Advisory Board Member Peter Coyote — with environmentalists, ranchers, public officials and Native Americans — brings these shadowy contests to light and speaks out against this hidden war on wildlife.

New Mexico Short Movies – From 5:30–7:15pm at the KiMo Theatre. New Mexico is one of the top film destinations in the world. Local filmmakers are showcased through their amazing projects. Teen Safe Driving PSA, Today, Survive by the Red Light Cameras, Eternity Grows, Pulse: The Beat of Art, Undying, OM+ME and Mrs. Murphy’s Confession.

Challah Rising in the Desert: The Jews of New Mexico­ – 7:00pm at the Jewish Community Center. Immerse yourself in the Jewish experience in New Mexico’s history. The feature documentary follows five settlements of the Jewish community in New Mexico, ranging from 400 years ago to the 1960s.

World Premiere of “14 Cameras” – 8:00pm at the KiMo Theatre. A suspense thriller, 14 Cameras tells the story of a family of four whose summer vacation turns dark when the rental home’s owner spies on them through hidden cameras, broadcasting their most intimate moments on the web.

Official After Party with Live Music by Jerry Hannan and Special Guests – 10:00pm at Duel Brewing Company. A distinguished songwriter and entertainer, Hannan recorded his own song, “Society” with Pearl Jam’s Eddie Vedder, which is featured in Sean Penn’s film Into the Wild.  “I Thought I Was You”, written by Jerry and brother Sean Hannan also plays in Into the Wild.

Panel: The Importance of Education in Film, Music and the Arts – 12:30pm at Hotel Andaluz. Both inside and out of the classroom, film, music and arts education enriches the lives of students. Join the discussion, featuring Glenna Voigt (WK Kellogg Fellow and the former Founding Principal of the Media Arts Collaborative Charter School in Albuquerque), Dodie Montgomery (an actor, writer, producer, director for film and theatre, and a visual artist who has appeared on stage in Krakow, Poland – Belgrade, Serbia , and Beijing, China and can be seen on Longmire, The Night Shift, Manhattan, The Brave, I Am That, and A Can Full of Ashes), Andrea Mays (Ph.D. in American Studies), Carlos Contreras and Andrew Barrow.

The Mad Hannans – 8:00pm at the KiMo Theatre. Brothers Jerry and Sean Hannan faced more than just sibling struggles; as bandmates, the pair went on a journey of rise, fall and reconciliation. This film of redemption features Sean Penn, Eddie Vedder, Jerry Harrison (Rock N’ Roll Hall of Fame, Talking Heads), and others.

Panel: Gun Violence: Shaping a Safer Community – 10:00am at Hotel Andaluz. How do we make our communities, schools, workplaces, and homes safer? Join the discussion on the pressing question facing our nation at this free panel, featuring Chris Schueler, Geri Lynn Matthews, Officer Gloria Marcott, and David Lane Williams.

Native American Film Block – 2:00pm at the KiMo Theatre. With documentary shorts and narrative shorts, this special event celebrates Native American films, including The Mayors of Shiprock, With Jackrabbit, and Neemkomok’.

Ol’ Max Evans: The First Thousand  Years – 5:00pm at the KiMo Theatre. New Mexican author Max Evans’ life was an adventure—from a teenage cowboy, to a WWII soldier, ranch owner, mining speculator, painter, and author of The Rounders and The Hi Lo Country. Max and Pat Evans will be in attendance.

Tribute to Prince: Purple Rain – 7:30pm at the KiMo Theatre. Enjoy a showing of the 1984 classic film with a New Mexico made music video to “Not Over You.”

Prince Tribute Concert – 9:30pm at Hotel Andaluz. Put on your best purple and white or diamonds and pearls for this fundraiser for the AFME Foundation. This once in a lifetime opportunity will showcase music by rock stars who knew and performed with Prince. Band includes Micki Free, Dez Dickerson, Steve Ferrone, David Santos, and local New Mexico musicians. Prizes will be awarded for best dressed in Prince related outfits.

Intimate Conversation with Andrea Mays: How to Watch a Film – 10:00am at Hotel Andaluz. University of New Mexico’s Andrea L. Mays, Ph.D. will lead this workshop on strategies to get the most out of your film screening.

Documentary Filmmaking 101 with Chris Schueler – 4pm to 7pm on Friday; 10am to 1pm Saturday at Hotel Andaluz. Emmy© Award-Winning Producer and Director, Chris Schueler will lead an intensive class on documentary production. Attendees must attend both sessions.

SEED: The Untold Story – 7:30pm at the Hiland Theater. Academy Award-winning actress and SEED Executive Producer, Marisa Tomei, presents this important documentary. As many irreplaceable seeds near extinction, SEED reveals the harrowing and heartening story of passionate seed keepers as they wage a David and Goliath battle against chemical seed companies, defending a 12,000 year food legacy.

The Maestro – 8pm at the KiMo Theatre. The Walking Dead’s Xander Berkeley stars as Mario Castelnuovo-Tedesco, a master teacher to film composer Jerry Herst in this film, set after the Second World War.

When I Stutter – 10am at the KiMo Theatre. With the goal of bringing awareness and empathy to those who deal with communication disorder, When I Stutter showcases the stories of 19 people over the course of 4.5 years. Full of emotion, it is a must-see documentary.

Intimate Conversation with W. Earl Brown – 10am at Hotel Andaluz. Join star of Deadwood, Preacher and There’s Something About Mary for stories about his experiences in the industry.

Sinatra in Palm Springs: The Place He Called Home – 4pm at The Guild Cinema. Sinatra loved Palm Springs and the Coachella Valley. This documentary details his unique lifestyle and the spirit of the Sinatra era.

20th Anniversary: There’s Something About Mary – 6:30pm at the Hiland Theater. Join us for the Farrelly Brothers’ hit where a man gets a chance to meet up with his dream girl from high school, even though his date with her back then was a complete disaster. W. Earl Brown (Warren) and others in attendance.

The Divide – 4:30pm at the KiMo Theatre. Directed by and starring Perry King, the film is set in 1976 California and follows an aging rancher with a failing memory through the struggles of family and reconciliation. -ago tragedy collide to create the backdrop for this classic American Western.

Jeff Bridges Presents Living in the Future’s Past – Closing Night Movie. 8:00pm at the KiMo Theatre. Academy Award® Winner, Jeff Bridges, presents a poignant and beautiful tour de force of original thinking on environmental challenges and the future of our world. Q&A to follow.

Official Closing Night After Party at Hotel Andaluz – 10:00pm with live music by Eli Del Puerto y Los Encantos. You never know who will join the band on stage. Last year it was Jeff Bridges and T Bone Burnett!

AFME Awards Brunch – 11am to 1pm at Hotel Andaluz. Presentation of awards to filmmakers and special guests at AFME.

AFME Casting Call with Elizabeth Gabel and Lorrie Latham – 2:00pm to 5pm at Hotel Andaluz. Want to get more involved? You can learn about being an extra and become eligible to be cast for projects shooting in New Mexico this summer. Lorrie Latham from Godless, Only the Brave, and Night Shift, teams up with Elizabeth Gabel from No Country for Old Men, Logan, Hostiles and Sicario will be on hand for this AFME sponsored extras casting call.

The year’s 2018 AFME Music Award will be presented to Steve Ferrone, esteemed drummer for Tom Petty and the Heart Breakers, previously of Eric Clapton’s band, and the Average White Band.

14 Cameras Challah Rising in the Desert: The Jews of New Mexico­ Killing Games: Wildlife in the Crosshairs LIVING IN THE FUTURE'S PAST Marvin Booker Was Murdered SEED The Untold Story Sinatra in Palm Springs: The Place He Called Home The Best Of All Worlds The Bikes of Wrath The Divide The Mad Hannans (2017) The Maestro When I Stutter