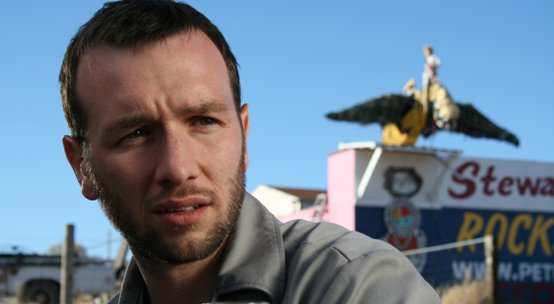 56 films have been selected to screen during the three day Derby City Film Festival held February 17th – 19th, 2012. The lineup includes 24 International films representing 16 countries as well as 8 World Premieres, 5 US Premieres, and 28 KY Premieres. Eight films were produced in the Bluegrass State and another 5 have ties to Kentucky.

Opening night includes two feature films shot in Kentucky. At 7:00 PM on February 17th  “Wid Winner and the Slipstream” will open the fest. “Winner”, which was directed by Kentucky native Alex O Gaynor, tells the story of two men who embark on a cross-country journey to face the past, change the future, and collect enough used-auto parts to build a time machine. The 8:00 PM film, “Sam Steele and the Crystal Chalice” is from New Albany filmmaker Tom Whitus and was shot in Downtown Louisville. The film stars Jacob Hays, Kevin Sorbo, Katherine McNamara & Dee Wallace. “Crystal Chalice” is the sequel to “Sam Steel and the Jr. Detective Agency” which screened at DCFF in 2010. The final film on Friday is the suspense film “Johnny’s Gone” from writer and actress LaDon Drummond. “Johnny’s Gone” tells the story of the unsettling but heartfelt relationship between Sarah and a two year-old she calls Johnny. Sarah hides a dark secret that will take them on a road trip across five states from California to Louisiana.

Saturday night features 3 more films with Kentucky roots. Louisville natives, and Ballard High graduates, Scooter Downey & Sean Elliot bring the feature “It’s in the Blood” to their hometown. Featuring Lance Henriksen, Elliot & Rose Sirna, “Blood”  tells the tale of a father and son who become stranded in the wild and must confront the horrors of their past to escape with their lives.  However, this wilderness is not what it seems, and as they deteriorate, so to does their concept of reality: horrifying creatures, ghostly apparitions, is it all in their heads, or could the truth be far more terrible? “It’s in the Blood” screens at 8:00 PM with the short film “Endless”.

At 10:00 PM on Saturday audiences will receive a double treat from Louisville filmmakers. First Kristofer Rommel premieres the short “Wireface: In the Beginning” starring Josh Loren, Cindy Maples & Joe Chrysler. “Wireface…” is a prequel film which details the slow decent into madness that turns a loving family man into the serial killer known as “Wireface”. Following the short is Matt Niehoff & Brian Cunningham’s feature film “Overtime”, which was shot in Louisville and features Al Snow, John Wells & Sebrina Siegel. “Overtime” follows two hitmen who find themselves caught up in a conspiracy they never imagined which includes alien zombies. Both films are included on one ticket.

Sunday February 19th features, among other films; the World Premiere of “Smells Like Community Spirit” from Cincinnati filmmaker Isaac Stambaugh, the controversial documentary “Israel vs. Israel” and “Legendary: When Baseball Came to the Bluegrass” from Lexington filmmaker Michael Crisp.

The closing film of the festival will be the Edward Furlong film “Below Zero”, which will screen at 6:00 PM on Sunday. “Zero” follows screenwriter Jack “The Hack” (Furlong) who, facing writer’s block and a crucial deadline, decides to remove himself from all distractions by locking himself in the freezer of an abandoned slaughterhouse, where fiction and reality blur. Inspired by true events, method writer Signe Olynyk’s BELOW ZERO is a twisty story within a story, within a real-life story. The film also stars Kristin Booth and Michael Berryman. “Zero” was directed by Justin Thomas Ostensen who’s film “By the Wayside” screened at the inaugural DCFF in 2008.

The following includes the full list of selected films for the 2012 Derby City Film Festival. Country and premiere status in ( ).