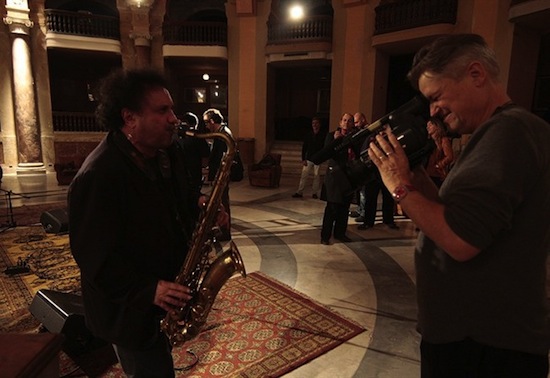 ENZO AVITABILE MUSIC LIFE directed by Oscar-winning director Jonathan Demme (Silence Of The Lambs, Philadelphia, Stop Making Sense) will kick off the Opening Night of the 16th Maine International Film Festival (MIFF) on Friday, July 12 at the Waterville Opera House. Jonathan Demme, the MIFF 2002 Midlife Achievement Honoree, will introduce his new film, which centers on Enzo Avitabile, the Neapolitan musician who’s blazing a world music trail in his collaborations with other musicians from around the Mediterranean and around the world, including Buena Vista Social Club’s Eliades Ochoa.

ENZO AVITABILE MUSIC LIFE is the first in a special section of MIFF 2013 called “Demme Does Music,” designed to highlight what the festival describes as Demme’s fantastic feel for and ability to convey the excitement of music. Although his feature films, including classics like Silence of the Lambs, for which he won the Best Director Oscar in 1992, Philadelphia, Melvin and Howard and Something Wild, invariably have a strong musical element, according to Festival Programmer Ken Eisen, it is Demme’s “beautiful portfolio of films directly centering on music and musicians that really shine with the excitement, power and thrill of Jonathan’s wonderful ability to wed film with music.”

ENZO AVITABILE MUSIC LIFE will open theatrically at Lincoln Plaza and a downtown theater in New York on October 18, and at the Royal and other Los Angeles area Laemmle theaters on October 25.  A national release will follow.